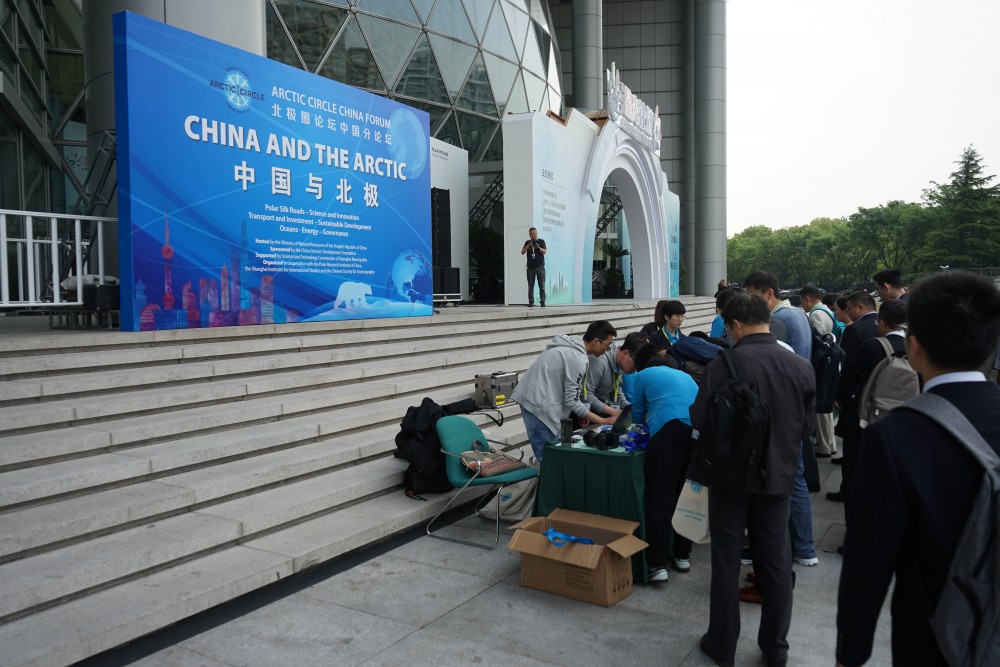 Participants signing up for the Arctic Circle Forum in Shanghai. Photo: Thomas Nilsen

China defines itself as a near-Arctic state and says it will actively participate with wisdom and strength to future protection and development.
Read in Russian | Читать по-русски
By

Protecting the Arctic environment is a common responsibility and we will make our contribution to this said Wang Hong, Chief of State Oceanic Administration with China’s Ministry of Natural Resources.

He was speaking at the opening of Arctic Circle China Forum in Shanghai this week. With more than 500 participants from some 30 countries, the event is the largest ever in China exclusively with an Arctic focus.

Wang Hong highlighted the need for urgent efforts to combat climate changes and proposed to strengthen international science cooperation to get a better understanding of the warming Arctic.

Climate changes in the Arctic impacts all of us. What happens in the Arctic is important for people in China, Wang said and proposed to expand joint expeditions into ice-covered waters in Arctic Ocean.

China has for years sailed its research icebreaker “Xue Long” (Snow Dragon) on northbound voyages, along Russia’s Northern Sea Route, across the central Arctic Ocean and through Canada’s Northwest Passage.

A second research icebreaker aimed for Antarctica and Arctic waters, named “Xue Long II”, will be commissioned later this summer and sail for the Polar Research Institute of China based in Shanghai.

Wang made it clear that China respects the sovereignty of Arctic nations, but wants to expand partnership with countries along what Beijing defines as the Polar Silk Road, one of the six silk roads within the Belt and Road initiative linking China with Europe through transport routes, infrastructure development, trading of natural resources and other areas of cooperation.

We will promote cultural and economic exchange, Wang said.

It was infrastructure development that was the top issue when Russian President Vladimir Putin in late April visited Beijing to attend Chinese President Xi Jinping’s top meeting on the Belt and Road initiative.

In July 2018, the first tanker with LNG from the Russian Arctic arrived at port in Rudong, China.

The Arctic Circle Assembly is an Icelandic initiative with annual gatherings in Reykjavik with additional Forums previously held in Korea, Scotland, Washington D.C., Greenland, the Faeroe Islands and other locations as international interests for Arctic affairs have increased over the last few years.

“The future of China and Asia is closely related to the Arctic and I’m delighted to see China actively participating in Arctic related dialogues and collaborations with a constructive attitude,” Grimsson said.

Zhang Xinsheng, former Vice-Minister of Education and now President of the International Union for Conservation of Nature, said China’s awareness of what happens up north is closely linked with climate changes.

“Especially young people and business people are concerned about Arctic climate changes. Arctic is not that far away,” he said.

Many officials from countries in Europe and North America participating in Shanghai arrived directly from the Arctic Council Ministerial in Rovaniemi, Finland, earlier this week.