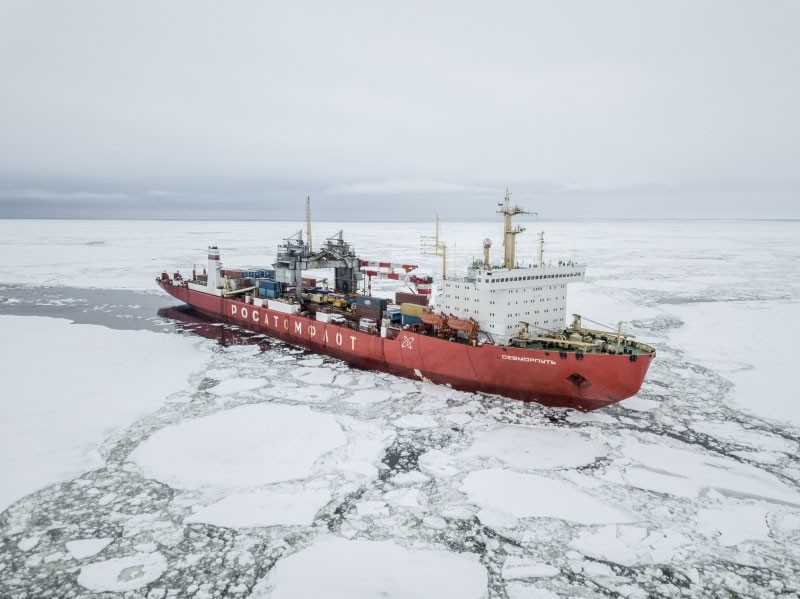 The "Sevmorput" joins west-bound convoy that will have to make it through thick sea-ice. Photo: Rosatomflot

The "Sevmorput" joins a convoy of vessels that will break its way across the Northern Sea Route.
Read in Russian | Читать по-русски
By

The 260 meter long nuclear-powered vessel early this week sailed thought the Bering Strait and into the Chukchi Sea. A thick layer of sea-ice covers the remote waters that mark the eastern end of the Northern Sea Route.

It is a rough voyage, even for a ship that is designed for sailing in up to a meter thick ice. After this winter’s early freeze, there is now a solid layer of fast ice along Russia’s Arctic coasts, and the waters of the East Siberian, Laptev and Kara Seas have up to 2 meter thick sea-ice.

Ships have struggled to make it across the region. In early November, more than 20 ships got stuck, and in January, four vessels became ice-locked after they delivered their cargo in Pevek.

The Sevmorput is escorted by nuclear-powered icebreaker Yamal. In the convoy is also heavy loads carrier Audax, as well as conventional icebreaker Kapitan Dranitsyn.

Both the Sevmorput and Audax have Murmansk as their destination.

Also nuclear-powered icebreaker Arktika might ultimately join the convoy. The new Russian icebreaker in late January completed its escort of cargo ship Lev Yashin, and will soon turn back to the Chukchi Sea.

Consequently, there might in only few days be three nuclear-powered vessels at the same time in the east Arctic waters. One of the icebreakers is expected to head to Pevek where two cargo ships have been trapped in the ice for almost a month.

The Sevmorput has been moored in Vladivostok since it in November sailed the Arctic route loaded with equipment and metal structures for the nuclear power plant currently under construction in Bangladesh.

The Sevmorput is the world’s only vessel of its kind. It is powered by one KLT-40 reactor, similar to the ones on board the icebreakers Taymyr and Vaygach.

In 2020, the vessel has to abort its voyage to the Russian Antarctic station Vostok after a propeller blade fell off outside Angola.

The ship was built in the period 1984-1988. In 1992-2006 she was used for transportation to ports along the Northern Sea Route. Later she was docked at the Atomflot base in Murmansk for years without assignments, and Rosatom was preparing to turn the ship into scrap metal.

In 2013 it was announced that Sevmorput would be renovated and put into service again. In early 2016, the ship underwent sailing tests in the Barents Sea.