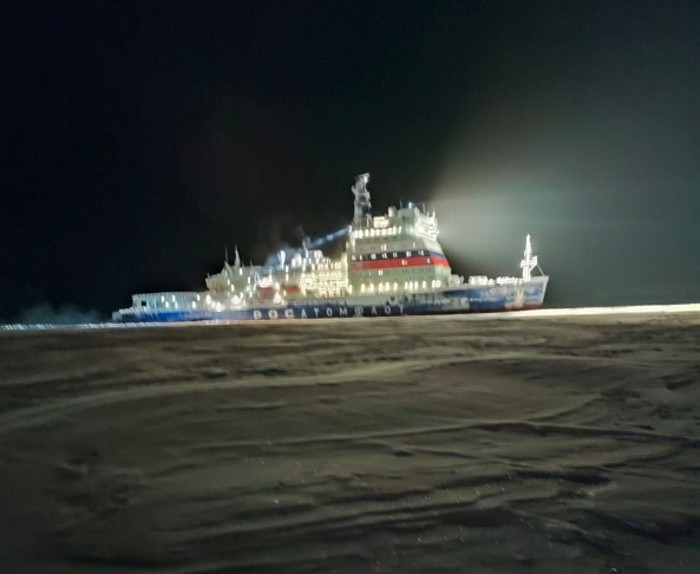 The "Arktika" for the first time on its way to Pevek. Photo: Rosatom

Results are satisfactory, says shipowner Rosatom as the "Arktika" arrives in the east Arctic town of Pevek.
Read in Russian | Читать по-русски
By

The super-powerful icebreaker on the 1st of January arrived in the remote Russian town together with cargo vessels Inzhener Trubin and Yuri Arshenevsky. Also diesel-engined icebreaker Kapitan Dranitsyn was part of the convoy.

It is the first time that the brand new Arktika sails across the eastern part of the Northern Sea Route. But it has not been an easy voyage for the potent vessel.

When the icebreaker two weeks ago sailed through the Vilkitsky Strait and into the Laptev Sea, there were three cargo ships in its wake. When it arrived in Pevek, only two were left.

The Polar King was abandoned en route, and is now drifting in an area north of the New Siberian Islands, shipping data show.

According to Rosatomflot, the icebreaker management company, the Arktika is now on its way towards the Polar King and will subsequently escort it to Pevek.

The three cargo vessels all carry construction goods for the major Baimskaya copper mining project in the Chukotka Peninsula. The ships were originally to arrive in Pevek already in November, but an early freeze in the far northern waters prevented them from reaching their destination. For several days, the carriers lied idle east of the Vilkitsky Strait waiting for icebreaker assistance. That never came and the ships ultimately had to return to Arkhangelsk.

The early arrival of winter spurred a highly complicated situation on the Northern Sea Route and in early November more than 20 vessels were stuck in the sea-ice.

The complications with the sea-ice stretched into the last days of the year. The last commercial ship that transited on the route, the Pugnax, has spent almost two week longer time on the voyage than expected. According to data from MarineTraffic, the ship was to arrive in Murmansk already on the 27th of December, but was on the 3rd of January still sailing in the northern part of the Kara Sea. The heavy loads vessel is escorted by nuclear-powered icebreaker Yamal.

The troubles on the route will be overcome as more icebreakers are built, Rosatom argues.  The Arktika is the first is the lead ship of Project 22220 icebreakers, and will over the next years be followed by at least four sister ships.

According to the state company, the Arktika is meeting expectations.

“We are satisfied with the results of the east-bound passage,” says Mustafa Kashka, General Director of icebreaker base Atomflot.

“The vessel’s icebreaking capacity is in line with the project characteristics,” he adds in a comment.

Rosatom will now carefully study results from the voyage as it plans further operations. It is not clear whether the Arktika will be the icebreaker that escorts the three ships back to Arkhangelsk.

Sea-ice conditions in Pevek can be extreme, and in the winter of 2017 three ships were ice-locked in the local bay for five months. Among those vessels were icebreaker Kapitan Dranitsyn.

The diesel-engined icebreaker will probably have great problems with breaking out of the area also this year unless a more powerful nuclear icebreaker comes to assistance. In the port of Pevek is moored also cargo ship Lev Yashin. That latter ship has already been ice-locked in the area for several weeks.

It is expected that the port workers of Pevek will need about ten days to unload the newly arrived cargo vessels.