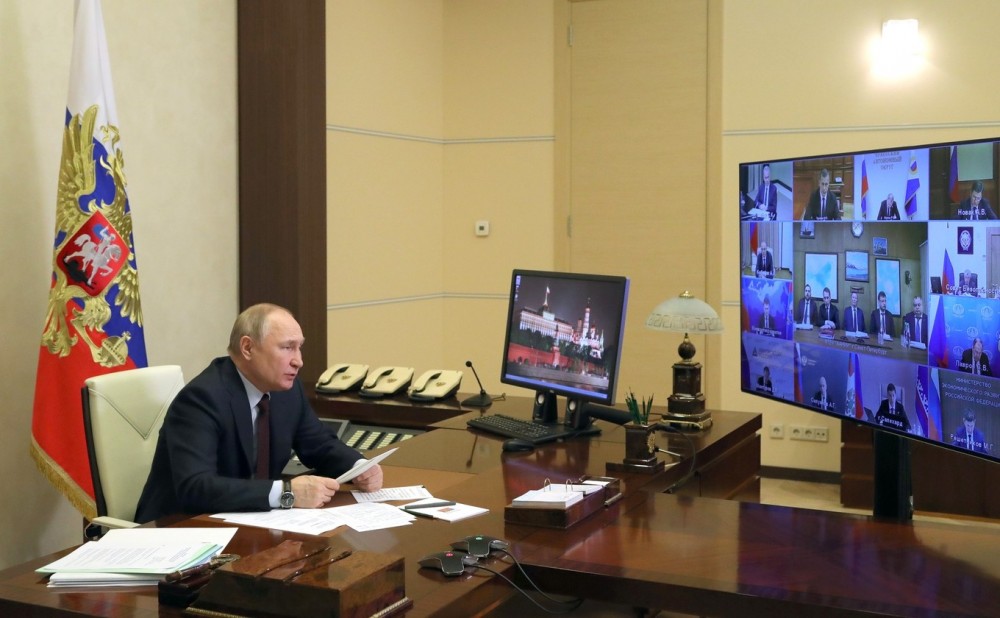 Vladimir Putin on Wednesday held a video meeting with key stakeholders on the development of Russia’s Arctic regions. Photo: Kremlin

"We have all the resources and all the opportunities to quickly find alternative solutions," Putin told the participants of the meeting on the development of the Arctic zone.
Read in Russian | Читать по-русски
By

The President called for “maximizing the pace of work” on both current and future projects and plans related to the Arctic.

“Taking into account various kinds of external restrictions and sanctions pressure, we need to pay special attention to all projects and plans related to the Arctic: Not to postpone them, not to change but on the contrary, we must respond to attempts to restrain our development,” Putin stressed.

Much of Russia’s oil, gas and mineral resources are extracted in the Arctic.

Several of the largest industrial projects under development, like the Arctic LNG 2 and Vostok oil field, depends on shipping along the Northern Sea Route. The region that over the past years has been a top priority for the Russian government is now about to face a serious economic setback.

Shortly after Russia’s invasion of Ukraine, private natural gas company Novatek, a major shareholder in both Yamal LNG and the coming Arctic LNG 2, said developments are in jeopardy as Western sanctions on Russian banks put needed funds on hold. Novatek is fully dependent on both investments and technology from its foreign partners, and the company might now ultimately have to halt the development of the Arctic LNG 2.

As Europe wants to cut Russian energy, shipping to markets in Asia becomes a priority for the Kremlin.

The Barents Observer has previously reported about big challenges in Murmansk as wagons and tankers with oil to be reloaded and transported to markets in Europe queue up. Last week’s EU decision to curb coal imports from Russia will also have a huge impact as Murmansk is one of Russia’s largest export harbors for coal.

In his speech on Wednesday, Putin said the West’s refusal to cooperate has provoked an energy crisis that already has hit millions of Europeans.

“For these countries, prices are rising everywhere and inflation is simply going through the roof,” the President said and added that the situation also creates problems for Russia.

Putin, however, noted that Russia will find alternatives.

“New windows of opportunity open up for us,” he said according to the transcript from the meeting posted by Kremlin.

Putin stressed that the sanctions would strengthen Russia’s independence.

“Of course, it creates certain complications for us in the current situation, but we have all resources and all capabilities to quickly find alternative solutions, and, in the long-term perspective, to even further reinforce our independence from external factors. An extremely important task,”

The President said domestic consumption of oil and gas should increase, stimulating processing of raw materials. Also, Russia aims at increasing supply of energy resources to other regions of the world.

Putin said the responsible ministries and state agencies should now give an extra push to develop Arctic infrastructures like railways, ports, and icebreaker construction.

While criticizing Western states for sanctioning Russia’s development plans in the north, the President called for international cooperation with others, like non-Arctic states.

“Let me emphasize that Russia is open to joint work with all interested partners in the framework of both current and future programs and projects in the Arctic,” Putin said.

“There will be enough work for everyone here,” the head of state told his loyal listeners via video-link from the presidental bunker.