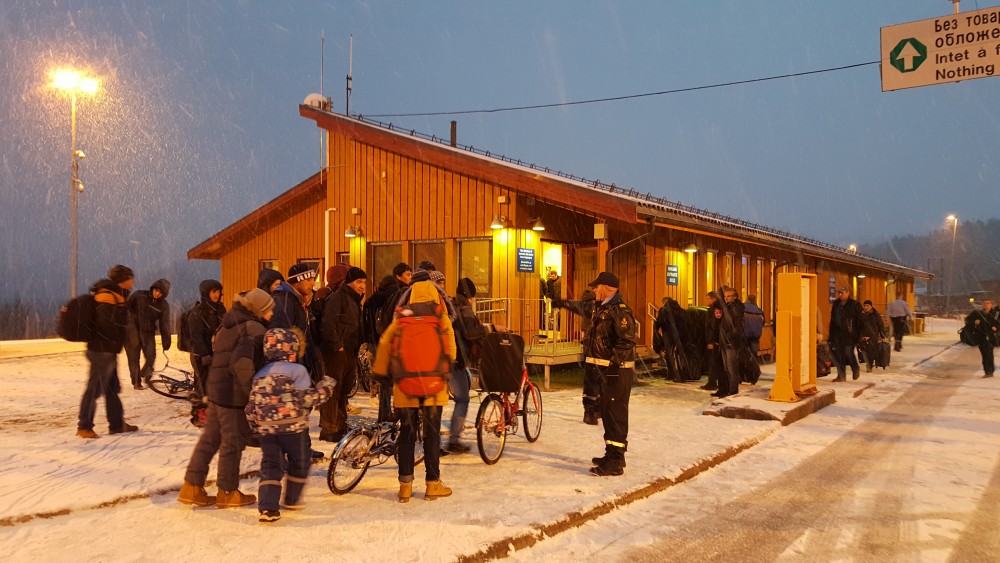 More than 5,000 migrants came via the Arctic Route from Russia to Norway's Storskog border checkpoint outside Kirkenes. Since Russia don't allow people to walk over the border, they came on bicycles. Photo: Thomas Nilsen

National Police Immigration Service will not reveal how many people will be given a bicycle for return to Russia.
Text og photo:

More than 5,000 migrants and refugees came the Arctic Route to Norway via Russia’s Kola Peninsula this autumn and early winter. Now, the return has started after Norway changes its law in November and sent instructions to the Directorate of Immigration and to the police responsible for carrying out these orders.

Last week, the Independent Barents Observer reported that families with children were returned to Russia at Storskog checkpoint in freezing cold on bicycles.

That news worries Karin Andersen, Member of Parliament for the Socialist Left Party. She sent a question to Norway’s Minister of Justice and Public Security Anders Anundsen asking for assurances that none of the children returned are at risk in the freezing cold.

Police will not reveal numbers

Norway’s National Police Immigration Service are in charge of returning people out of the country. Asked about how many people are returned to Russia, the police don’t have the numbers, nor how many of those are children.

“We will publish the numbers as soon as possible, likely in the beginning of the week,” says Tuva Otterlei Blikom, Communication officer with the National Police Immigration Service.

Last week, NRK reported that in total, some 200 people are sent back at Storskog border checkpoint.

Otterlei Blikom will not tell how many are up for return at Storskog.

“Russia is a refugee producing country”

Human Rights Groups claim Norway is at risk of violating the principles in the UN Refugee Convention by returning people back to Russia.

“Asylum seekers and migrants report of long queues, missing or misleading information, corruption and lack of access to this system. This means that the asylum system in Russia is not working, and Norway cannot be convinced that Russia will follow her part of this agreement and give the refugees on her territory the treatment they are entitled to through the refugee convention,” says Lene Wetteland, Senior Adviser and Head of the Norwegian Helsinki Committee’s Russia department.

She points to the fact that Russia is a refugee producing country, forcing victims of human rights abuse and their defenders to flee the country.

“We are interested to hear which criteria the Norwegian authorities apply to when naming Russia a safe country,” Lene Wetteland asks rhetorically as she point to the fact that the web portal of the Norwegian Ministry of Foreign Affairs present official warnings against travelling to many regions of Russia like Dagestan, Tsjetsjenia, Ingusjetia, Kabardino-Balkaria (incl Elbrus), North-Ossetia og Karatsjajevo-Tsjerkessia, plus eastern and southern parts of Stavropolskij Kray, bordering to Chechnya.

“This is an exceptional low number for a state that hosts so many migrants and refugees.” ​

Since signing the Refugee Convention in 1992, only 808 persons are granted asylum in Russia by year-end 2014, according to a report published by Svetlana Gannushkina and Elena Burtina with the Civic Assistance Committee.

State Secretary Jøran Kallmyr in Norway’s Ministry of Justice told the Independent Barents Observer in late November that Russia is considered to be a safe country for migrants to return to.

“It is obvious that many of those arriving from Russia nowadays don’t have a need for protection and therefor don’t have the right of asylum,” Kallmyr said.

On November 30th, Norway places a line of police officers at the borderline to Russia and announced that no persons without a valid visa would be allowed to enter. Since then, not one single migrant has exited Russia’s checkpoint to Norway in the north.

Tuva Otterlei Blikom with the Police says those persons returned so far are people who have withdrawn their asylum applications and people that have not had their merits considered after Norway changed its immigration law.

The Helsinki Committee says there is a risk Norway with the return of people at Storskog could violate one of the most fundamental principles of the Refugee Convention.

“Russia has sent people further to their respective home countries where they risk torture and inhuman treatment, such as Tajikistan and Uzbekistan, and has also sentenced Syrians to be returned. One of the most fundamental principles of the Refugee Convention is the prohibition on refoulement, and by sending persons back to Russia, we risk violating this principle,” Lene Wetterland argues.

Last week, the newspaper Ny Tid documented that two asylum seekers from Chechnya who were rejected in Norway and returned to Russia were later found tortured and deceased under severely suspicious circumstances in Chechnya.

“This is an example of how mistakes can happen even when we take our time to consider asylum applications thoroughly – we are very concerned with the potential for mistakes when there is pressure and directives from the Norwegian authorities to consider these applications even faster,” Lene Wetteland says.