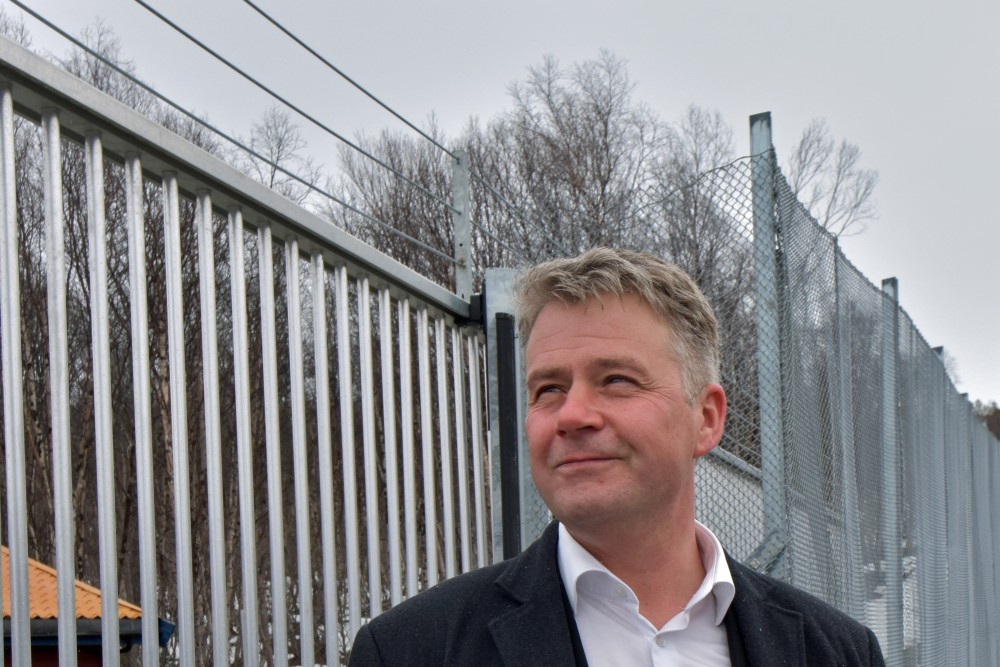 Norwegian Minister of Justice, Per-Willy Amundsen, likes the new fence at the border to Russia, but will not grant funding to new immigration and customs facilities. Photo: Thomas Nilsen

Cross-border traffic between Norway and Russia increases, but the checkpoint will still remain a bottleneck.
Read in Russian | Читать по-русски
By

Minister after minister have visited Storskog and been informed by travellers and immigration officers about the urgent need for new facilities for better control and faster crossings.

However, there are no cash, or promises of later funding, to Storskog in the budget proposal for 2018 presented by the government on Thursday.

Chief of Police in Finnmark, Ellen Katrine Hætta, says to the Barents Observer she is disappointed. In Norway, the Police is in charge of border and immigration control.

“We had hoped for it. I’m of course a bit disappointed.”

Traffic across the Norwegian, Russian border has increased by nearly 15% over the last year. Also, Norway has invested about 830 million Norwegian kroner (€88 million) in the new road, a 700 meter long tunnel and 200 meter long bridge aimed at making the drive between Kirkenes and Murmansk faster and safer. On the Russian side, the new road is far longer and investments much bigger.

“I understand the needs for good working conditions. Considering the development in traffic, it is not at all difficult to understand the need,” Minister of Justice, Per-Willy Amundsen, said to the Barents Observer earlier this year after being shown and told about the challenges.

The current building for passport and custums control at Storskog was built in the early 1990 and is dimensioned for 120,000 border-crossings annually. By the end of September, some 195,000 were already counted, expected to reach 270,000 by year end.

A few years back, two new passport control windows were opened in each direction, but queues are still long. Especially on Saturdays when Russians go shopping in the Norwegian border town of Kirkenes.

Ministry of Foreign Affairs spokesperson, Guri Solberg, says to the Barents Observer that this is for the Ministry of Justice to answer. The Justice Ministry, however, has so far not replied to the question about why there is no budget money for next year for Storskog.

Waiting for the Russians

In the National Budget, the Justice Ministry says it will wait and see what happens on the Russian side of the border.

“New border checkpoint should first be considered when there are further clarifications about the work with a new checkpoint on the Russian side. The Justice Ministry is in dialogue with Russian authorities about the matter, but has so far not received any clarifications.”

The Ministry says it will keep the Parliament updated about possible progress.

Russia is also planning to upgrade the Boriosglebsk checkpoint, a few hundred meters accross the border from Storskog.

The fence was by locals in Norway’s border town Kirkenes said to be a symbolic joke since intruders easily can walk around. The Government says the fence is necessary to stop refugees crossing into the country. Since November 30, 2015, not one single asylum seeker has entered Norway from Russia at Storskog.