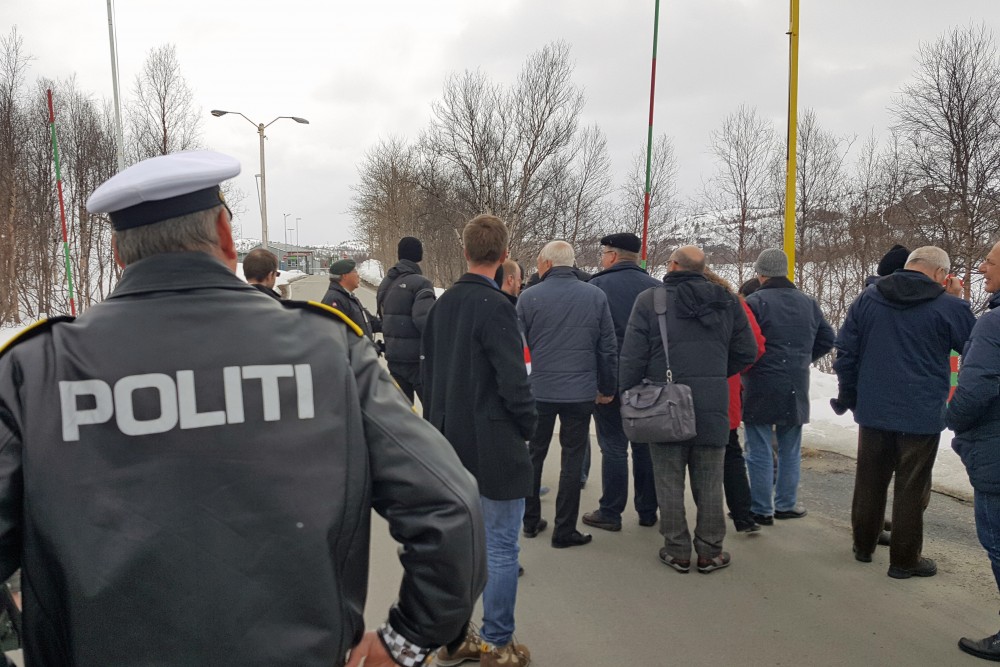 Norway's borderline with Russia is the northernmost entry and exit point to Schengen-Europe. Photo: Thomas Nilsen

Fingerprint checks for visitors from outside Schengen will be obligatory, but Norway is still undecided about possible e-Gates at Storskog checkpoint to Russia.
Read in Russian | Читать по-русски
By

In a overwhelming majority vote, the European Parliament backs the introduction of a common electronic system aimed at strengthening security, but also speed up checks at the Schengen area’s external borders. The vote on the proposal took place in the plenary session on October 25th.

The system, called Entry, Exit System (EES) will replace manual stamping of passports and will apply both to travellers requiring a visa and to visa-exempt travelers admitted for for staying inside the Schengen area for 90 days or shorter.

All third-country nationals entering the EU, except UK but including Norway and Iceland, will be fingerprinted and photographed at the border.

In practice, the new system could allow travellers who cross the Schengen area’s external borders to do so by themselves via ePassport-Gates, an automated self-service barrier operated at the border checkpoints. Although not being a EU-member state, Norway is member of the Schengen Area comprising 26 European states that have officially abolished passport and all other types of border control at their mutual borders.

At Storskog, Norway’s border checkpoint to Russia in the north, however, there isn’t space for any e-Gates in the narrow and occasionally overcrowded immigration facilities built in the early 1990s.

No space for e-Gates

«For Storskog, with today’s facilities, it is of little importance to introduce the EES with regard to more speedy control. If no new border checkpoint is built, all travellers will have to go through the check as it is done today. There are no e-Gates at Storskog and all control is done manually for each person,» says Ellen Katrine Hætta, Chief of Police in Finnmark with responsibility for border and immigration control at Storskog.

«We simply do not have any space for e-Gates,» she explains when asked by the Barents Observer how the decision by  European Parliament will influence Europe’s northernmost external Schengen border.

No cash for new Storskog

Asked the same questions, Norway’s Ministry of Justice and Public Security admits that some changes will have to be done at Storskog, but the Ministry can’t promise e-Gates.

«Introduction of EES does not imply any requirements to use e-Gates or other similar automated border control,» writes Linda Hafstad, spokesperson for the Ministry in an e-mail to the Barents Observer.

«However, there will have to come some changes in the procedures for border control aimed to facilitate for biometric data control,» Hafstad tells. «The National Police Directorate will examine how this can best be done at each individual border checkpoints.»

Regional authorities, police and Customs officials in northern Norway have for long said it is urgent to build a new checkpoint at Storskog. The Government has not been willing to put cash on the table.

Today, there are only random fingerprint checks in the passport control windows at Storskog.

Both the Ministry and the Chief of Police welcome the new EES requirements.

«It is positive that the new registration system will be implemented,» says Ellen Katrine Hætta. She points to better possibilities to stop possible terrorists and other criminals with false identity.

«It would both strengthen and speed up the border checks,» Hætta says.

EES is expected to be operational in 2020 and is a part of the smart border package presented by the European Commission last year.

In addition to being accessible to border and visa authorities, the data stored in EES will also be available for Europol, while national asylum authorities will not have access.

The new EES regime doesn’t apply for border-crossers traveling within the Norwegian, Russia visa-freedom agreement for citizens living less the 30 kilometers from the borderline.