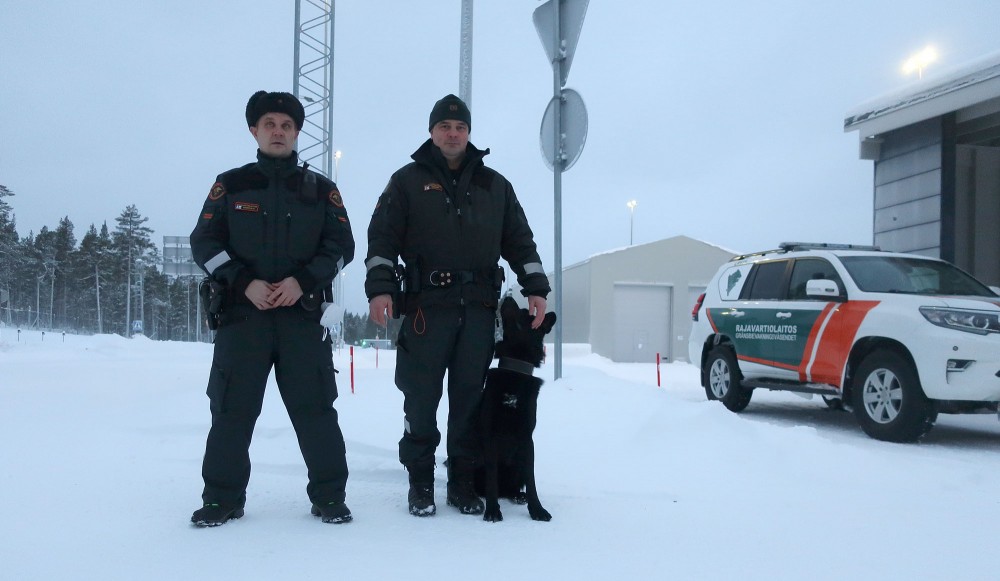 As previously reported by the Barents Observer, Lapland-Russia travel is down a drastic 97% from pre-Covid times. Despite this plunge in traffic, the northern border control stations have been anything but quiet. The need for temporary reintroduction of border control at internal borders in Finland has kept the staff busy and despite the slowing crossings, the staff at border stations have not had a chance to get bored. The Barents Observer visited Raja-Jooseppi border station, which is located 50 kilometres from Ivalo and works as the most important crossing point between Murmansk and Finland, to see how their operation has changed during Covid.

In the fall of 2021, the Raja-Jooseppi crossing station was transferred to brand new premises that allow better working conditions to its staff, more modern site as well as more streamlined transit at the crossing point. The newly built border crossing station has not seen much use yet - the new station has capacity for large traffic, but since its completion in the autumn of 2021, there have been some days when no one has crossed through the border. According to the border control officers, the station is currently averaging 3-4 crossings a day, which is a far cry from their pre-pandemic numbers. Because of limitations imposed by the Russian government to its citizens, movement between Finland and Russia has not yet increased. According to senior border guard Petri Keskitalo, most of the people crossing the border have some kind of connection or compelling reason to come to Finland; they have family or property on the other side of the border, for example. Truck traffic has not ceased either, and trucks have been arriving through the border throughout the pandemic. An additional side effect from the pandemic are people who wish to cross the border by foot, due to the lack of transport. Previously travellers could cross the border in ride shares, or even use the weekly bus service between Murmansk and Ivalo, which have now stopped. Raja-Jooseppi is meant for only vehicle crossings, and a separate permission is needed to cross the border by foot.

“We haven’t had any quiet time at all, except at the actual crossing point. Otherwise everything has continued as normal,” Keskitalo says. If anything, the officers have been busier than normal. The temporarily introduced border control at internal borders, that previously did not require one, has created a need for more staff across the northern crossing points to Norway and Sweden. Out of the 60 employees at Raja-Jooseppi, there has been enough to spare to support nearby colleagues. Keskitalo has just spent the previous weekend at Näätämö border crossing station with his colleague Jussi Martin. Senior border guard Martin explains that this kind of exchange is not usually done, but required during the extraordinary situation to offer support at exceptionally busy times.

Overall, Keskitalo and Martin’s everyday work has not changed a lot during the pandemic. While border crossings do not require a big workforce at the time, patrols on the border are still happening daily. A job as a border guard requires an outdoorsy nature; the guards can travel more than a hundred kilometres a day, keeping an eye out on the border using snowmobiles or quad bikes. During the summer, one of the border station’s dogs travels with them. The dogs at Raja-Jooseppi are trained to track human trails and find any items left by humans, but both Keskitalo and Martin agree that it is very rare to have anyone crossing the border without using the official crossing point. Their colleagues from the Russian side keep a close eye on the border too, and the vast wilderness on both sides is not appealing to anyone looking to cross to either country illegally. “There might be accidents where someone could venture into the border zone,” Keskitalo explains. Border zones run on both sides of the border, ranging from a few hundred metres to a few kilometres from the actual border. A border zone permit is required to access the zone, although the zone is still on the Finnish side.

If a person were to cross illegally, the Finnish border guards would have no difficulty finding them - in the winter, daily patrols and tracks on the snow would expose any wrongdoer. In the summer, the hard working dogs would find any illegal crosser with ease.

Both Martin and Keskitalo agree that the best part of the job is the possibility to work together with the dogs at the border station. Jussi Martin is the owner and trainer for one of the dogs, a two-year-old german shepherd called Cassu. The dogs are appointed to a specific border guard, who will take care of the dog from puppy age all the way to retirement. The dogs are working dogs first and foremost, they must follow their trainers command and be able to do their tasks without misbehaving. But they must also be sociable - the dogs live with their trainers and the trainer’ families, often from puppy age to retirement. It is easy to see how this is appealing to any dog lovers. Although being outdoors is one of the best parts of the job, it can also be one of the worst. Patrolling the border in the cold and dark January, in cold and windy conditions is not the most comfortable setting.

Like with many other professions, staff at the border stations have had to adapt to a new way of working - and it has kept them active. Hopefully soon, staff at Raja-Jooseppi can take their new premises into full use. Until then, the staff is kept busy by helping their colleagues in other stations, patrolling the border between Finland and Russia and even by training their dogs.