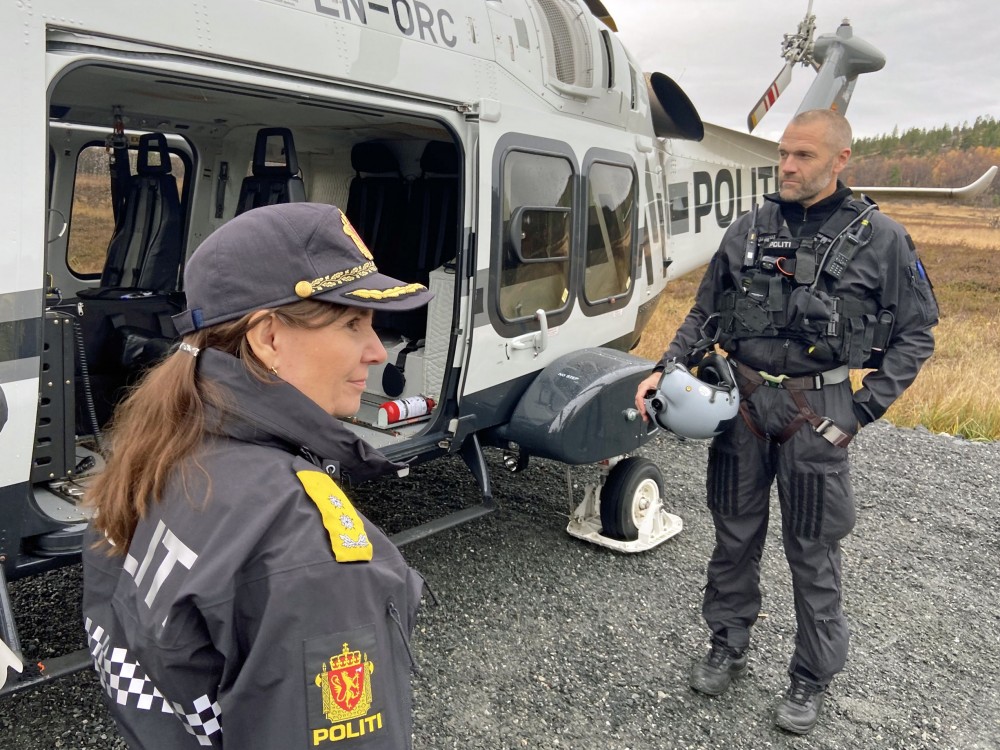 Norway deployed a police helicopter on the border with Russia for a short period last fall. Chief of Police, Ellen Katrine Hætta (left), wants it to come back for mid-winter search- and surveillance missions. Photo: Thomas Nilsen

A former commander with the Kremlin-linked Wagner private military company fled across the border to Norway in dramatic circumstances last Friday. Local police fear life and health are at risk if more illegal border crossers are coming in the polar night with temperatures down to minus 25 Celsius.
Read in Russian | Читать по-русски
By

“I believe we need to have the police helicopter stationed here in Kirkenes in the phase we are in today. It is often minus 25 degrees and still dark for larger parts of the day,” says Ellen Katrine Hætta to the Barents Observer.

She is Chief of Police in Finnmark and in charge of Norway’s control along the 198 km border with Russia.

“There is a human aspect in regard to our preparedness along the external border,” she underlines.

“If people cross the border illegally or attempt to do so in order to get to Norway, there can be a danger to life and health in addition to the security situation itself,” Hætta says.

“It is crucial to find people in the terrain quickly in order to save lives.”

The police choppers are equipped with high-definition infrared cameras, making it possible to find people in the darkness.

The border follows the Pasvik River, the creek in Grense Jakobselv and over the Jarfjord mountain. For the most far into the wilderness where it can take hours before Norwegian military border guards patrolling on snowmobiles and skies can reach.

It was dramatic when the Wagner defector ran in the cold across the Pasvik River in the middle of the night on Friday. FSB Border Guards started to shoot as they tracked the man’s footprints in the snow towards the border line which follows the deepest part of the ice-frozen river.

The Chief of Police wants the helicopter back north. Norway has three AW169 police helicopters based outside Oslo as well as one external private-owned helicopter in Tromsø on stand-by for police missions in Northern Noway. Tromsø, however, is an hour and a half flying time to the country’s border with Russia.

One of the Oslo-based choppers flew north last October but stayed only for a short period. This was a few weeks after Vladimir Putin announced mobilization of young men, and Norwegian authorities feared people without a valid Schengen visa could be tempted to leave Russia in the terrain.

Hætta notes that Norway must fulfill its international obligations on border control in accordance with the Schengen agreement.

“It is crucial to have extra attention and capacities for control missions along the Norwegian-Russian border,” she says.

The police in Finnmark have coordinated plans with the Finnish Border Guards who also have raised preparedness due to the dramatic developments in Russia. Both Norway and Finland are Schengen members and participate in Frontex, the European Union’s coordination agency for external border controls.

The Barents Observer has sent questions to Norway’s Minister of Justice and Public Safety, Emilie Enger Mehl, about the possible deployment of a helicopter in Kirkenes. The questions are for now unanswered.

Escaping war, running in snow across border to Norway