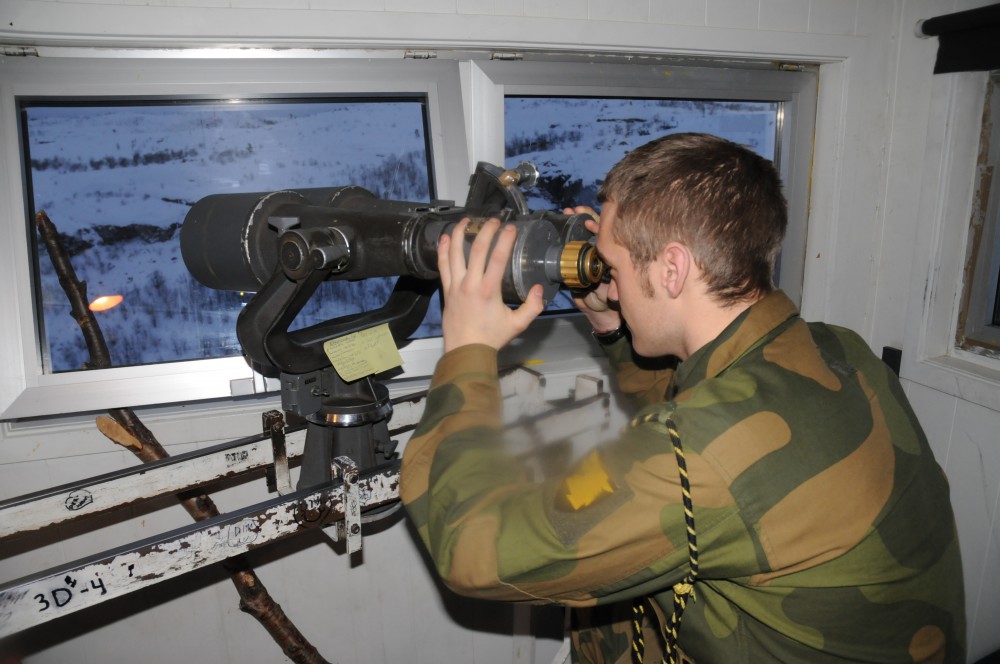 A Norwegian border guard in one of the many watchtowers along the 198 kilometres border between Norway and Russia in the north. Photo: Thomas Nilsen

The border guard is one of few army units in Norway not in possession of drones.
Read in Russian | Читать по-русски
By

With the mid-winter icy escape to Norway by a Wagner mercenary soldier, questions again arise about the border patrols’ ability to detect illegals seeking a safe haven in Russia’s Nordic neighbors.

“Drones have some added value”, says Major Jan-Petri Kovanen with the Finnish Ministry of Interior’s Border Guard Department in an email to the Barents Observer.

He confirms that drones are one performance among others used for all the statutory tasks of the Border Guard.

“Their performance or user experiences are not public information,” Kovanen notes.

Norway, sharing a 198-km border with Russia, has no plans to enhance border security with fixed-wing drones for monitoring and tracking possible illegal crossers.

“Drones are not in use for solving the border mission,” says Army spokesperson, Arnfinn Sjøenden.

The Garrison of Sør-Varanger (GSV) does have fixed-wing drones, but only for use by the Ranger Company, a unit specializing in invasion defense, says Lt. Col. Michael Rozmara, Chief of the garrison.

Sjøenden adds that different types of technologies for border guarding are under consideration, but it must be seen in the context of the impact this has on civilians in the border area.

Especially in the Pasvik valley, locals live close to the border river. Not everyone would be happy if camera-equipped drones flies over their private homes day and night.

The Puma drones now operated by all but the border guards can fly up to 20 km from the operator and stay airborne for more than three hours. Prime mission is surveillance and intelligence.

If based at Pasvik and Jarfjord border stations, such drone could be airborne within minutes after the alarm bell is triggered and help the soldiers to locate persons on the run in the terrain.

Last November, the Coastal Ranger Commando tested the drone’s capabilities from onboard one of Norway’s frigates off the coast of northern Norway, Forsvarets Forum reported.

Also the Coast Guard has employed a set of drones for different missions, including surveillance.

At costs hundreds of times more expensive than a drone, Police in Finnmark vow the urgent need for a helicopter to be deployed north as part of Norway’s border guard mission.

Such a dedicated police helicopter was sent north from Oslo last fall but stayed for a limited symbolic time before frost, snow, and polar night came.

Today, the helicopter stays in Oslo in a 1,400 km distance from the border with Russia. In emergency, the flying time to Kirkenes is at least 7-8 hours as refueling is needed in Finland or Sweden en route north.

Asked by the Barents Observer, Minister of Justice Emilie Enger Mehl says it’s for the Police in Finnmark to request a helicopter.

“I can’t exclude that it can be used again, but this is not for me to consider,” she says and points to the responsibilities of the Police Directorate.

The minister underlines that new measures could be introduced if the situation on the border with Russia changes.

“I expect there will be order at the national border,” she says.

Last fall, Helsinki unveiled a plan to construct up to 260 km of fences along the 1,340-kilometer border. In Lapland, the fences are planned to bolster areas near the crossing points at Salla and Raja-Jooseppi.

Unlike Norway, Finland has a dedicated border zone where civilians without a special permit are not allowed to stay.

Andrei Medvedev, the Wagner mercenary soldier that last weekend made it out of Russia’s multi-layer border curtain, is the first known to successfully cross the icy Pasvik River to Norway in winter in modern times. He is now in Oslo seeking asylum and willing to tell about potential war crimes he witnessed during his four months on the frontlines of Russia’s brutal war in Ukraine.

According the CNN, the Wagner defector had previously tried to cross into Finland twice and failed.

Medvedev told in an interview about the dramatic escape through the barbed wire fence and how he was traced by FSB guards. He ran towards the lights from the first house he could find on the Norwegian side. Medvedev knocked on the door and asked a woman to call the police.

At 1.58 a.m. Medvedev was detained by local police as he was walking along the road. The Norwegians had then been informed by FSB about the illegal border crossing in accordance with a bilateral agreement on incident at the border.

Locals in the Kirkenes area are now asking why the Norwegian Border Guards didn’t detect the illegal before being called by Russia’s FSB.

The rise and the fall of Norwegian-Russian relations. Interview with Ambassador Øyvind Nordsletten.