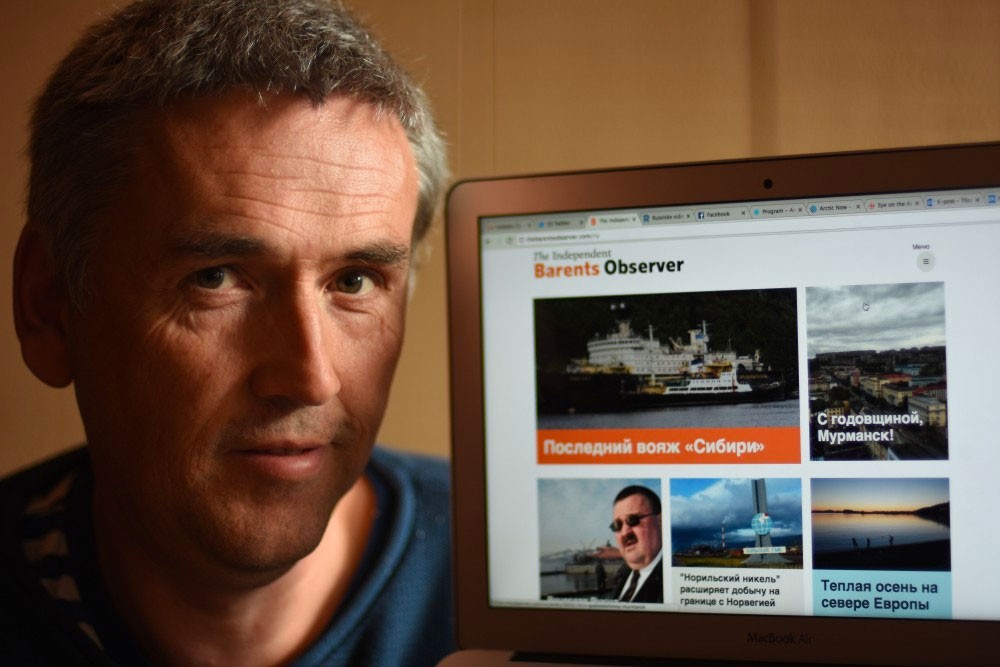 Thomas Nilsen is Editor of the Barents Observer, one of utmost few media organizations which publishes in both English and Russian. Photo: Atle Staalesen

The Federal Security Service says he poses a threat to Russian national security and bars him entry to the country for the next five years.
Read in Russian | Читать по-русски
By

When Thomas Nilsen on Wednesday afternoon arrived in Borisoglebsk, the border-crossing point between Russia and Norway, he was quickly taken aside by FSB border guards and told he was undesirable in Russia.

Nilsen was traveling with a delegation from the Danish Parliament´s Committee of Foreign Affairs. For the MPs, the trip to Murmansk was to mark a new and more conciliatory Danish approach towards Russia. Instead, they got a live-time feel with resurgent Russia’s handling of independent civil society representatives and the media.

“I was told it was necessary to deny me access to Russia for the purpose of state security. The officers could not elaborate further and it was obvious the decision was taken somewhere else,” Thomas Nilsen says.

The decision is made based on Article 27 in the federal Law on entry to and exit of the Russian Federation, a paper issued by the FSB’s border guards shows. The article reads that “Foreign citizens or stateless persons shall be denied entry into the Russian Federation where it is necessary for the purposes of the state security”.

The editor has a five-year multi-entry journalist visa and valid accreditation to Russia.

Cross-border journalism
Nilsen has long been a strong advocate for expanded cross-border cooperation between mass media and civil society groups in the Barents region. The Barents Observer is an independent and journalist-owned newspaper covering developments in the European and Russian Arctic. It is engaged in a comprehensive journalism cooperation with Russian colleagues and produces all its news in both English and Russian.

More trouble from Moscow
The expulsion comes a month after two Norwegian members of parliament were rejected entry to Russia, reportedly because they were on Russia’s list of sanctioned individuals. That put a planned Norwegian parliament visit to Moscow on hold. A public letter from the Russian Embassy in Norway subsequently accused Norway of conducting «a selective approach for cooperation, which is not tenable» and said that the country «ignores Russian interests».

At the same time, Russia’s then General Consul in Kirkenes, Norway, Mikhail Noskov, launched a fierce attack against the newspaper. In a conference on regional journalism in 2014, he used his presentation to strongly criticize the Barents Observer  for its news coverage.

The FSB’s entry denial of Thomas Nilsen is unprecedented in Norway and one of utmost few international cases of the kind.

However, several other Norwegians have over the last few years been kicked out of the country. In 2016, researcher Julie Wilhelmsen from the Norwegian Institute of International Affairs was declared a persona non grata. The same happened with businessman Atle Berge, who was accused of espionage. Wilhelmsen was denied entry for three years, while Berge will not be allowed to enter Russia before after ten years.

Regional relations in jeopardy
While relations between Oslo and Moscow over the past years have been fading, there has still been plentiful cross-border contact on a regional level. Both countries have promoted the Arctic as an area of continued cooperation and have proceeded with comprehensive joint actions. That picture of harmonic regional relations now gets a serious crack. The FSB’s action against Thomas Nilsen is not only an attack against independent media, but also a serious blow to cross-border cooperation in the region.

“This is a very troublesome development. In a period with increasing East-West tensions, Russia has said the Arctic is a territory of dialogue. If journalists can’t be a part of that dialogue, and FSB can kick out reporters of whom they disapprove, that is a cause of great concern,” says Thomas Nilsen.