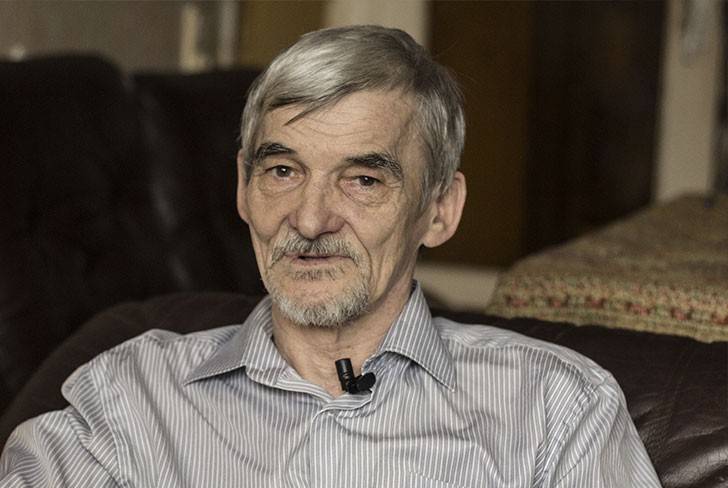 Yuri Dmitriev is out of jail. Photo: Sergey Markelov, 7x7-journal.ru

I never lost the spirit, says the civil rights defender. This weekend, he was released after more than a year in jail.
Read in Russian | Читать по-русски
By

«Let me say it this way: I did not waste my time there and did not lose faith», Yuri Dmitriev says as he makes it back home to his flat in Karelia.

The historian and civil rights defender was early Saturday released from jail. It took his many supporters by surprise and there was no-one to meet him by the prison gates. Without money and telephone, Dmitriev finally managed to get a taxi and make it to a friend’s house, 7x7-journal reports.

With the release comes an end to more than a year-long nightmare. On 13th December 2016, Dmitriev was arrested and charged for production of child pornography. A court case was opened in the Petrozavodsk City Court in July 2017. Court hearings were closed for visitors and journalists, and the charges were soon extended to also sexual abuse and illegal possession of weapons.

Meanwhile, public support mounted for the well-know historian. Almost 40,000 people signed a petition for his release and in July 2017 he was declared a political prisoner by Memorial, the civil rights group.

Expert on Stalin’s horrors in Karelia

Dmitriev was the one who discovered the Stalin-era mass graves in Sandormokh, Karelia, and he has written many books about the atrocities of the period. According to Memorial, the criminal case against Dmitriev has been politically motivated and aimed at stopping the activist from commemorating victims of Stalinist repressions.

Dmitriev has himself been regional leader of Memorial in Karelia.

Paradoxically, the prison in Petrozavodsk where Dmitriev has spent the last year, is far from unknown to him.

«I know about the fate of many of the people that were in this prison in the years 1937-1938, I know the people who were walking in these corridors and locked up in these cells, including in the one where I was», Dmitriev says in an interview with 7x7-journal.

«Now, I know about their situation, how it was for them to be locked up, their inner situation, their concerns. After all, also they were thrown in jail on some kind of false accusations. Also they were smeared, cut off from their families, called enemies of the state, spies, counter-revolutionaries and so on,» he adds.

«Now, I understand about what they were thinking back then,[…] how they were dreaming about seeing their family and close ones, how offending it was for them to be considered an enemy.»

Dmitriev now intends to go back to his writing of books. As he was arrested in 2016, he had only little left of a ten-year long project about forced resettlement of people in Karelia.

«I have to finish this book, because we must shed light on the additional about 126,000 people who were resettled, about whom everyone long ago has forgotten», Dmitriev underlines.

«From all over, they were brought here, and here more than half of them were killed and dumped in forest graves. This is were their descendants live, about 25 percent of the current population of Karelia are descendants and I want to give them information about their grandmothers, grand grand mothers and grand grandfathers.»

But the historian does not exclude that he might also write about the prison where he spent the last year.

«If not a separate book, it is very possible that I will write a chapter about the ones who passed through this prison», he says to 7x7-journal.