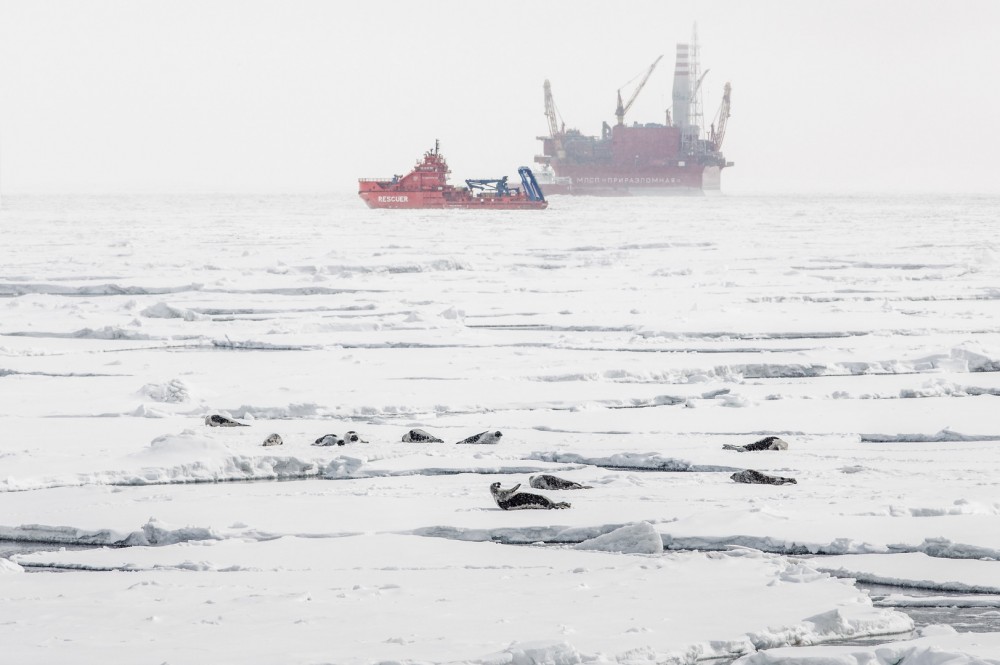 Gazprom Neft is among the most active Russian companies in the Arctic. It operates several far northern fields, among them the Prirazlomnaya project. Photo: Gazprom-Neft

A lobby offensive by Russia's biggest oil companies is followed by more relaxed eco-regulations for the far northern region.
Read in Russian | Читать по-русски
By

Companies Rosneft, Gazprom Neft and Lukoil have been pushing on the federal government for softer environmental regulations in the Arctic. New industrial projects can not be completed in time unless a more relaxed environmental regime is introduced, they argue.

The companies especially call on the abolishment of a required environmental expert assessment, a mandatory part of new project development since August 2020.

In a joint letter to Prime Minister Mikhail Mishustin, the company leaders say that new projects might experience significant delays unless the required expert assessment is dumped.

This “excessive” demand might ultimately hamper social-economical development in the Arctic, the companies argue. Furthermore, at risk is the ambition to ship 80 million tons of goods on the Northern Sea Route by year 2024.

The letter was sent in January 2021 and is referred to by newspaper Kommersant.

A positive response has now followed from the country’s legislators. On the 28th of January, a group of State Duma representatives presented a bill that includes the abolishment of the environmental expert assessment.

In a comment, the legislators underline that “the adoption of the law will positively influence the advance of construction of infrastructure objects that are of crucial importance for the development of social-economic development in the Arctic zone.”

The bill proposes to grant the federal government with the exclusive right to decide the specific cases where an expert assessment will be needed. It also states that new industrial projects can not be developed in national parks and areas subjected to environmental protection.

However, also protected lands are increasingly under pressure from industrial advance.

In 2019, the Russian government adjusted the borders of a national park in the Taymyr Peninsula on request from company Vostok Coal. The company’s projected Chaika coal terminal was located too close to the protected Bay of Meduza, a part of Russia’s Big Arctic National Park.

The same thing might happen slightly further south in the peninsula where oil company Rosneft is in the process of developing its grand Vostok Oil project.

At least three of the company’s projected fields in the area are partly located within the borders of a protected nature reserve. That includes the protected Brekhovskye Ostrova in the Yenisey river delta, an area that is inhabited by several groups of ingenious peoples.

According to environmentalists, Russia’s nature protection system is increasingly under pressure. In a recent meeting between Vladimir Putin and representatives of civil society organizations, Leader of Greenpeace Russia Sergey Tsyplyenkov explained that there are currently ongoing two legislative processes that could significantly undermine the system. Both bills propose to allow for border changes in nature reserves and national parks, he told the President.

“In this connection, I strongly request You to order the Government to provide for the full inclusion in federal legislation of a norm that includes a complete ban on the elimination of lands and forests from nature reserves and national parks […],” the environmentalist told Putin.

According to Kommersant, the federal Ministry of Natural Resources is ready to introduce liberalizations that will facilitate the industrial activities. That reportedly also includes Rosneft’s Vostok Oil project.

Paradoxically, the stronger pressure from the oil companies coincides with the Ministry’s announcement that it is abolishing its Department on the Arctic, Antarctic and World Seas. From now on, the activities on Arctic resources and nature protection will be managed by the Ministry’s remaining 11 departments, the announcement reads.