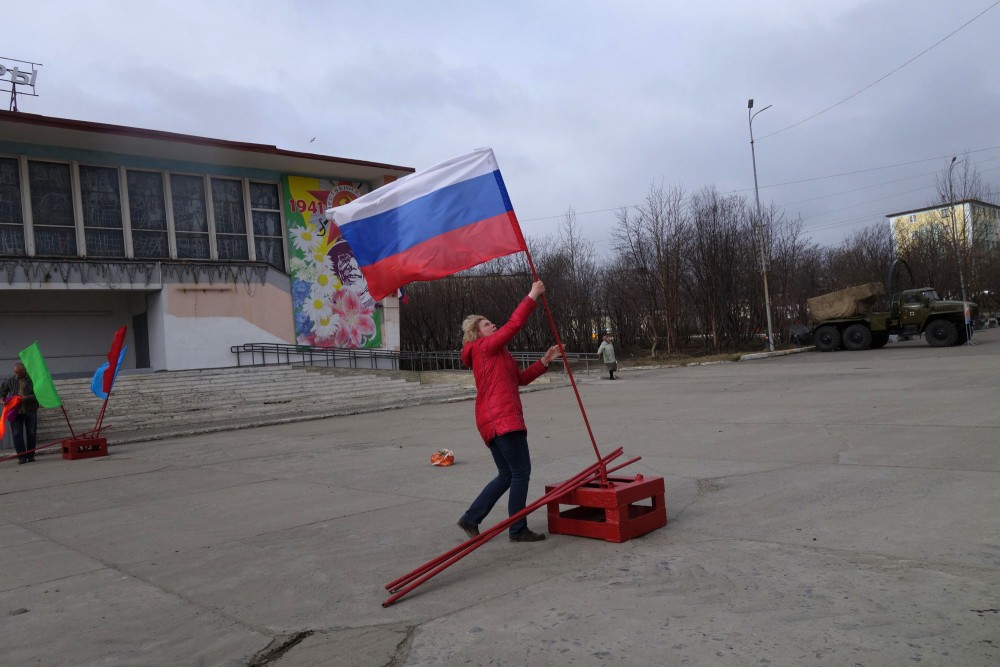 Growing discontent in regions could lead to a political reshuffle in towns and municipalities across Russia. In the country's far northern district of Pechenga, a wide coalition is formed to overthrow the long-ruling United Russia party.
Read in Russian | Читать по-русски
By

From the town hall of Nikel, local Mayor Aleksandr Morozov has a view towards the Pasvik River and neighboring Norway. The municipal leader has headed the border municipality of Pechenga for five years. He appears ready for many more.

Morozov has climbed the ladder in the United Russia Party and is today not only head of municipality, but also member of the powerful Murmansk regional party Presidium.

In April this year, he successfully carried out a disputed merger of the municipalities in Pechenga. Today, there are no longer local legislative assemblies in the towns of Nikel, Zapolyarny or Korzunova, only the district council of Pechenga rayon.

The merger has added power to Morozov’s position.

Like all across the country, United Russia has had a firm grip on power in Pechenga for almost 20 years. But the Party’s control in the district is now seriously challenged by a new and strong force.

Over the past months, local opposition parties have joint forces in a new coalition named the Team for Renewal. It includes political groups from across the specter, from local Communists, Liberal Democrats to the A Just Russia Party, as well as a big number of independent candidates.  They are determined to put an end to the power monopoly of United Russia, and it is the upcoming local elections of 13th September that is seen as the opportunity for change.

Opposition candidates from the Renewal Team are now running in all of the local 24 constituencies.

At the helm of the coalition stand Andrey Buyakin and Ruslan Belashov, two politicians with background from the Yabloko party and the A Just Russia. Together with associates, the two men have run an election campaign never before seen in the region. Their main tool of communication has been a channel at social media platform VK from where they have run numerous talk shows with invited guests. They have been around in the municipality and shed light on poor local infrastructure and mismanaged public services.

“No more! For 20 years they have shown us their attitude to the people, they have robbed us, knitted knots around our necks and weaved a web out of which we must finally get disentangled,” the election campaigners say about their opponents.

In its election program, the coalition highlights the need for a fundamental revamp of local governance, healthcare, housing services, as well an upgrades of schools and culture and sports facilities.

This year’s local elections come as the Pechenga district is at a crossroads with serious economic crisis looming. Nornickel, the mining and metallurgy company that employs an overwhelming part of the local labor force, will in the course of the year close its aging smelter in Nikel. Several hundred jobs will disappear and locals fear that their town is in danger of being desolated and abandoned.

The company that over the decades has discharged millions of tons of carbon dioxide from its huge plant might now have to pay billions to restore and re-cultivate heavily polluted local nature.

That compensation money will not come easy unless pressure is exerted on the company, the political opposition argues. Meanwhile, the powerful company apparently does whatever it can to support the candidates from the United Russia.

No wonder, the local Renewal Team’s election campaign appears no less aimed at Nornickel than the United Russia.

According to Buyakin and Belashov, the Nornickel company is heavily engaged in the local election campaign and has spent more than 50 million rubles on the hiring of a “spin doctor”.

Reportedly, Andrey Zhukov has been brought to Pechenga from the Siberian region of Krasnoyarsk. During his half-year stay in the area, Zhukov has established several news websites and information resources that now actively propagate the positions of United Russia and discredit the opponents from the Renewal Team.

Among the news channels believed to have been established by Zhukov and his associates are the Pravda Pechenga and Pechenga Reporter at VK, as well as several Telegram channels.

Zhukov and United Russia is accused not only of smearing the reputation of the opposition, but also of engaging in a massive fraud.

The Renewal Team believes a big number of Nornickel’s workers, as well as military conscripts, are actively brought to the polling stations for early voting. They are offered money in return for votes.

Video footage from polling stations appear to show several grave irregularities. In one of the video clips, a person waiting on site announces that the price for a vote on that day was $5.

Another video clip shows an aging man coming to a polling station to cast an early vote. But the man is told by election officials that the vote has already been casted by someone else.

“Then damn, why have they made me come here,” the man says, indicating that someone had persauded made him cast a vote.

A local allegedly persauded to cast early vote, is told by election officials that a vote already has been cast in his name. Video from vk.com/zapnovosti51

“The elections are being falsified by Nornickel and the local authorities,” a representative of the Renewal Team says to the Barents Observer. The opposition group now warns people against early voting and calls on them to show up at the polling station on election day.

Since it initiated its election campaign in early 2020, the Renewal Team has won major support in the population of about 36 thousand.

In early September, a local poll reportedly showed that about 70 percent of the electorate supports the opposition. However, since then, an aggressive campaign has been initiated by the United Russia.

Local officials now force people to cast their votes for the United Russia candidates, a representative of the opposition says.

“What kind of democracy is this? People are intimidated and forced to the polling stations and cast votes for United Russia. Many locals are now afraid of supporting the opposition,” the local representative says on the condition of anonymity.

“It is a farce,” he underlines.

If they come to power, the representatives of the Renewal Team say they will start “honest negotiations” with Nornickel with the aim of reaching a fair deal on restoration of the polluted ground around the closed Nikel smelter, and also initiate talks about possible new projects.

According to the opposition, there are significant nickel ore reserves in the area that can provide basis for major new projects. Among the fields that can provide impetus for new local growth is the Sputnik field, they argue.

The Barents Observer has requested comments from both Aleksandr Morozov and the Kola MMC (regional subsidiary of Nornickel) to this report, but not gotten any response.