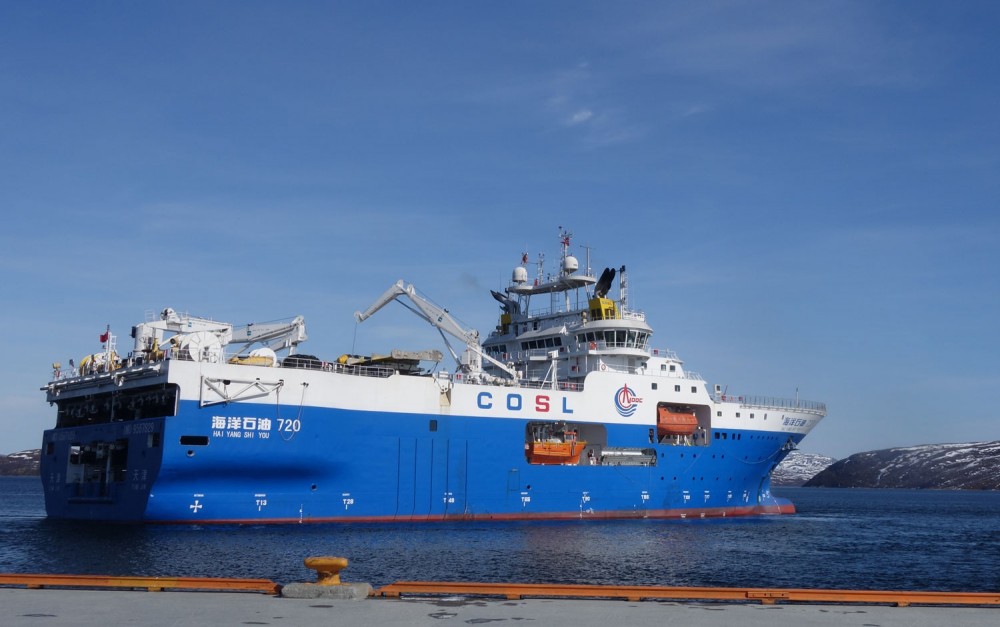 Chinese seismic vessel "Hai Yang Shi You 720" in 2016 did comprehensive mapping in the Russian part of the Barents Sea. Photo: Atle Staalesen

Russia’s state geological exploration company wants to spend 15 billion rubles of tax money on the construction of seismic ships for 3D Arctic mapping. That is not a good idea, two federal ministries say.
Read in Russian | Читать по-русски
By

State company Rosgeologia has run into a dispute with the Ministry of Natural Resources, which strongly opposes the company’s planned investments in new 3D seismic vessels for Arctic geological mapping.

The state company originally got the government’s blessing for the construction of the ships, which were to be built with Russian-made technology. Rosgeologia argues that the current Russian vessels are able to cover only about 20 percent of demands for 3D mapping.

The Ministry of Natural Resources disagrees. The two companies with obligations on the shelf — Gazprom and Rosneft — have already over-fulfilled their obligations, the Ministry argues.

In a letter obtained by Kommersant, the ministry also argues that seismic mapping over the next years might shrink with as much as 50 percent because of the current economic situation in the country. Efforts should rather be made to conduct 2D mapping, the ministry officials say.

Rosgeologia today has two vessels capable of conducting 3D seismic studies. Both are built in 1988.

Both Gazprom and Rosneft have over the last years conducted massive seismic studies in Arctic waters.

According to Rosneft, the company in 2016 conducted 35,000 km of 2D seismic mapping in ten of its Arctic license areas and another 5,100 square km of 3D mapping in four licenses. That was respectively 2,4 and 2,5 times more than required by the license agreements.

Rosneft controls a total of 55 licenses on the Russian continental shelf, of which an overwhelming share is located in the Arctic.

By year 2025, gas major Gazprom is committed to conduct at total of 23,5 thousand km of 2D mapping and 21,6 thousand square km of 3D mapping in its Arctic license areas by 2025.

Only in the Barents Sea, Gazprom is committed to conduct a total of 20,000 km of 2D mapping and another 9,000 square km of 3D mapping.

Gazprom has an estimated 33 offshore licenses in the Arctic.