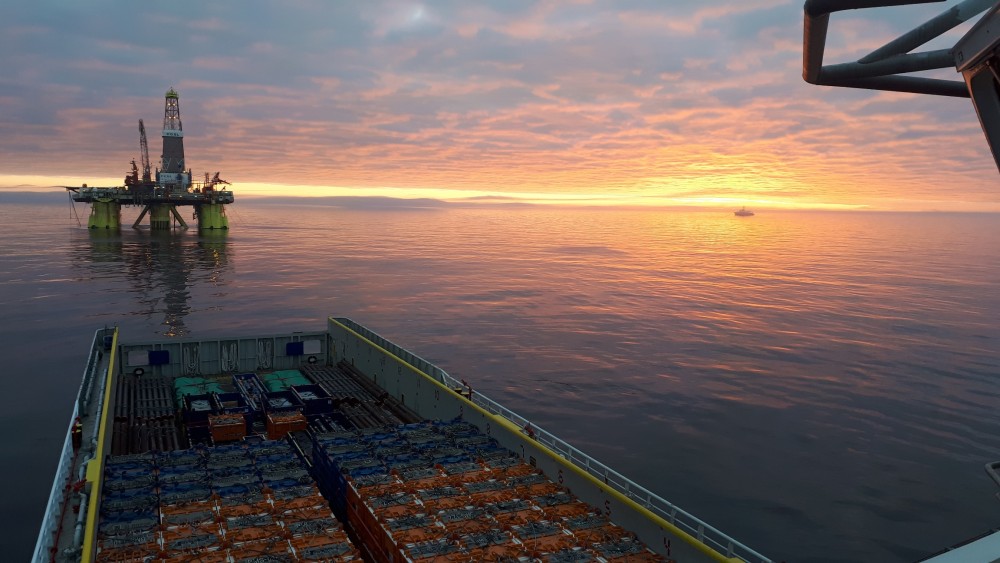 The drilling of two wells in remote Arctic waters is basis for an international meeting of oilmen.
Read in Russian | Читать по-русски

When the Chinese rig «Nanhai 8» set out from Murmansk on July 17th, it was accompanied by a Norwegian ship. The «Siem Emerald» towed the drilling installation all the 800 sea miles through the Barents Sea and to the Kara Sea drill site. The 91 meter long offshore supply ship has since been in the area to provide services to the Chinese drill men.

It is the second year in a row that the semisubmersible «Nanhai 8» is in the Kara Sea. In 2017, it discovered significant natural gas volumes in the Leningradskoye field. This year, it is drilling a well at Rusanovsky, a nearby license area owned by Gazprom.

Norwegian ships are also playing key roles in connection with the ongoing well drilling in the nearby Nyarmeysky license area. Drilling is conducted by semisubmersible rig «Arkticheskaya», an installation owned and operated by Gazprom subsidiary Gazflot. It left Murmansk on 19th July and has since been in operation along coast of the Yamal Peninsula.

On site near the «Arkticheskaya» is the Norwegian supply ship «Boa Bison», a vessel owned by company Boa, and the «Norsea Fighter», a ship owned by Vestland Offshore. In the area are also the «Sea Spear» and «Sea Supra», two supply ships owned and operated by Norwegian company Solstad Farstad ASA.

According to company Operations Director Bjørn-Inge Engene, «Sea Spear» and «Sea Supra» are engaged in supporting drilling activities at both the Rusanovsky and Nyarmeysky areas. The Kara Sea is ice-free at the moment and the ships will be on site until the end of the drilling, he says in a comment to the Barents Observer.

«We have operated in this area several times before and have gained solid experiences from ship management in this kind of remote areas,» he underlines

There has not been such a big number of Norwegian vessels in the Kara Sea since 2014 when ExxonMobil drilled its University-1 well in the area. That drilling was part of the U.S company’s comprehensive cooperation with Rosneft, and results showed the discovery of many million tons of oil.

The well was drilled by Norwegian rig «West Alpha» and logistical operations were comprehensive. About 2,000 people were involved in the drilling operations and most of them were Norwegians.

The cooperation between ExxonMobil and Rosneft came to a halt after Russia’s annexation of the Crimea and the subsequent introduction of western sanctions. The sanction regime prohibits key services necessary for deep water and arctic oil exploration and production. However, there is still a loophole for offshore supply services.