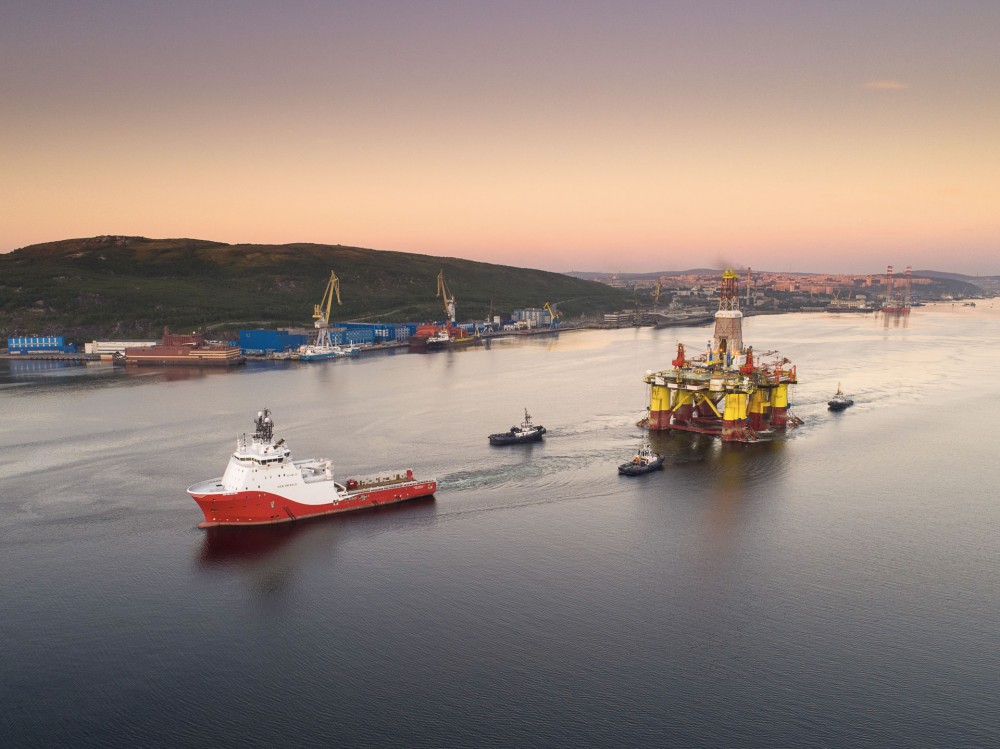 The "Nanhai VIII" was on 17th July towed out of the Kola Bay. Photo: Gazprom Geologorazvedka

Weeks after schedule, Gazprom is getting ready to drill two wells in the Kara Sea.
By

The rigs will be towed 800 nautical miles to the fields of Rusanovskoye and Nyarmeyskoye, two license areas controlled by Gazprom.

By the 25th July, the «Arkticheskaya» had sailed south of the Kolguyev island and into the Pechora Sea. The «Nanhai VIII», also known as the «Nan Hai Ba Hao», had made it to the southern coast of archipelago Novaya Zemlya, near the entrance to the Kara Sea, data from ship tracking service MarineTraffic show.

While the «Arkticheskaya» is towed by Russian supply ships “Almaz” and “Umka”, the “Nanhai VIII” is accompanied by Norwegian ship “Siem Emerald”.

Both rigs are long delayed. The towing operations from Murmansk were originally to take place several weeks ago, but complicated ice conditions in the Kara Sea have hampered progress.

The same complicated conditions have created major challenges for the ships serving the terminals in the Gulf of Ob, as well as for the Prirazlomnaya oil platform. On 25th July, major parts of the Kara Sea were still covered by ice. There is also ice in major areas in the Pechora Sea, data from the Russian Arctic and Antarctic Institute show.

According to Gazprom Geologorazvedka, a subsidiary of Gazprom, the «Nanhai VIII» and its tugboats will make a halt near Novaya Zemlya, from where they will be accompanied by icebreakers.

With the drilling at the Rusanovskoye and Nyarmeyskoye, Gazprom follows up its Kara Sea operations from 2017. Then, the same «Nanhai VIII» drilled at the nearby Leningradskoye field and discovered resources equal to 1,9 trillion cubic meters of natural gas.

This year, the «Nanhai VIII» arrived in Murmansk on 23rd of June.

The «Arcticheskaya», however, has not engaged in Arctic waters in many years. The rig early this year underwent a series of repair works in Singapore before it in March was sent towards Murmansk. The Kara Sea drilling is embraced by big expectations and rig owner Gazprom Flot ahead of departure organised a church service on board, during which the crew was blessed by a local priest.

Gazprom this summer also intends to drill a well in the Gulf of Ob. The 6,570 ton heavy jackup rig «Amazon» was in October 2017 transported to the shallow waters of the Ob Gulf, whereupon Gazprom Flot started to build up a new crew. It has spent the whole winter in the remote port of Yamburg. The «Amazon» was originally to engage in drilling in the course of July this year, but also this operation is likely to have been postponed.