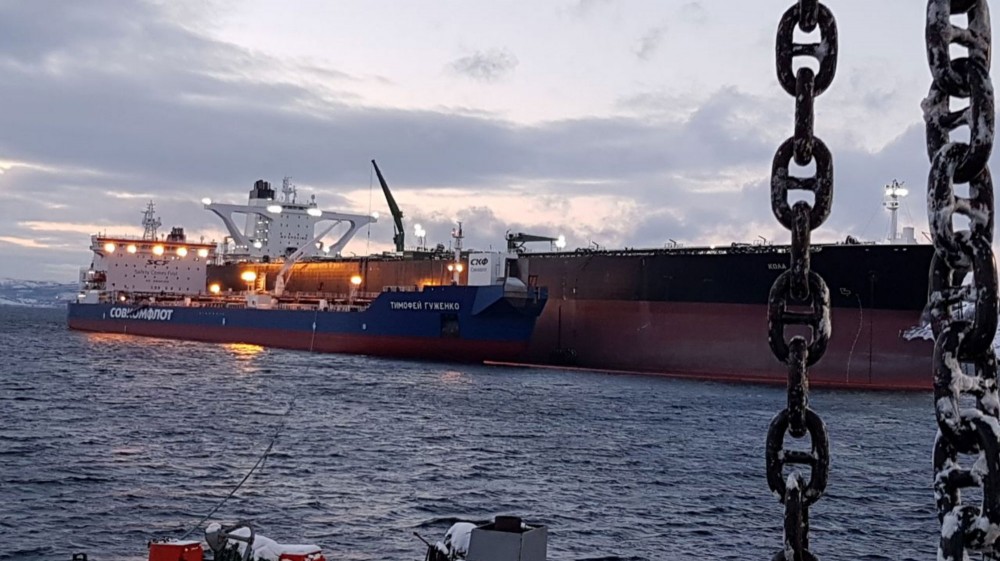 The 309 thousand ton big tanker «Kola» has been firmly anchored to the bottom of the Kola Bay as big volumes of oil are on the way from Lukoil’s Arctic fields.
Read in Russian | Читать по-русски
By

The «Kola» in late December 2017 found its permanent location near Cape Filinsky, few kilometres from the Murmansk city. It is the biggest terminal tanker operating in the Kola Bay, and was placed on site as Lukoil last year decided to abandon terminal facilities in neighboring Norway.

Almost ten months later, operating company LK-Volga confirms that the tanker has been firmly connected to the sea bottom. A total of 36 anchors, some of them up to 200 ton heavy, now fasten the position of the vessel. The measure is aimed at raising security around the ship, company Beluga Projects Logistics informs. The company, a heavy cargo logistics company, was contracted to do the operation.

The «Kola» is the biggest biggest terminal tanker in the Kola Bay. It receives oil from Lukoil’s Varandey port on the far northern Nenets coast. Ice-class tankers shuttle oil to the «Kola» and conventional tankers bring the oil further to Rotterdam and other west European terminals.

The 35 year vessel is a key part of Lukoil’s export scheme for Arctic oil.  The company is a leading company in Russian Arctic oil shipping and owns and operates the Varandey terminal on the coast of the Pechora Sea, from where major volumes of oil is pipelined from fields in the nearby Nenets Autonomous Okrug. In 2017, the Varandey terminal handled more than 7 million tons of oil, an increase of about 5 percent compared with 2016.

The Varandey terminal was built by Lukoil in 2008 and has an annual out-shipment capacity of 12 million tons. The terminal is located in shallow Arctic waters 21 km from the coast.

In the first eight months of 2018, a total of 4,5 million tons of oil was handled by terminal, which is a 22 percent drop compared with same period in 2017

The «Kola» is not the only terminal tanker of its kind in the Kola Bay. From before, Gazprom Neft operates the «Umba», a 300,000 ton tanker, located in the Arctic fjord. The «Umba» receives oil from Prirazlomnaya, Russia’s only oil-producing offshore field in the Arctic, as well as the Novy Port field in Yamal.