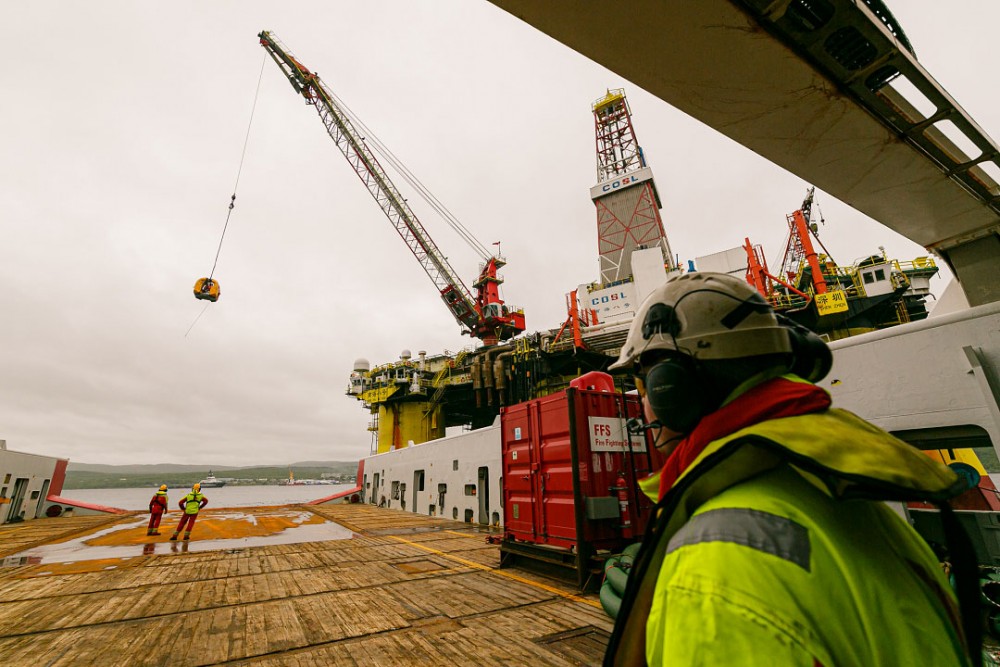 Chinese rig «Nan Hai Ba Hao» had a stop-over in Murmansk on its way to the Kara Sea. Photo: Gov-murman.ru

A fleet of supply ships surround the «Nan Hai Ba Hao» as it gets ready to spud a well in the Kara Sea.
Read in Russian | Читать по-русски
By

The Chinese rig also referred to as the «Nanhai 8» on the 6th July set out from Murmansk with course towards remote Arctic waters. Among the ships that towed the 15,469 deadweight ton installation was the «Siem Emerald», a support ship owned and operated by Norwegian company Siem Offshore.

The rig is now on site in the Kara Sea. According to information from authorities in Murmansk, it will drill on the Leningradskoye and Skuratovskoye fields, two license areas located along the west coast of the Yamal Peninsula.

In the area are also several more support ships, among them the «Siem Diamond», «Sea Supra», «Norsea Fighter», «Ocean Zephyr» and «Odin Express», information from the Russian Northern Sea Route Administration shows. The latter two are owned and operated by the Lavian company Baltic Shipping. The former three are Norwegian ships.

The Kara Sea has over the last three years been main offshore drilling area in Russia’s Arctic.

The «Nan Hai Ba Hao» first made it to the Arctic waters in 2017, when it drilled in the Leningradskoye license area and expanded the resource potential of the structure by more than 850 million cubic meters of gas to a total of 1,9 trillion cubic meters. The year afterwards, it was back in the area to drill in the nearby Rusanvoskoye area. Both operations were made in cooperation with Russia’s natural gas company Gazprom.

The Chinese rig is built in 1983 and is owned and managed by the China Oilfield Service Limited (COSL).

The «Nan Hai Ba Hao» will not be alone in the Kara Sea. Also the Russian rig «Arkticheskaya» is getting ready to drill in the area. The «Arkticheskaya» that is owned by Gazprom subsidiary Gazprom Flot reportedly set out from Murmansk on the 9th of July.

Still moored in the Murmansk port are Norwegian support ships «Sea Surfer» and «Sea Spear», both operated by Solstad Shipping.

The hydrocarbon resources in the Kara Sea are believed to be of vast proportions. Gazprom controls the lion’s share of the license areas. Novatek owns areas in the Gulf of Ob and in 2018 drilled in the Severo-Obskoye license. Results showed at least 320 billion cubic meters of reserves.

Also Rosneft owns major license areas in the Kara Sea. In 2014 it drilled at the field that later got the name “Pobeda” (Victory). The drilling was done in a major operation conducted together with U.S company ExxonMobil and results reportedly indicated resources up to 500 million tons of oil.