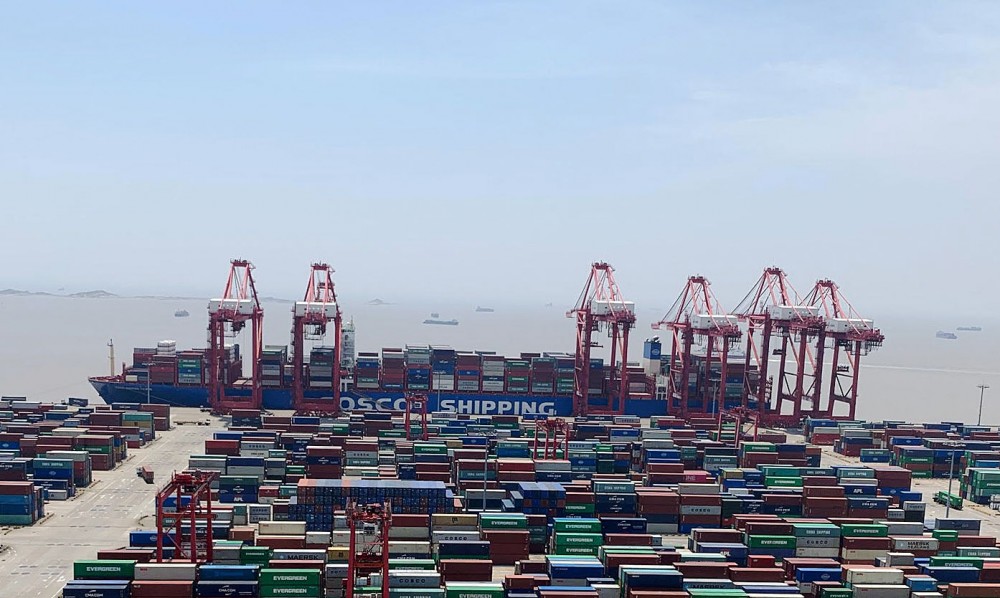 The port of Liinakhamari is the best suited site for a big container terminal on Russia’s Arctic coast, they argue.
Read in Russian | Читать по-русски
By

The deep and ice-free fjord located only few kilometers from the border to Norway and Finland has long been considered a strategically highly important spot in the Russian North.

However, since Soviet times, there has been little activity in the Pechenga Bay, neither by commercial shippers nor by the military. Only aquaculture developers have unfolded activities in the remote and cold waters on the Barents Sea coast.

That silence of the Pechenga waters could soon come to an end. At least if the Pribrezhny company succeeds with its grand development plans in the area.

In this week’s Arktika-2020 conference in Moscow, representatives of the company maintained that a major new port complex will stand ready on site by mid-2024. In the course of 2020, a project memorandum of understanding will be signed and approved along with other necessary project documentation. At the same time, engineering preparations will be started, Project Manager Yevgeny Sychev told PortNews.

The new Liinakhamari Port will include a container terminal with capacity to handle 500,000 TEU per year, aimed primarily on transit goods, as well as facilities for reloading of up to one milion tons of various supply goods, Sychev said.

The Pribrezhny company might seek to take advantage of the free trade zone initiative promoted by regional Governor Andrey Chibis. The initiative is supported by the federal Ministry of the Far East and the Arctic and was discussed at a top level government meeting in Murmansk in late December last year and might cover several parts of the Kola Peninsula.

The new plans for Liinakhamari build on several previous projects. Ever since the early 1990s there has been plans for a major seaport development in the area. Until recently, a group of developers have worked with plans for a 34 million tons capacity seaport on site. Investments would total 113,6 billion rubles and the number of new jobs would amount to 10,000.

Among the proponents of the project has been Mikhail Shmakov, who early last year approached President Vladimir Putin with a request for support.

According to newspaper Kommersant, investors from China, as well as Oman and South Korea, have expressed interest in the project.

The Liinakhamari initiative has however not yet won the support of the president. According to the newspaper, the Russian Security Council and its Secretary Nikolay Patrushev has warned against the project because of its close vicinity to the national border and troublesome security implications.

It is too close to the border, Patrushev says in a comment to the Kremlin.

He also underlines that the project is still only on a concept level and that there has not been made any evaluation of economic aspects and needed investments. Furthermore, none of the major companies operating in the Arctic, like Novatek, Rosneft, Gazprom Neft and Gazprom, have expressed any interest, Patrushev argues.

In addition, the Northern Fleet is actively operating in the Pechenga Bay and adjacent waters, the Security Council secretary underlines.

The lack of interest in the Kremlin has not made Shmakov and his associates give up their plans. We will keep on working with the project, he says to Kommersant.

A project presentation paints a picture of a major facility that «will be able to compete with seaports in the USA, Europe and Southeast Asia.» It will be the only Arctic port that can handle ships with a deadweight up to 300,000 tons, it reads. Included in the plan is the building of a railway that will connect with the nearby line between Nikel and Murmansk.

If the Liinakhamari port is built, it would be a major slap in the face of nearby Norwegian town Kirkenes where similar plans are on the table. The Kirkenes developers eye the building of a new major seaport connected by railway to the Finnish town of Rovaniemi.

The Pechenga Bay is deep and does not freeze in winter. When the area belonged to Finland in the mid-war period, there was hectic activity in the port of Liinakhamari as Finnish industry in the area used the fjord for export of ores from the nearby rich nickel mines.

During the war, Nazi occupiers built large fortification facailities in the fjord and depended on those same terminal facilities in Liinakhamari for nickel shipments to war factories in Germany.

When the Soviet Union annexed the area after WW2, the fjord was used by the Northern Fleet that established a submarine base on site. Later, Liinakhamari housed a fleet of coastguard vessels.