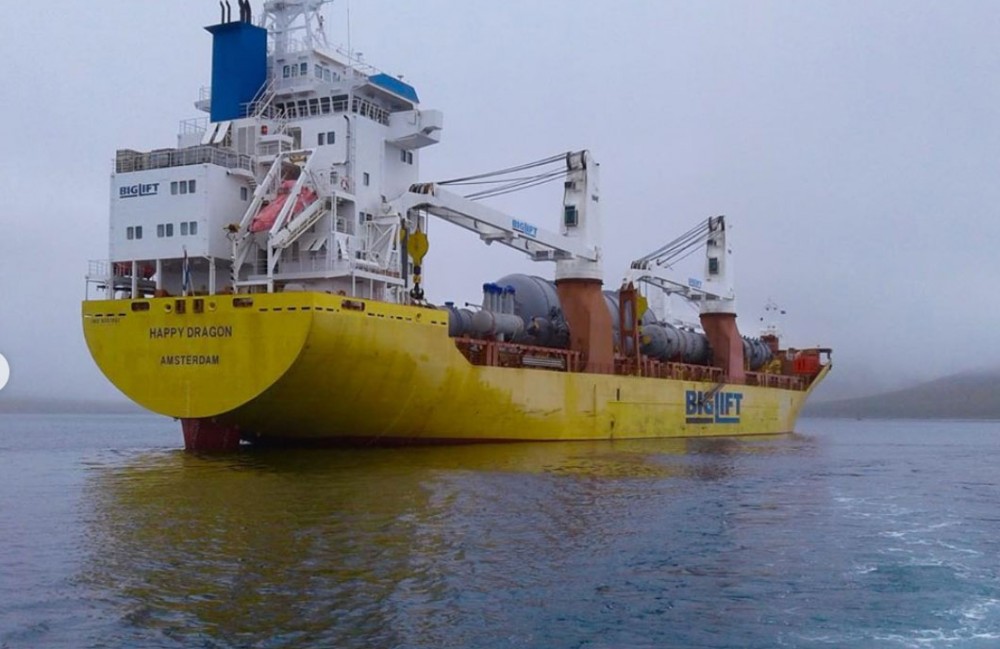 The "Happy Dragon" on its way to Tiksi. Photo: Federal Agency for Maritime and River Transport (Rosmorrechflot)

A heavy loads delivery to the South Siberian region of Irkutsk finds its way from Australia and Japan to Arctic port of Tiksi and 2,500 km up great river Lena.
Read in Russian | Читать по-русски
By

Ship traffic on the great Siberian rivers is extensive, but the shipment that now is on its way to Irkutsk, not far from the border the border to Mongolia, is something out of the ordinary.

In the first part of June, the “Happy Dragon” and “Happy Diamond” set out from Australian Port Hedland and Japanese Kobe respectively and set course for Russian Arctic waters.

After a stopover in Providenya near the Bering Strait, the ships together proceeded into the Chukchi Sea and East Siberian Sea, and on the 14th July arrived in Tiksi, the town located on the coast of the Laptev Sea, information from ship tracker MarineTraffic shows.

On board the two ships from Dutch company Big Lift are 4,500 tons of equipment and big modules for a new polymeric plant in Ust-Kut, Irkutsk region.

The equipment comes from South Korea, the Federal Agency for Maritime and River Transport informs.

In Tiksi, the goods are reloaded onto nine barges that will be towed 2,500 up great river Lena. It is one of the biggest shipments that ever has made its way up the river to Irkutsk, the Maritime and River Transport explains.

Several of the units are more than 500 ton heavy.

Over the last few years, several major shipments have made their ways to Russian Arctic ports and  further up Siberian rivers. In 2016, two 600 ton heavy chemical reactors were sent from South Korea to Sabetta and from there up on the Irtysh to the Pavlodar oil refinery in Kazakhstan.

In summer of 2017, several more shipments were made on the same route. This time, the destination was the south Ural city of Tobolsk and a new refinery built by company Sibur.

In Sabetta, the goods were placed on big barges that subsequently were towed more than 2,000 km up the rivers of Ob and Irtysh.

In 2019, Omsk Governor Aleksandr Burkov announced that his region intends to send major shiploads of grain down the river of Irtysh and to Arctic port of Sabetta, where the goods will be reloaded from barges to cargo ship and sent eastwards along Northern Sea Route to Japan.

The grain shipment scheme has also been supported by Rosatom, the nuclear power company with responsibility for development of the Northern Sea Route.