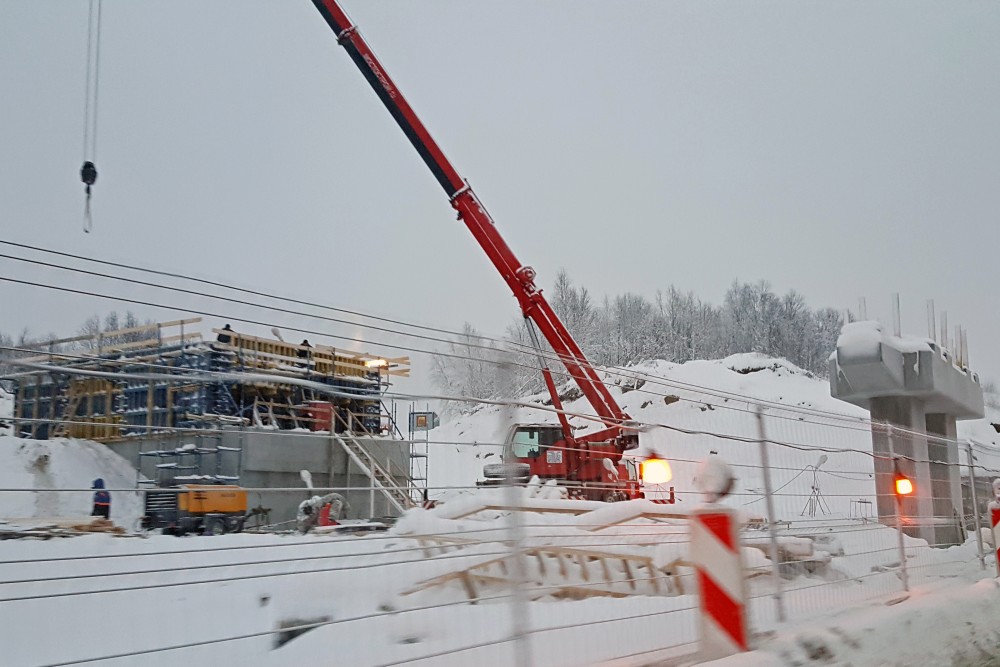 The railway to Lavna port facilities would cross over the E105 highway. Photo: Thomas Nilsen

Work is stopped on the 46 km railway line to Lavna on the west side of the Kola Bay.
Read in Russian | Читать по-русски
By

With the European coal market in sharp decline, Russia’s new giant export harbor for coal, under construction in Lavna outside Murmansk, is already in jeopardy.

Work on the new facilities stopped earlier this fall.

No coal harbor means that the majority of tonnage supposed to be sent by rail to Lavna will not come. Construction of the half-ready railway on the west side of the Kola Bay is now formally halted, newspaper Kommersant reports.

The original plan included shipping of 18 million tons of coal from Lavna annually from 2022.

Murmansk Transport Hub is one of the most promoted infrastructure and business development projects in the Russian north, detailed in almost all Arctic strategy reports and on top of most presentations given by Murmansk officials at domestic and international  conferences for more than a decade.

The contract now terminated between Stroygazconsulting and the Ministry of Transport included a 46 kilometer long railway from Vyhodnoy to Lavna, including a large bridge over the Tuloma River.

According to Kommersant, 26 billion of the 45 billion (€507 million) rubles worth contract is already spent. No official explanation for why the contract is terminated is given, but the Transport Ministry says it is currently preparing tender procedures aimed at further implementation of the project.

If this means Moscow is searching for new private partners to cover part of the costs now as the coal harbor investors are on their way out of Lavna is still unclear.

The terminal-part of the Murmansk Transport Hub project in Lavna was estimated to cost up to 24 billion rubles (€340 million), but how much was actually spent before construction stopped is unknown.