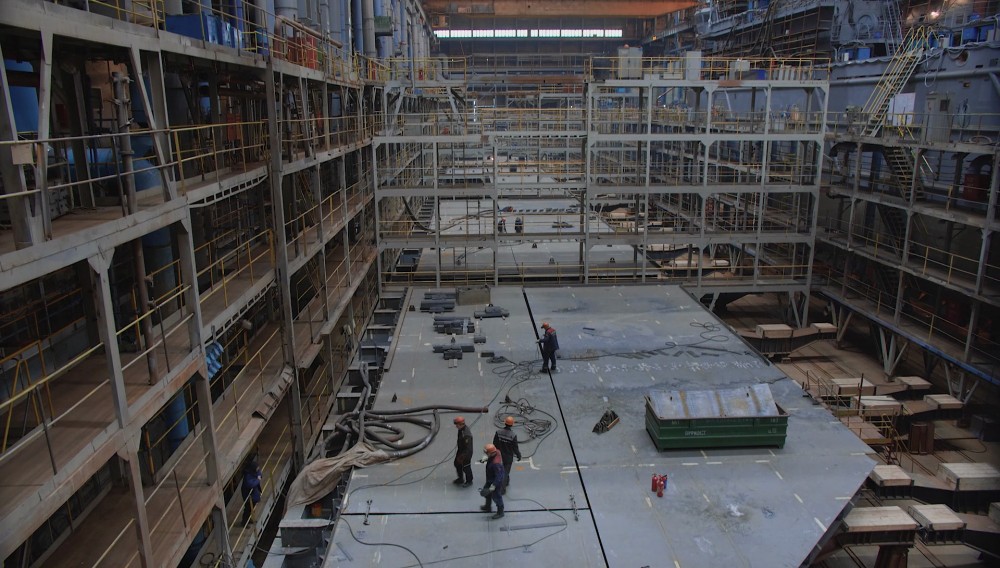 Construction of the superblock for the platform takes place in Severodvinsk. Photo: Zvezdockha

Hundreds of workers at yards in Severodvinsk are engaged day and night with construction of Russia’s second ice-resistant platform for Arctic waters.
Read in Russian | Читать по-русски
By

This is the first year since 2008 Russia sees a drop in petroleum production. The decrease is partly explained by last year’s agreement with OPEC to cut production due to decreased demand in a world seriously hit by the pandemic.

The drop in oil production in 2020 came after two consecutive years of production records in the country’s post-Soviet history.

In December, and this Tuesday, Russia reached a new deal with OPEC to modestly raise oil production, but uncertainties are still high in regards to gas demand in Europe. Especially in the longer run, as the European Union aims at dramatically boosting climate-friendly green energy sources by 2030.

However, the development of new and costly natural gas fields in Russia’s Arctic regions are in full swing. Among them, the Kamennomysskoye-More in the Ob Bay east of the Yamal Peninsula in Siberia.

Zvezdockha shipyard, normally engaged in repairing the Russian navy’s fleet of nuclear-powered submarines, says it will increase the number of workers engaged with the construction, from 240 today to 400 in the nearest future. The employees work on three shifts at the plant in Severodvinsk. Also, the other yard in the city by the White Sea, Sevmash, is engaged with building of the platform. The same goes for mechanical enterprises in Ekaterinburg and Svetly, and the yard in Astrakhan.

The final assembly will take place in Kaliningrad.

While the parts of the platform under construction in Severodvinsk will be towed around Scandinavia to Kaliningrad, other parts from the Astrakhan yard will be towed more than 4,000 km on Russian rivers and the Gulf of Finland to the yard in the enclave by the Baltic Sea.

The Ob Bay is about as challenging as it is possible to be for offshore petroleum activities. Temperatures during mid-winter polar night can be down to minus 60 degrees Celsius. Strong storms, shallow waters, and dense ice make the implementation of the project extreme.

Like the Prirazlomnaya field operated by Gazprom Neft in the eastern part of the Barents Sea, the platform for the Kamennomysskoye-More development will be strengthened with a special ice-resistant superstructure. The Prirazlomnaya platform was ice-strengthened at the same yards in Severodvinsk a decade ago.

Gas production is scheduled to start in 2025.

The massive field development in the remote bay is putting significant industrial pressure on local vulnerable ecosystems. Researchers warn that the massive ongoing dredging conducted to open the waters for bigger ships ultimately could ruin the rare local fish stocks.

The Ob Bay and adjacent peninsulas of Yamal, Gydan and Taymyr are among the areas in the Arctic that is experiencing the most rapid increase in temperatures.

Figures from the Russian meteorological service Roshydromet show that parts of the region in the summer of 2020 were more than 5°C above normal. That follows several years of dramatic warming. According to the climate researchers, average winter temperatures along the Northern Sea Route, the waters located along the country’s Arctic coast, have increased by about 5 degrees since the 1990s. And the warming is most significant in the areas around the Kara Sea, the latest climate report from the institute reads.

Among the consequences is a rapid sea-ice melting that is ultimately leading to easier access for ships and drilling platforms. Oil companies appear ready to rush to the remote region to tap into the vast reserves.