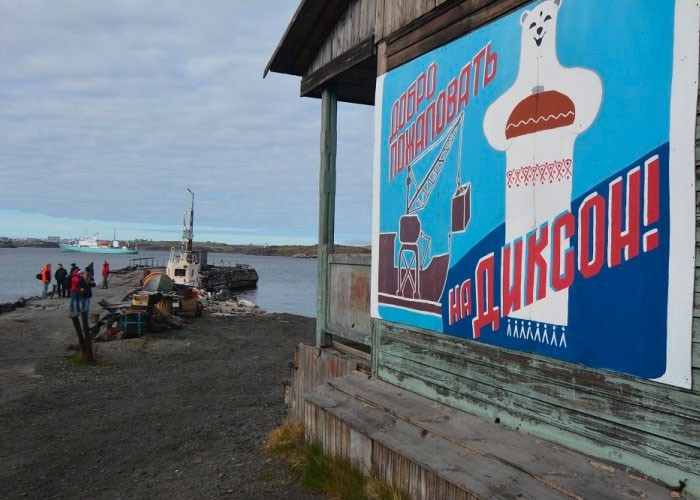 Rosneft's new infrastructure object will be located not far from the town of Dikson. Photo: Thomas Nilsen

State experts approve Rosneft's plans for the Sever Port Bay project. It marks the opening of a new oil province in the Taymyr Peninsula, developers say.
Read in Russian | Читать по-русски
By

The seaport and oil terminal will be located in the Yenisey Bay, south of the town of Dikson. It will a key component in Rosneft’s Vostok Oil project.

The infrastructure object was this week officially approved by Glavgosekspertiza, the state body for expert appraisal of major construction and infrastructure projects.

The projected port waterfront will be 1,276 meter long and have a capacity to handle up to 30 million tons of oil per year. In two subsequent development phases, the terminal’s capacity will be extended to 100 million tons per year.

That capacity is due to be reached by year 2030, Glavgosekspertiza informs.

The new port will be developed in three stages. The first includes the building of a temporary service harbor for unloading of construction materials. Subsequently, the bigger quayage and terminal facilities will be built. The third stage includes the installment  of navigation equipment and safe shipping systems in the djacent waters, the state experts say.

Rosneft’s Sever Port Bay will be built not far from where coal company Severnaya Zvezda is in the process of erecting its new coal port.

Vostok Oil is one of the biggest ever industrial projects in the Russian Arctic. A more than 700 km long pipeline will be built from the Vankor fields in North Siberia to the  new terminal on the Kara Sea coast. The project also includes a big number of new settlements for workers, airports, helipads and a major fleet of new icebreaking tankers.

According to Rosneft leader Igor Sechin, the Vostok Oil has a resource potential of up to 5 billion tons of light-quality oil. Already in 2024, up to 25 million tons are to be extracted. Three years later, in 2027, production will amount to 50 million tons and in 2030 - as much as 115 million.