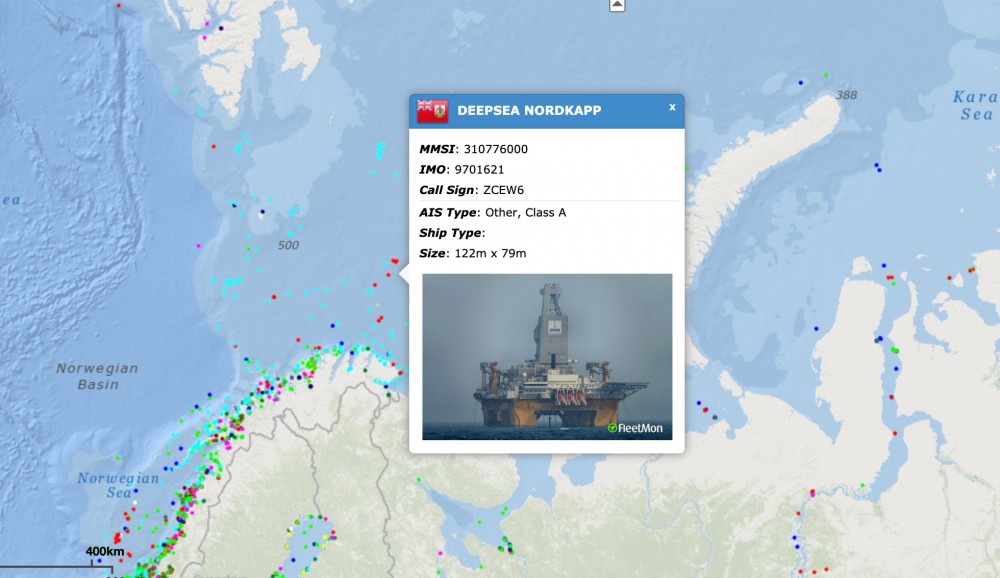 Drilling rig Deepsea Nordkapp on its way towards the Stangnestind area in the Barents Sea.

Warnings from climate experts notwithstanding, oil and gas exploration continues in the Barents Sea. Aker BP now prepares to drill at the Stangnestind just few kilometers from Norway's border to Russia.
Read in Russian | Читать по-русски
By

Semisubmersible rig Deepsea Nordkapp was the last days of May moving towards the drill site located in the easternmost part of the Norwegian shelf. Aker BP has major expectations from Stangnestind, a part of a license obtained in 2016.

The well named after a mountain top on the Varanger Peninsula is located at 72 degrees North, just about ten kilometers from Norway’s maritime border to Russia. In addition to Aker BP, the license consortia includes Russian oil company Lukoil (20%), Equinor (20%) and Petoro (20%).

It is one of Lukoil’s two Norwegian licenses areas.

Drilling at Stangnestind was originally planned to take place in late 2019, but operations were postponed, reportedly because of the COVID-19.

According to the Norwegian Petroleum Directorate, the Deepsea Nordkapp will drill two wells in the area. The rig comes directly from a license area operated by Equinor further west in the Barents Sea.

The Stangnestind is located in the waters that in 2010 were delineated in a landmark deal between Norway and Russia. Norwegian seismic vessels in 2011 moved into the area and preliminary survey results indicated significant hydrocarbon reserves. However, subsequent well drilling gave little success and in 2019 national energy company Equinor announced that it was giving up the waters located along the border to Russia.

The well drilling in the far northern Barents Sea comes amid growing criticism from environmentalists, climate researchers, as well as energy experts.

A new report from the International Energy Agency (IEA) warns that there can be no new oil and gas projects if global warming is to be kept below 1,5 °C. The energy experts clearly say that a complete transformation of energy production, transportation and consumption must be made and and that planning of new hydrocarbon projects must be halted.

The report has gotten lukewarm reception from the Norwegian government, which insists that its oil and gas policy will remain unchanged.

The country’s 25th License Round was announced in June 2020 and includes as many as 136 proposed blocks, of them 125 in far northern waters.

In a recent interview with newspaper Klassekampen, Equinor Chief Economist Eirik Wærness made crystal clear that his company intends to produce oil for several more decades and that plans for new projects will not be revised.

Environmentalists underline that the expansive oil policy is incompatible with Norway’s climate commitments. In a statement on the Stangnestind drilling, Greenpeace stresses that Norway must make significant cuts in its oil and gas production and that new projects must be cancelled.

Also the Norwegian Polar Institute is skeptical towards the drilling at Stangnestind. The institute says it is concerned about possible consequences from a acute blowout and subsequent oil spill that would drift towards Russian waters.

The waters between the Bear Island and the southeastern parts of the Barents Sea are crucial for seabird populations. The region is also important for marine mammals that would suffer from an oil spill, the Polar Institute underlines.