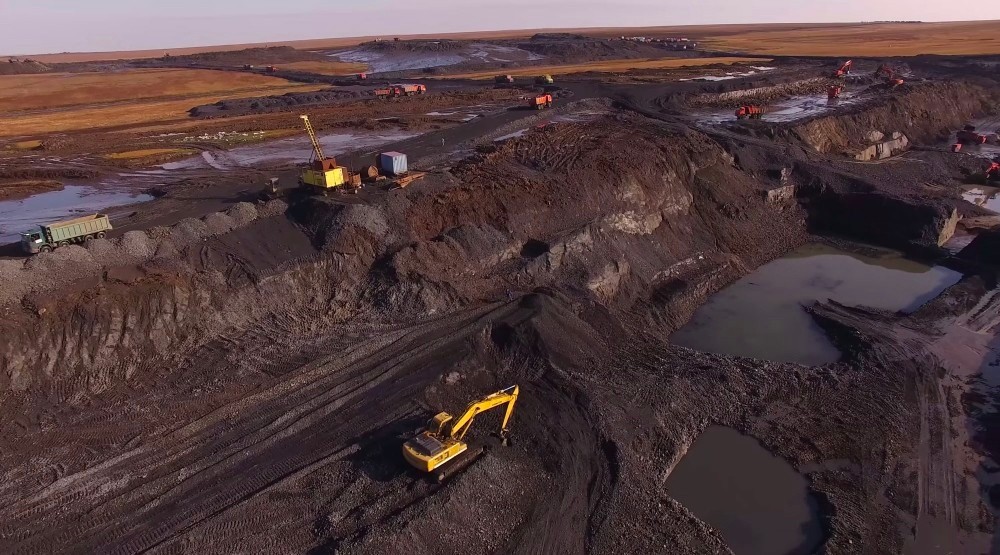 Hundreds of ships loaded with construction materials shuttle to the sites of new nonrenewable energy projects.
Read in Russian | Читать по-русски
By

Over the past year, ships have crowded along the coast of the Gydan Peninsula where natural gas company Novatek is developing its new Arctic LNG 2 project. Massive volumes of construction goods are needed for the building of the port terminal that ultimately will handle almost 20 million tons of liquified natural gas per year.

The shipments to the area culminated after sea-ice in the shallow bay melted this July, and up to 50 ships have lately simultaneously amassed in the waters near the Utrenny port terminal.

On the 16th of August, a total of 45 ships were located in the waters near the new seaport. In addition, another about 100 vessels were located in other parts of the Ob Bay, most of them near the Sabetta port, the Novy Port oil terminal, and the drill site of jackup rig Perro Negro 8.

There are also several dredgers in the area engaged in the deepening of local ship lanes.

The Gulf of Ob and the adjacent peninsulas of Yamal and Gydan is a top priority region of Russia’s oil and gas industry. Environmentalists fear its vulnerable Arctic environment could experience irreversible damage as natural resource extractors expand into the area.

The Gulf of Ob is not the only place for an unprecedented industrial Arctic development. A bit further east, in the Taymyr Peninsula, both oilmen and coal miners are busy with the development of terminal facilities for new major projects.

Six vessels were in mid-August moored near the site where coal mining company North Star (Severnaya Zvezda) is building its Yenisey seaport. The new terminal that formerly was named Chaika will serve the Syradasaysky coal field, and is due to be ready for operations in 2023.

According to the Ministry of the Far East and Arctic, the 56 km long road that connects the terminal with the project processing plant is now about to be completed. The plant will have a production capacity of 7 million tons per year. The North Star is owned by business tycoon Roman Trotsenko and his AEON.

About 50 km south of the Chaika terminal is coming another major piece of infrastructure. Oil company Rosneft is building its Sever sea terminal that will serve the Vostok Oil project. In mid-August, at least three ships were moored on the site. It is built to be able to handle as much as 30 million tons of oil already by 2024. Only few years later, the terminal will be able to handle 100 million tons per year, company CEO Igor Sechin has informed.

Rosneft now confirms that it has started construction of key infrastructure objects for the Vostok Oil. The company in the first half of 2021 boosted its investments by 27 percent to 428 billion rubles (€4.95 billion), of which about 25 percent is reported to be spent on the Arctic oil project, according to a company report.

The report is commented on also by newspaper Kommersant.

The new fossil fuel projects unfolding in the Russian North are all part of the country’s development plans for the Arctic and Northern Sea Route.