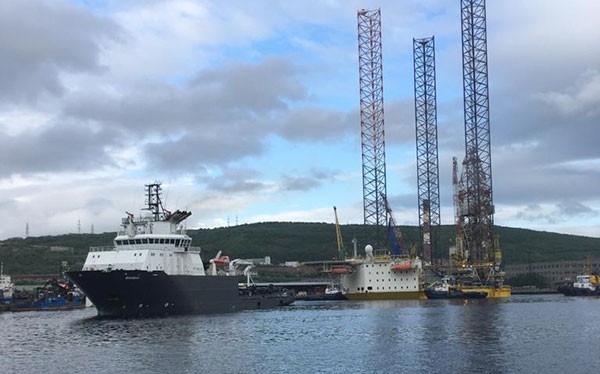 The Perro Negro 8 is exploring the shallow and far northern waters. Several wells will this year be drilled on the Russian Arctic shelf.
Read in Russian | Читать по-русски
By

The rig owned by Italian oil service company Saipem had been transported several thousand kilometres before it in late July reached the drill site located south of Sabetta in the Gulf of Ob.

The installation had operated in the Arab Gulf before was sent to Murmansk and subsequently further east to the shallow Ob. It was the Norwegian heavy loads carrier Falcon that brought the rig from Dubai to Murmansk.

The Perro Negro 8 is believed to drill at the Geofyzichesky, a license area operated by Novatek.

The rig is a self-elevating triangular mobile drilling unit with independent legs to operate up to 350 feet water depth capable of drilling up to 30,000 feet, Saipem informs. Two support vessels are now accompanying the rig, ship tracking data show.

The drilling takes place in a highly vulnerable Arctic environment. Researchers have warned that the ongoing extensive exploration of the Gulf of Ob, including comprehensive dredging, is putting the local ecosystem under major pressure.

The Perro Negro 8 is not the only rig now drilling Arctic wells. The Arkticheskaya is currently operating at the Skuratov field north of the Yamal Peninsula, Gazprom Flot informs. The rig that is owned and operated by the Gazprom subsidiary company is surrounded by four support vessel, among them two from Norway.

Also semisubmersible rig Severnoye Siyanie is on its way to the Russian Arctic. The rig that is operated by Gazprom Flot in late May set out from the Port of Vostochny on Russia’s Pacific coast and is due to arrive in the Kola Peninsula on the 8th of August. It is carried by heavy loads ship GPO Amethyst.

The Severnoye Siyanie might ultimately drill in the Kara Sea at sites recently explored by drillship Bavenit. For about a month, the advanced vessel earlier this year drilled a total of five wells at Gazprom’s license areas in the Barents Sea and Kara Sea. The wells were made as preparatory measures for subsequent more comprehensive exploration by a drilling rig, company Gazprom Nedra informs.

It is the first time that this kind of approach has been applied in Russia, the company says.

Mounting climate concerns and the increasingly unpredictable future of the oil and gas markets notwithstanding, Russian companies have no plans to reduce exploration of Arctic hydrocarbon resources.

According to Vsevolod Cherepanov, General Director of Gazprom Nedra, the development of the continental shelf is a task of great state importance. In a recent conference, the company leader explained that Gazprom Nedra, the subsidiary unit of Gazprom responsible for shelf exploration, now introduces a more efficient approach to Arctic well drilling. From now on, rigs will applied for drill operations across several parts of the Arctic during summer. In the period April-June, the rigs will drill in the Barents Sea, and in July-October in the more icy and less accessible Kara Sea.

Cherepanov also explains that his company’s drilling program for the period 2021-2023 will be based on a so-called cluster approach. As part of the development of Cluster 1, the fields of Leningradskoye, Rusanovskoye, as well as the Dinkov field, will be developed.  These fields are located near the land-based fields of Bovanekovo, Kharasavey and Kruzenshternskoye, which allows the company to harmonise infrastructure development, he says in an interview.

The last two clusters are located in the Barents Sea, Cherepanov explains. The Cluster 4 includes the Shtokman field and surrounding satellites, while the Cluster 5 includes the Fersmanovsky, Demidovsky and Medvezhy areas, he says to Gazprom Nedra’s corporate newspaper.