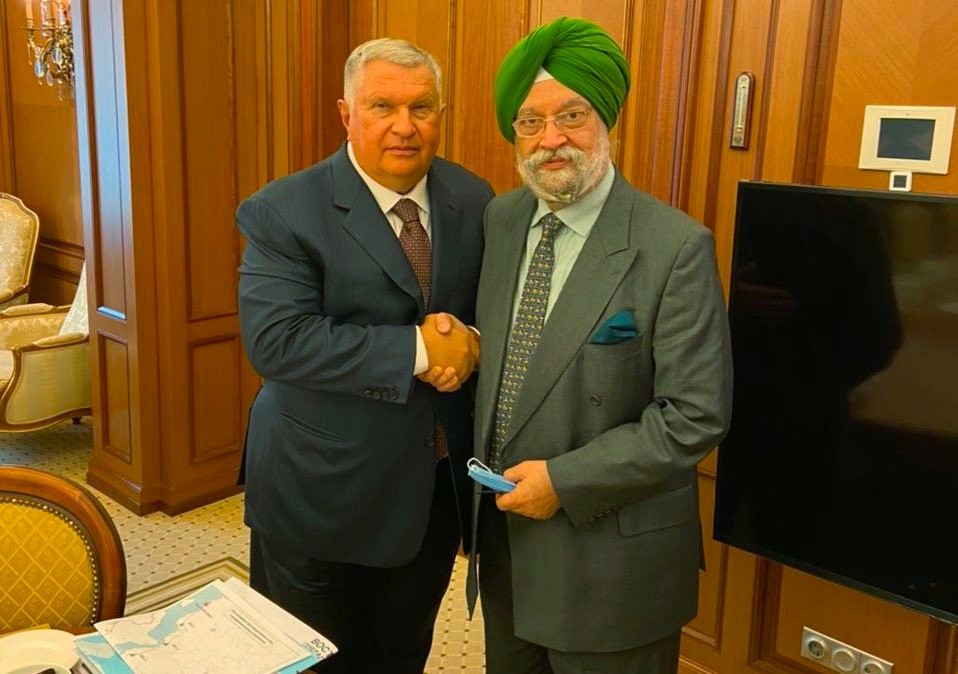 The huge Vostok Oil project was key issue of discussion when Indian Minister of Petroleum and Natural gas Shri Hardeep S Puri sat down for talks with Rosneft's Igor Sechin.
Read in Russian | Читать по-русски
By

The Indian top official this week arrived in Vladivostok to take part in the Eastern Economic Forum. On his way to the far eastern city, he made a stop-over in Moscow to meet with Russia’s most powerful oilman Igor Sechin.

The photo distributed from the meeting shows the two men in front of maps from the far northern Yenisey Bay and the Vostok Oil project plan.

“We held very productive discussions on further strengthening our strategic partnership with Russia in the energy sector,” Minister Puri says in a comment shared on Twitter.

The two men reportedly discussed the development of joint oil projects, both upstream and downstream.

According to the oil company leader, the Vostok Oil is one of the most prospective oil production projects in the world. It includes 52 license areas with a resource base of more than 6 billion tons of oil.

“By 2033, extraction is projected to reach a level of 115 million tons, and a logistical advantage of the Vostok Oil is the possibility to simultaneously supply resources from the fields in two directions, both to the European and Asian markets,” Sechin told his Indian guest.

The Rosneft leader also reminded Puri that India from before is partner in Vankor, the north Siberian field that is part of the project plans.

Indian investors have long been linked with the huge new oil project in the Russian Arctic.

After a meeting with Russia’s Minister of Foreign Affairs Sergei Lavrov in early 2020, former Indian energy minister Dharmendra Pradhan made clear that India will take part in the project.

«Yes, without doubt,» Pradhan said when asked by journalists about his country’s possible participation in Vostok Oil

Rosneft has subsequently actively sought to include Indian investors in the project.

According to Indian newspaper Business Standard, there are ongoing talks between the countries on joint projects, including in the Arctic.

“This will be for exploring and producing oil and gas in Russia. While the project and scope has not been finalised, talks have begun and the Russian government has offered some fields,” a senior oil ministry official aware of discussions told the newspaper. “This fresh investment will be for at least $ 2-3 billion,” the official added.

Vostok Oil was high on the agenda also during the top meeting between Vladimir Putin and Indian Prime Minister Narendra Modi in 2019.

Following his meeting with Igor Sechin, Shri Hardeep S Puri on Thursday proceeded to Vladivostok to participate in the Eastern Economic Forum. In his presentation delivered in a round table on Russian-Indian relations, the minister did not comment on his country’s possible participation in the Vostok Oil, but he underlined that he is “very optimistic” about perspectives for joint projects.

The Vostok Oil is developed in the far northern Taymyr Peninsula where vast areas of vulnerable Arctic lands will be affected as the oilmen build hundreds of kilometres of pipelines, roads and other infrastructure along the Yenisey River to a projected terminal on the Kara Sea coast.