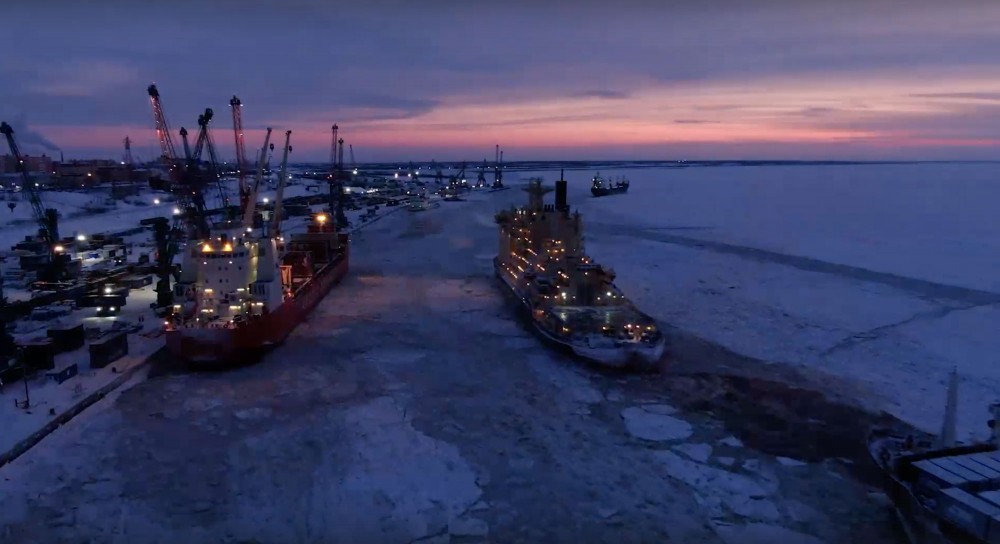 Despite polar dark and freezing cold, Rosneft sends thousands of tons of construction materials to its Vostok Oil project in the far northern Taymyr Peninsula.
Read in Russian | Читать по-русски
By

Two cargo ships in late December broke their way through the ice of great river Yenisey towards the port town of Dudinka. On board the Turukhan and Tersky Bereg was more than 7,000 tons of cargo including 4,000 tons of pipes.

They are the the first shipments of the kind to Rosneft’s major Arctic project, the Vostok Oil.

“This marks the start of Vostok Oil. It is the beginning of a big job,” says Karen Pashinyan, General Director of TaymyrBurServis, an affiliate company of Rosneft.The two ships will soon be followed by many more. More than 50,000 tons of project goods will be shipped to Dudinka in the course of this winter, the local port administration informs. Most of the ships will sail from Arkhangelsk, through the Kara Sea and up the Yenisey.

The Dudinka port and terminal facilities are owned by Nornickel and normally applied for shipments of nickel products. A major part of the port’s storage capacity will now be occupied by Rosneft.

From the Dudinka, the pipes will be transported by trucks on winter roads to field installation sites across the region. A 252 km long winter road has already been built to the field of Suzunsky and another almost 1,300 km to other sites, the company informs.

The Vostok Oil includes the building of 770 km of trunklines and another 7,000 km of branch pipelines. A total of 13 gas and oil fields are part of the project that ultimately will produce an annual of 100 million tons by 2030.

The trunklines will connect the Vankor, Suzun, Tagul, Lodochnoye and Payakha fields with an oil terminal by the Yenisey Bay.

Rosneft is under major time pressure to launch the project. Igor Sechin has underlined that the project already in 2024 will produce at least 30 million tons, and as much as 100 million tons six years later.

Construction has been going on for several months at the site that ultimately will serve as project oil terminal. In late May 2021, two ships set ashore about 20,000 tons of constriction materials on the ice of the Yenisey Bay. Since then, big works have been undertaken on site.

In course of summer of 2021, a total of 15 ships reportedly delivered 145,000 tons of construction materials to the remote coast. By late November, about 220 workers and 100 pieces of machinery were busy with the building of a 1,300 meter long terminal mooring site and working village.

The Sever Bay terminal will be one of the biggest of its kind in the whole Arctic.

The Vostok Oil is built across the Taymyr tundra, a vast and environmentally vulnerable Arctic territory. The project installations will have major consequences for environment in the region and spills and accidents could have long-lasting and devastating effects.

The lion’s share of the produced oil be exported from the Sever Bay terminal and lead to a boost in shipments on the Northern Sea Route.