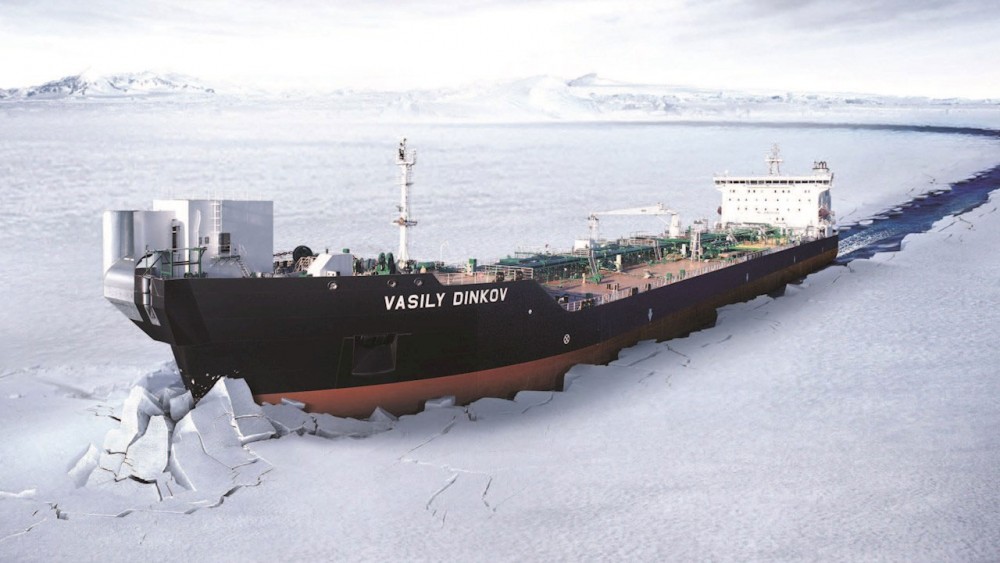 Tanker "Vasily Dinkov" has sailed from Murmansk to the Chinese port of Rizhao with a shipment of oil. Illustration photo: ABB

The tanker that normally shuttles between Lukoil’s far northern oil terminal of Varandey and Murmansk this week sailed into the Yellow Sea and made port call in the town of Rizhao.

It has been an exhausting voyage of more than 11,000 km and almost 1,5 months at sea. According to shipping data, the tanker set out from Murmansk on the 5th of October. It is due to moor in the port of Rizhao on the 18th of November.

The ship that is owned and operated by Russian shipping company Sovcomflot has top ice-class Arc6 and is designed for sailing under rough Arctic conditions.

But it is likely to be first time that the tanker makes this kind of shipments.

The voyage of the Vasily Dinkov comes only few days before the EU introduces its oil ban on Russia. According to the Commission’s 6th package of sanctions, adopted in June this year,  all purchase, import or transfer of crude oil and certain petroleum products from Russia to the EU will be prohibited from 5th of December 2022.

The embargo creates serious troubles for the Russian oil industry that has the EU as its most important market. Consequences will be dire also in the Russian Arctic where companies like Lukoil, Gazprom Neft and Rosneft all have big fields and important export infrastructure.

According to Russia’s third biggest oil company Gazprom Neft, Arctic fields now account for more than 30 percent of its total production. In 2020, production at the company’s Novy Port project increased five percent to a total of 14,89 million tons, and the offshore project Prirazlomnoye delivered 3,27 million tons, an increase of three percent year-on-year. In addition comes oil from Lukoil’s Varandey terminal, expected to reach more than 6 million tons in 2022.

With the upcoming ban, Russian oil risk getting stuck in the domestic market. Alternatively, new markets will have to be opened.

According to Russia’s Deputy Prime Minister Aleksandr Novak, a larger share of Russia’s hydrocarbons must now be exported to Asian countries, and he argues that the Northern Sea Route will be crucial for logistics.

“With the new and unprecedented pressure on Russian economy from Western countries, the significance of the Northern Sea Route as a marine transport artery […] is manyfold increased,” Novak said in a government meeting in October.

“Our task is to develop this artery in a systematic manner,” the high-ranking official underlined.

However, the high ambitions notwithstanding, the Arctic trade route is covered by thick ice for several months every year and shipping is only possible with escort of powerful icebreakers.

In November 2021, more than 20 ships got stuck in the remote area following a quick and early freeze of the waters. And this year looks no better. Ice maps show that large parts of the Laptev Sea and East Siberian Sea already in early November were covered by thick multi-year layers of sea-ice.