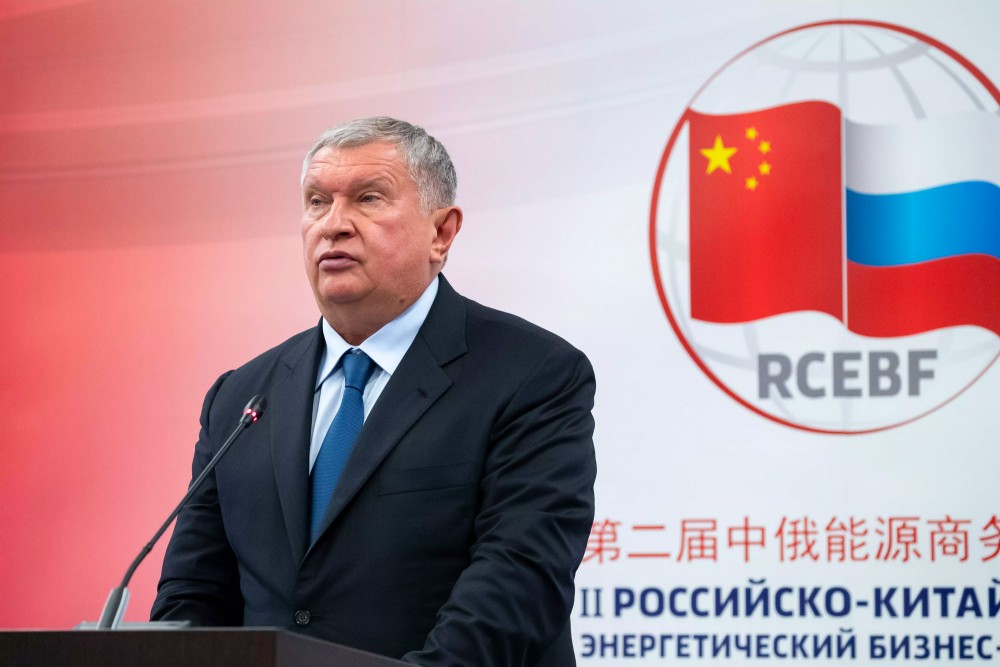 Ahead of new crippling sanctions against the Russian energy sector, Rosneft leader Igor Sechin pays homage to the Chinese President and welcomes Beijing to invest in the Northern Sea Route and Arctic project Vostok Oil.
Read in Russian | Читать по-русски
By

Russia desperately seeks to respond to the international sanctions imposed on its energy sector and increasingly looks to China for salvage.

In his speech, Sechin repeatedly quoted the Xi Jinping, including his address at the UN in 2015 about a desired “community for a united fate of mankind.”

According to Sechin, China stands at the helm of an anti-western world order.

“It appears that the Chinese People’s Republic works for the unification of mankind, while the West seeks its division,” Sechin said. He added that the state leaders of Russia and China have “concurring views on processes ongoing in the world.”

It was the speech of a great admirer of China’s power and success. And it was the address of an increasingly desperate Russian top leader in dire need of support from a strong ally.

Igor Sechin’s address at the China-Russia Energy Business Forum comes as Russia has crushing defeats on the battlefields in Ukraine and as an unprecedented international sanctions regime is hitting its economy, threatening with with decay and chaos.

The Business Forum was held only two days prior to the European Union’s introduction of an embargo on Russian oil.

From 1st of December, the EU introduces a complete import ban on all Russian seaborne crude oil and petroleum products. It will cover 90 percent of the EU’s current oil imports from Russia and is expected to have crippling effects on Rosneft and the rest of the country’s oil industry.

The EU is also working on the introduction of a price cap on Russian oil.

According to Igor Sechin, Russia and China must stand together against the west, and he promotes the Arctic as a region of enhanced cooperation.

“The cooperation between Russia and China in the Arctic is developing dynamically [and] we welcome the inclusion of Chinese partners in projects in the Russian Arctic, among them on the joint development of the Northern Sea Route and supporting coastal infrastructure,” he underlined.

Indirectly, he also called on China to invest in the Vostok Oil project.

Chinese companies are today partner in Novatek’s Yamal LNG and Arctic LNG 2 projects. Shipping companies from the country have over the past years sent several ships across the Northern Sea Route. However, in 2022 no Chinese vessels have sailed on the route.

According to Sechin, the Vostok Oil is one of the biggest investment projects in the world. It will provide long-term reliable and guaranteed deliveries of energy for the growing economies of Asian countries, he argued.

Furthermore, the project “will reduce price volatility, and prevent sharp price fluctuation something that hampers market stability,” he said.

Rosneft intends to produce a staggering 115 million tons of oil in Vostok Oil by year 2033. Already in 2024, the production volume is to reach at least 25 million tons.

Igor Sechin is one of Vladimir Putin’s closest associates and by observers called Russia’s ‘grey cardinal.’ Under Sechin’s leadership, state company Rosneft has developed into the biggest and most powerful energy company in Russia and a key instrument in both domestic and foreign policy.

The speech delivered in Moscow this week conveyed a message not only from oil company Rosneft, but also from the Kremlin. In addition to being CEO of Rosneft, Igor Sechin also chairs the Presidential Commission on issues of strategic development of the the energy complex.

The China-Russia Energy Business Forum was established by Putin and Xi Jinping in 2018 and has since been organised on annual basis by companies Rosneft and CNPC.