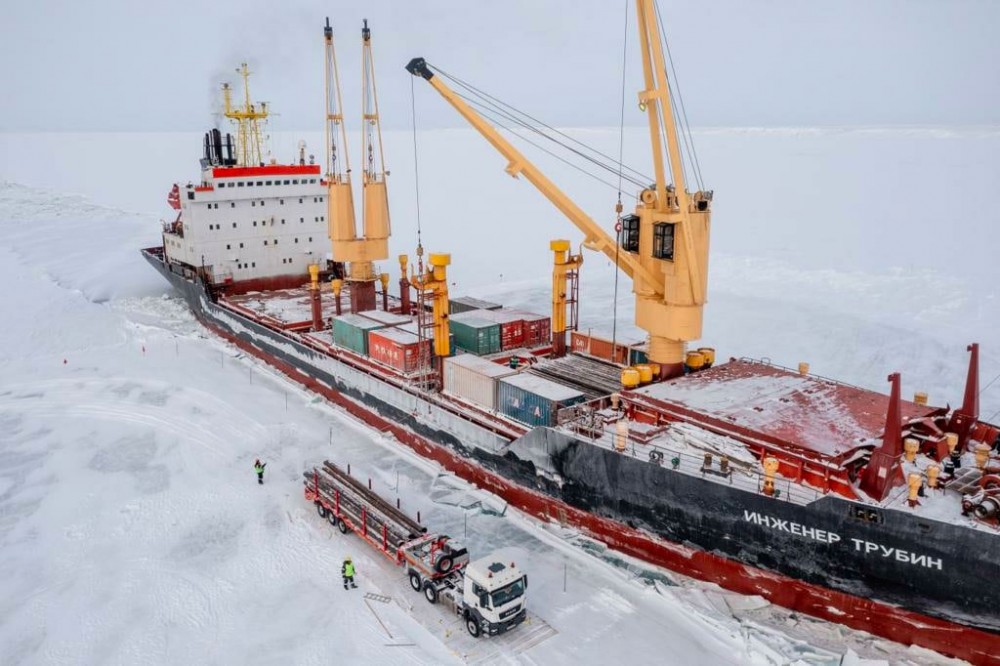 A big number of shipments to the Vostok Oil project will be unloaded directly on the Yenisey river ice. Photo: RN Vankor

The state oil company run by Putin mate Igor Sechin is making an unprecedented industrial expansion into the vulnerable tundra of the Russian far north.

And Sechin is in a hurry. The Vostok Oil project is scheduled to produce more than 100 million tons of oil by year 2030, all of it to be shipped out through the Northern Sea Route to buyers in Europe and Asia.

Already in 2024, the project is due to produce at least 30 million tons.

In the course of winter of 2023, more than 500,000 tons of construction materials are to be transported to the construction sites in peninsula Taymyr. Much of it will be shipped to the port of Dudinka and the new Sever Bay terminal, as well as to industrial bases of Tocsin, Karaul, Vorontsevo and Nanlau, the company informs.

In addition, the company is in the process of preparing as many as 16 terminal mooring points along the northern parts of the Yenisey. The mooring points will allow ships to moor and unload goods directly in the river ice.

According to Rosneft, the Vostok Oil is the biggest industrial project currently under development in Russia. The need for deliveries of construction materials is massive, and the company is grappling also with getting needed shipping capacities.

Rosneft has already contracted the brand new nuclear-powered icebreaker Ural. In addition, it plans to apply services from another four icebreakers, as well as eight ice-class cargo ships.

Metal and pipeline components are to be delivered in the course of winter 2023. In addition comes concrete modules, technical equipment, cables and communications, isolation valves, vehicles and more.

Much of it will be shipped from Murmansk and Arkhangelsk. Shipments will be made also from Krasnoyarsk, Tobolsk, Yamburg, Labytnangi and Gaz-Sale on the Yenisey, as well as the rivers Ob and Irtysh.

The Vostok Oil will make the far northern Taymyr one of Russia’s most important oil regions. A big number of tankers will ultimately shuttle to the Sever Bay terminal on the coast of the Kara Sea. By year 2027, the terminal is due to handle 50 million tons of oil per year. Few years later the annual volumes are to be increased to more than 100 million tons.

The Vostok Oil includes more than 50 license areas in the Taymyr Peninsula, and the first of them to be developed are the Payakhskoye and Icheminskoye fields. Both of them are due to come into production in 2024.

The latter field is located along the western banks of river Yenisey and a 7 km long pipeline will be built under the river to infrastructure on the eastern side.

The development of Vostok Oil comes at at time when Russian hydrocarbons are under mounting pressure in the international market. Sanctions introduced following Russia’s onslaught on Ukraine will ultimately lead to an embargo in the European market.

However, Rosneft argues that it will be able to develop the Vostok Oil without western technology. According to Vladimir Chernov, the Vostok Oil General Director, as much as 98 percent of all the project’s materials and equipment will be produced domestically in Russia.