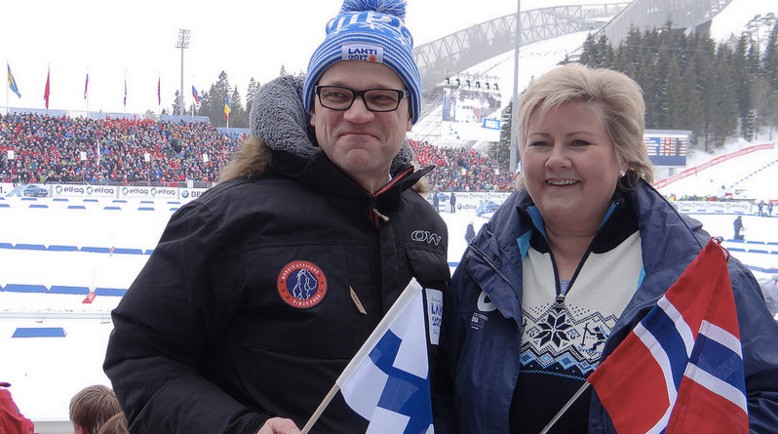 Finnish PM Juha Sipilä would like to team up with Erna Solberg from neigboring Norway in construction of a new railway link to the Arctic Ocean. Photo: Anne Sjöholm, Finnish Government at Flickr

Prime Minister Juha Sipilä would like to connect northern Finland with the Arctic Ocean, but is confronted by an outcry from indigenous communities.
Read in Russian | Читать по-русски
By

In a recent interview with Yle Radio, the Finnish premier highlighted his interest in the development of a railway line from northern Finland to the Arctic coast of Norway. He also indicated that the infrastructure connection could become a priority issue for the country’s upcoming chairmanship in the Arctic Council.

That is not well perceived by the Sami Parliament of Finland.

According to Tiina Sanila-Alkio, President of the Parliament, cooperatives of reindeer herdsmen will do what they can to put a stop to project.

Sanila-Alkio claims that the government’s drive for railway plans lies behind its recent new bill on national forest governance. In that draft law, the Sámi people is deprived its right to veto in regional land use cases.

UN human rights advocates now call on the Finnish government to continue negotiations with the Sami representatives. A compromise which includes the necessary protection mechanisms for the Sami people must be found, representatives of the UN says to Yle.

«Now is the time for the Sami people to wake up», she says to Yle. «We can not accept that the Sami culture is weakened on all levels, we must be prepared to work hard [against it] and I think the Sami people is ready for that», she adds.

Finland is taking over the chair of the Arctic Council from the USA in 2017.

The Finnish Government has long showed growing interest in the Arctic railway connection. One of the alternative route for the line is between Rovaniemi, the regional capital, to the Norwegian town of Kirkenes on the Barents Sea coast.

As previously reported, Olle Rehn, former EU commissioner and now Finnish Minister of Economics, last fall underlined that  «we want a railway connection between Berlin and the Arctic Ocean».