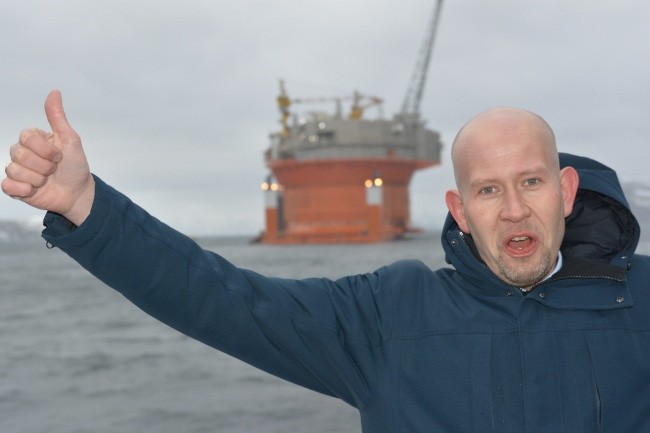 Norway's Minister of Petroleum and Energy Tord Lien will on Wednesday 18th May announce the winners of the new Arctic licenses. Photo: Thomas Nilsen

The country’s minister of oil and energy is ready to present the winners of 57 new Arctic blocks.
By

Norway takes a big leap into expanded Arctic petroleum as it is preparing to announce the 23rd License Round awards. The new licenses will bring the oil industry further north and further east than ever before on the Norwegian shelf.

Minister Tord Lien on the government website informs that the awards will be announced in Hammerfest, the Norwegian Arctic town, on Wednesday the 18th May.

On the table are 54 licenses in the Barents Sea and three in the Norwegian Sea. Among the blocks on offer are eight located immediately along the borderline with Russia and another eight blocks located to the north of the 74th parallel.

The new license round is stirring hefty controversy among environmental groups.

Truls Gulowsen from Greenpeace Norway in a tweet points at the major paradox in Norwegian energy policy; while Prime Minister Erna Solberg talks climate change and the Arctic in the White House, the minister of energy announced the new ambitious license round.

A new report from law processors Beate Sjåfjell and Anita Halvorssen concludes that Arctic drilling is against the Norwegian constitution and that a counter-drilling case in the country’s Supreme Court has a good chance for a win.

Activists in Nature and Youth say the are ready to sue the Norwegian state if it proceeds with the 23rd License Round.

A total of 26 companies are bidding for the new licenses. That is significantly less in the 22nd License Round, but still a high number considering the current crisis in the sector.

They all won license stakes also in the 22nd round. However, for the Russian companies, and especially Rosneft and Lukoil, it is the 23rd Round which really is of interest. By getting stakes in these blocks, they will potentially be able to operate on both sides of the maritime Norwegian-Russian border. Resources in the area are believed to be considerable and several major structures might stretch across the border.

Lukoil has made clear that it is aiming at the licenses located along the border. In an interview with television channel Rossiya-24 in 2012, leader of Lukoil Overseas Andrei Kuzaev underlined that his company will be ready to invest up to $300 million in case the company wins tenders on the Norwegian shelf.

The company, a branch of Russia’s second biggest oil producer, is very open about its plans in Norway.

“Our goal is the grey zone, […] these are the territories we are preparing for”, he underlined. The tenders, which will take place this year, are “only the beginning”, he added.

The following companies bid for the licenses: