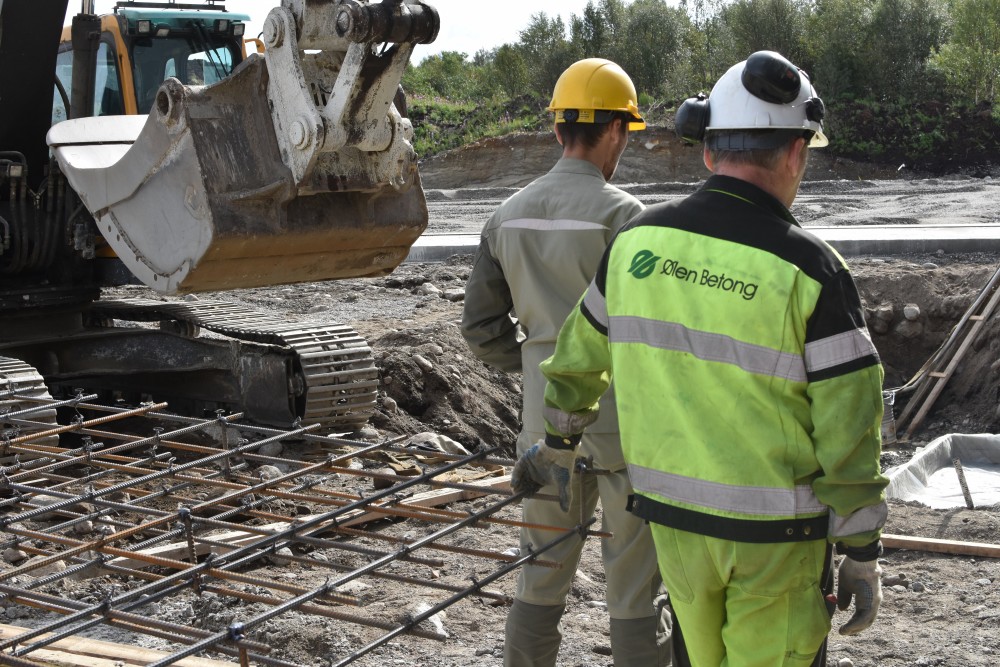 Ølen Betong is expanding one of its production halls in Murmansk. Photo: Thomas Nilsen

Russia’s Arctic development needs concrete, lots of concrete. In Murmansk, the Norwegian producer does its best to meet demand, despite having a director declared persona no grata.
Read in Russian | Читать по-русски
By

Soon, the final of more than 4.000 Pile Caps produced at Norwegian-owned Ølen Betong will be shipped from the port of Murmansk towards the Yamal LNG.

When the Barents Observer visits the plant outskirts of Murmansk in the Russian north, production is lower than it was during peak-hours for the Yamal LNG contract. Concrete mixer transport trucks are driving in an out of the gate with deliveries to regional building projects in the Murmansk area. The plant is clean and tidy, not what one would expect a concrete production facility to look like.

Shining in the warm August sun, there is however a tense atmosphere at the plant. Last month, the founder and director of Ølen Betong’s first-ever Russian branch was stopped by FSB at the border and denied entry. After living for years in Murmansk, establishing the business, Atle Berge is now a person non grata in Russia for the next ten years.

“It was a big surprise that Atle was denied access. Some kind of big mistake. We still don’t know why,” says Alexei Koudrenko. Without Atle Berge in business on-site, Koudrenko is acting operation production leader of the plant.

He says many speculations and rumours are buzzing around.

“Yes, we got a big contract with the Yamal LNG. But that one is nearly finished now. If someone wanted to stop us from the project they should have done it long time ago,” Alexei Koudrenko elaborates.

Missile through the office wall

“Then there are rumours that someone would like to take over the company, but I don’t know who would like that. A concrete company?”

Behind Alexei, at the plant’s office, a framed picture hides a hole in the wall. Three years ago, a projectile fired from outside, made the hole. Doing business in Russia is somewhat different from home in Norway.

“I don’t think Atle is a spy, he has spent a lot of time to build all this and he is very important for the company.”

With weights of up to 55 tons each, the 4,000 Pile Caps for Yamal LNG were worth a few hundred million Norwegian kroner. Ølen Betong now says they are preparing for new contracts.

Before being expelled from Russia, Atle Berge said to the company’s own portal  that the hope is to deliver concrete piles to more major projects in the region.

“There is a lot going on now. We hope to deliver to a bridge and larger buildings under planning. It can give us a lot of work over the coming years,” Berge said.

Ølen Betong invests for the future. A new production hall was recently opened and expansion is already underway.

Novatek, the private Russian gas company currently building the mega-LNG plant at Yamal Peninsula in the Arctic is also eyeing a major investment outside Murmansk. A yard is to be built at Belokamenka on the western shores of the Kola bay. As previously reported by the Barents Observer, investments could reach some 25 billion rubles. (€340 million).

“We are preparing to do a test program for the Belokamenka project with production of Russian light-weight aggregates.”

A test-laboratory facility is already in place next to concrete batching plant.

“The test-program will be done in cooperation with Novatek,” Koudrenko explains and hints that the Belokamenka project could be as big as Ølen Betong’s deliveries to the Yamal LNG.

“This is the new reality

“There are a lot of potential projects in the Russian Arctic. But it all depends on future petroleum prices. And then we have the sanctions – and counter sanctions – the world has become crazy in general. This is not good for any businesses,” Alexei Koudrenko says.

“I hope it will come back to normal, but to be realistic this is the new reality and we have to somehow adopt to that reality.”

Construction start-up for the Belokamenka LNG-supply base north of Murmansk is said to be in 2017. It remains to be seen who gets the contract for deliveries of concrete.

Thai oilmen get invitation to Yamal