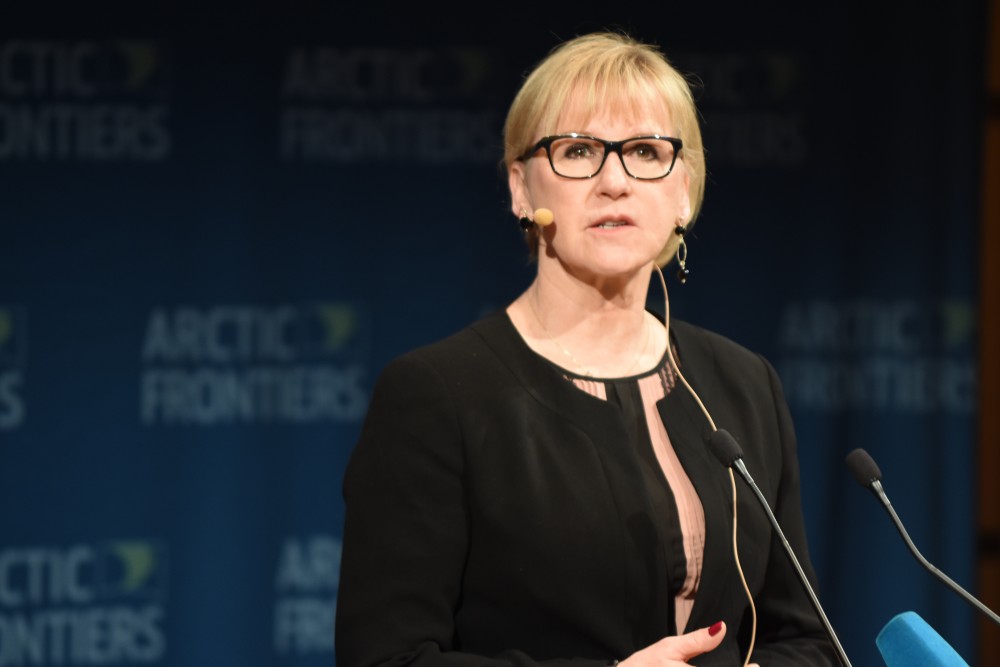 Swedish Foreign Minister supposed to take over chairmanship from Sergey Lavrov for next two years.
Read in Russian | Читать по-русски
By

Barents Council is the forum for intergovernmental cooperation on issues concerning the Barents Region. Meetings are every two years and chairmanship rotates between Russia, Sweden, Finland and Norway.

«We have not yet decided, that is something we will consider when it comes, Margot Wallström says to the Barents Observer.

She will not elaborate on when a final yes or no will be decided on.

«I don’t really know, but we believe dialogue is important, also with countries we have different opinions from,» Wallström says.

The Swedish Foreign Minister was this week attending Arctic Frontiers in Tromsø, a conference where Norway’s Foreign Minister Børge Brende also had invited Sergey Lavrov. The Russian Minister, however, turned down the invitation.

Neither Børge Brende nor Margot Wallström have been to Russia since Moscow’s annexation of Crimea in March 2014. Both have for the last three years been reluctant to press the re-launch button for high-level direct political talks by making official visits to Russia.

Asked the same question about traveling to the Barents Council meeting in Arkhangelsk this fall, Børge Brende says to the Barents Observer «… it is under consideration.”

Nor would he elaborate on the question.

Meanwhile, President Trump has vowed to improve relations with Russian.

For both Norway and Sweden, the dilemma is how to balance a cold shoulder towards Russia’s aggression in Ukraine versus the wish to continue a good dialogue across the borders in the high north. Other countries, like Finland, maintain high-profile ministers- and presidential contact with Russia. Other Western countries that have had their Foreign Ministers visiting Russia after the Crimea-conflict started are USA, Germany, Italy and France.

The Barents Cooperation has been less affected by troubled east-west relations than other international contact arenas between Europe and Russia. Especially on the regional level, contacts between poeple in the north continues across the borders to Russia. Although not with the same enthusiasm, national politicians still point to the Barents Cooperation as a well-working model facilitating for low tensions.

Sergey Lavrov attended the Barents Council meeting in Oulu in 2015 when he took over the chairmanship from Finland’s Timo Soini.

Nordic leaders have by several occasions underlined the importance of keeping the door open for Arctic dialogue with Russia.

Norway’s Prime Minister Erna Solberg said to the Barents Observer in November that open dialogue with Russia in the north is appropriate.

«In the north it is not as high tensions as we have seen in the Baltics. We have good cooperation with Russia on a lot of common areas and issues of importance,» Solberg said at a joint press conference with the Nordic and Baltic prime ministers in Copenhagen.

Margot Wallström is the only of the foreign ministers throughout the times of the more than 20-years lasting cross-border cooperation that is born in the Barents Region. Wallström was born in Skellefteå in Västerbotten.

If she decides not to travel to Arkhangelsk in October, Wallström will be the first foreign minister that hasn’t personally taken over the chairmanship of the cooperation since it all started with the Kirkenes declaration in January 1993. For Børge Brende - coming from the country that initiated regional cross-border cooperation with Russia - not traveling to Arkhangelsk means he will be the first Norwegian foreign minister not to attend a Barents Council meeting.

Børge Brende is also considering to participate at Russia’s Arctic Dialogue Forum, to take place in Arkhangelsk by the end of March, as previously reported by the Barents Observer.

Gleb Yarovoy, a former Associate Professor with Petrozavodsk State University says to the Barents Observer that interrupting the line of communication at the ministerial top level is the worst thing that can happen to the Barents cooperation.

«Communication is important. If Margot Wallström and Børge Brende don’t go to Arkhangelsk it will provoke symmetric reaction from Russia,» Yarovoy explains.

He believes the regional Barents cooperation still is very strong and its continuation have mutual interests on all sides of the borders in the north.

«But if a foreign minister does not participate at the Barents Council meeting, that will send a signal to the regional level that the cooperation isn’t that important longer. Why should a Governor or another regional leader bother to engage,» Gleb Yarovoy asks rhetorically.

Also Arild Moe, Researcher with the Fridtjof Nansen Institute in Oslo argues that the Barents cooperation stands strong even in times of trouble.

“It is in Russia’s own interest to protect the Barents cooperation,” he says. Moe, however, thinks political participation is needed.

“The regional cooperation is about developing new initiatives. Political interest to that is crucial,” Arild Moe says.

This looks like russophobia and paranoia, Russian MFA says to Finland