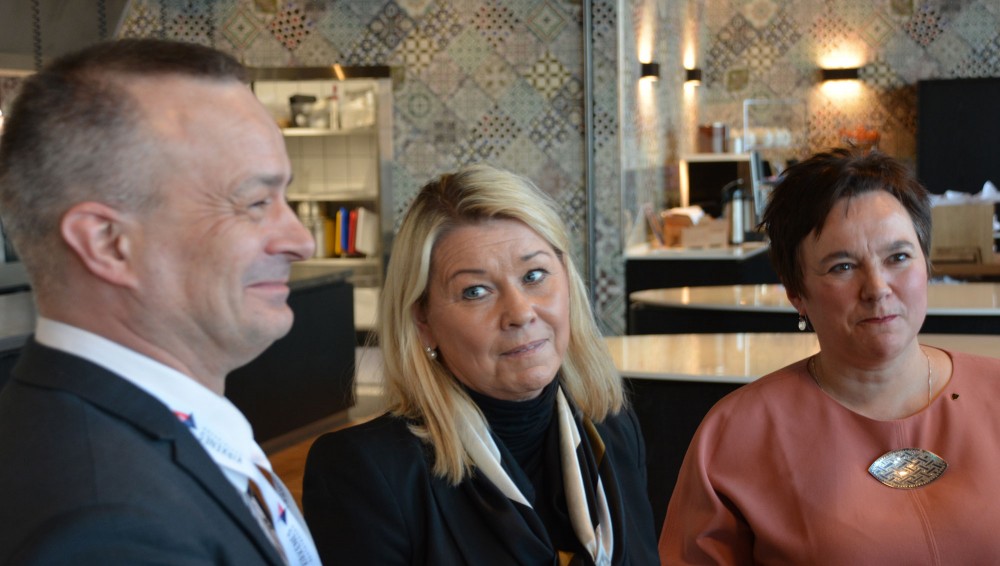 Regional authorities in Finnmark call on locals to go to the polls in what they hope will be a decisive vote against the national government’s merger of the country’s two northernmost regions.
Read in Russian | Читать по-русски
By

In an outburst of protest against Oslo, the regional government in Finnmark is holding one of the first ever regional referendums in Norway. People are requested to vote ‘yes’ or ‘no’ to the regional merger.

«I find it highly inconvenient to merge these two regions simply because of the huge distances in the area», says Anita Brekken. She is one of the locals who today cast her vote in the referendum. «Furthermore, Finnmark has something special, a kind of Barents identity, which must be preserved,» Brekken argues.

When the local polling station opened in Kirkenes today, there was a long line of voters in front of the door, an election official told the Barents Observer.

The Finnmark regional authority has long fought against the national government and its regional reform. In a meeting in mid-March this year, the Finnmark regional council decided that it would not consent with the proposed conditions of the merger and that a referendum would be organized.

In a comment, Council Speaker Ragnhild Vassvik underlined that the decision is supported by a «huge engagement among locals».

«They want to have their say, and we listen to them. […] It is about time that the people of Finnmark itself can voice its opinion about the government’s use of force […]», Vassvik said.

At the same time, she announced that the regional Council would stall all further talks on the conditions of the merger.

The decision comes after Vassvik in February signed an conciliatory agreement with Troms brokered by a government negotiator. According to that agreement, Finnmark would get responsibilities for several policy areas of key importance in Arctic governance, including international cooperation and climate.

That, however, was not enough for the regional legislators. They argue that Finnmark must remain a separate region and that a merger with Troms would weaken local democracy. They also warn that the region’s «special relationship» with neighboring Russian regions could suffer in case of a merger.

It has infuriated Monica Mæland, the country’s Minister of Local Government and Modernization, who has made clear that she will have to dictate the terms of the merger unless Finnmark itself takes part.

The decision to merge the two regions has been taken by the Storting, the country’s parliament, and Finnmark is obliged to obey, Mæland argues.

Regional authorities in Finnmark, however, see it otherwise. Ragnhild Vassvik is confident that the merger decision can be reversed if the local population votes against it in the referendum.

That view is supported also by Remi Strand, a leading Labour Party representative in the region.

«If there will be a ‘no’ in the referendum, the leader of the County Council will take with her the results to the Prime Minister,» he says to the Barents Observer.

«Here in Finnmark, we expect that the Prime Minister presents the case to the Storting. There are a number of new circumstances which indicate that a renewed assessment should be done and which show that Troms and Finnmark do not fit together.»

Strand has been a strong voice against the merger, and he was the one who in March drafted the Council resolution on a referendum.

In a comment published today in regional newspapers, Strand argues that «Troms wants to have all the resources of Finnmark», and that the Norwegian government is acting in a way which is «divisive against the people in Norway.»

The ongoing regional reform in Norway includes a reduction of the number of counties and an ambition to strengthen the regional level of power with the transfer of additional powers and areas of responsibility. Until before the reform there were a total of 19 counties in Norway. That number is now about to be reduced to ten. Currently, the county administrations in Norway are in charge of regional public transportation, dentist services, high schools, cultural affairs and business development.

We hope you enjoyed reading this article. Unlike many other media, the Barents Observer has no paywall. We want to keep our independent journalism open to everyone, including to our Russian readers. We therefore have a small favor to ask; make a contribution to our work.