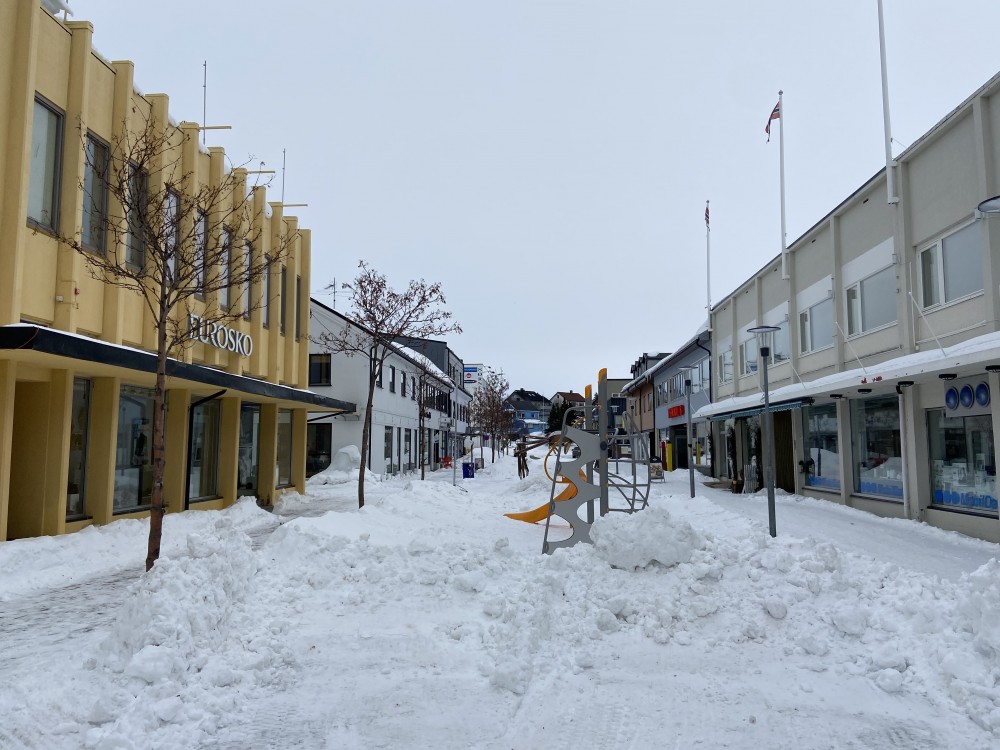 Nobody out: The pedestrian street in Kirkenes. Photo: Thomas Nilsen

Kindergartens, schools and universities will remain closed until after the Easter holiday.
Read in Russian | Читать по-русски
By

The Norwegian government on Tuesday extended until April 13 the nationwide lockdown with the strongest and most sweeping measures the country has seen in peacetime.

Norway has for the most been in an enforced hibernation since March 12: Kids are following class via the internet, those who can work from home, public transport, including air traffic, are partly halted, and shops are closing down day-by-day.

“The measures we have imposed appear to be slowing the transmission of the virus, but we need more time to see what effect they are having,” prime minister Erna Solberg said at the press conference when the prolongation of the measures was announced.

The aim is to limit the spread of the coronavirus, so the health service gets the capacity it needs to help all who get infected.

“We must continue our collective effort to stamp out the virus,” Solberg said.

The control of the internal Schengen borders, to Finland and Sweden, as well as airports and harbors, will continue. As previously reported, this is the first time in modern history that green-uniformed Home Guard soldiers are placed on Norway’s land borders to its Nordic neighbors.

One of the measures in effect is for people to maintain physical distance from one another. When out, at least one-meter distance from other people is required. Also, when away from home, there should be no more than five people in a group. Except for family members.

Some of the measures are heavily debated in Norway. Like the prohibition against staying at cabins, if the cabin is not in the same municipality as you live. Especially with the extension of the COVID-19 restrictive rules to last over Easter, the debate gets heated.

Going out of the cities to the cabin in the Easter, either in the mountain or by the coast, is almost sacred for most Norwegians. A tradition that has lasted for generations.

For now, northern Norway has fewer coronavirus cases than the south. Many northern municipalities have consequently said all people traveling in from the south should automatically enter a two-week quarantine. This ‘local-law-enforcement’ is questioned by the government who has called for an end to the quarantine-rules in the north.

The dispute fuels an already heated debate on north-south, or center-periphery, relations.