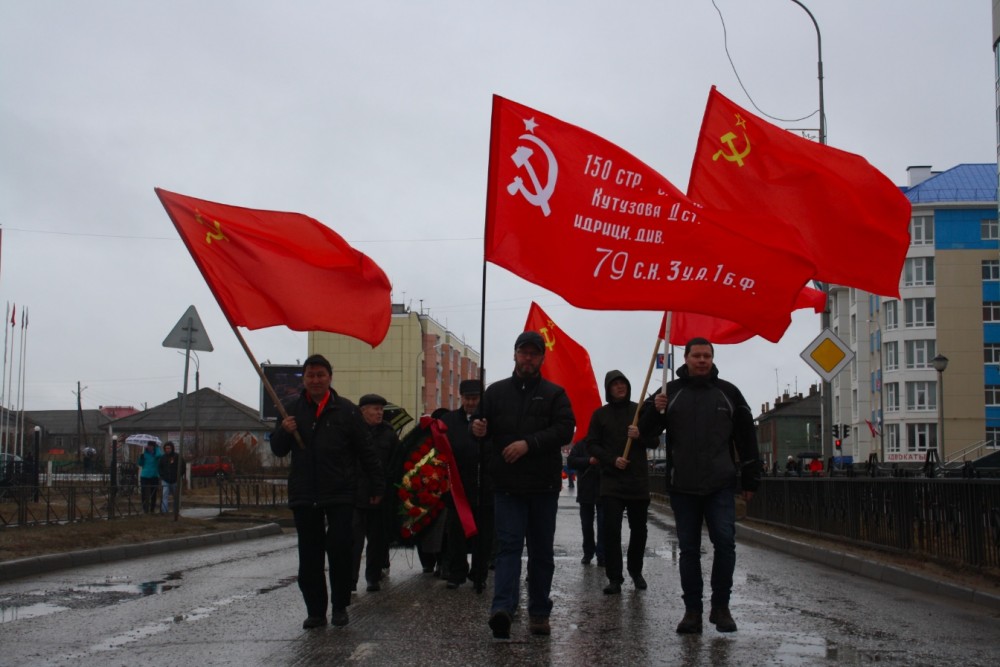 Communists on the march in Naryan-Mar, capital of the Nenets Autonomous Okrug. Photo: kprf-nao.ru

The far northern Nenets Autonomous Okrug is the Russian region with the lowest support for the United Russia. Independent observers say the State Duma elections were defamed by falsification and foul.
Read in Russian | Читать по-русски
By

Putin’s party of power, the United Russia, has comfortably secured a majority of the seats in the State Duma, the lower house of the Russian parliament.

Preliminary figures show that the party won 49,8 percent of the votes casts on party lists. In addition comes an overwhelming victory in the single-mandate districts. According to Party Leader Andrei Turchak, the United Russia will get a total of 315 of the seats in the legislative assembly.

That is a super-majority, which will allow the Party to rubber stamp any decision desired by the federal government and the Kremlin. The State Duma has 450 deputies, half of them elected from party lists and half from single-mandate districts.

“The secret behind the Party’s success is its every-day work for the welfare of people [and] the party has once again showed that it knows how to respond to challenges and take responsibility,” Turchak said in a comment on Monday.

The United Russia became the biggest party in practically all regions. With only two exceptions. Among them is the Nenets Autonomous Okrug, where Putin’s party was beaten by the Communists.

Preliminary results from the far northern region show that United Russia got only 27,8 percent of the votes against the 33,1 percent of the Communists.

It is not the first time that the Nenets AO goes against the tide in elections. In 2020, the small and oil-rich region was the only part of the country that voted against Putin’s constitutional reform. The population of the region counts only about 45 thousand, many of them indigenous Nenets people.

The results means that Oleg Mikhailov, the Communist Party representative that repeatedly has challenged Putin’s party in the region, gets a seat in the Duma. In 2020, Mikhailov intended to run against acting governor Vladimir Uiba in governor’s election but his candidacy was ultimately rejected by the regional election commission.

In his Novaya Respublika social media channels, Mikhailov has successfully managed to promote open political debate about the situation in the region, and he has strongly criticised Governor Uiba.

Meanwhile, in other north Russian regions such as Murmansk and Arkhangelsk, the United Russia won sweeping victories with 59 and 32 percent of the votes respectively. In the latter region, as many as five parties won more than 5% of the votes, among them liberal party Yabloko and new party “New People.”

According to the organization that has been branded a “foreign agent” by Russian authorities, candidates, observers and election officials were exposed to threats as well as outright force in a number of regions. A big number fo falsifications were reported at polling stations across the country, Golos informs.

That comes in addition to wide-ranging repressive action against opposition forces before the vote. A big number of liberal candidates, among them politicians associated with Aleksei Navalny, were barred from running and information channels blocked.

Russian authorities upped pressure against social media platforms, and on the eve of the vote Apple and Google removed Navalny’s “Smart Voting” app from their stores

Sources familiar with Google and Apple’s decision told journalists that the move was taken under pressure from Russian authorities, including threats to arrest the tech giants’ local staff.

OSCE will not send observers to monitor Russian Duma Elections