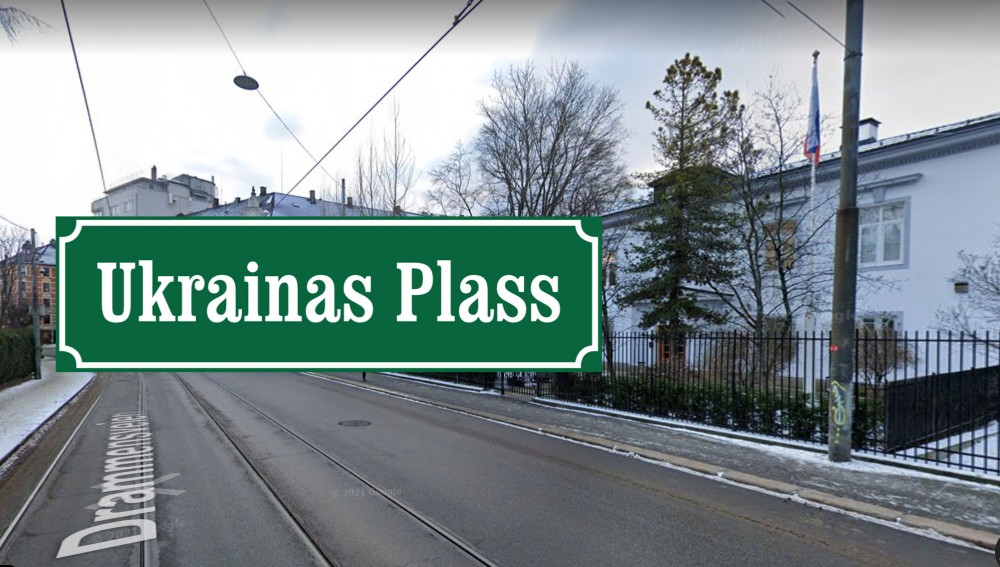 Collage by the Barents Observer

But the north Norwegian border town of Kirkenes does not want to give a new name to the square near its local Russian general consulate.
Read in Russian | Читать по-русски
By

City authorities in the Norwegian capital on Tuesday took a historical decision to name the street crossing by the Russian Embassy ‘Ukraine Square.’

Russian diplomats will soon be reminded about their neighboring country every time they enter and exit the flush compound in central  Oslo.

The decision will not result in an address change for local residents. But it is likely to appear an information sign about the name, newspaper Aftenposten reports.

The decision comes as a response to Russia’s invasion of Ukraine.

Oslo is not the first city that renames streets and squares near Russian embassies. Earlier this week, city authorities in Vilnius, Lithuania, decided that the Russian embassy road is to be named ‘Ukrainian Heroes Street’, Euractiv reports.

Reportedly, the mayor of a district in Prague has also called for a similar initiative.

Meanwhile, in the north Norwegian town of Kirkenes, local authorities oppose the renaming of the square near the Russian general consulate. Member of the local city council Brede Sæther in 2021 proposed that the local plaza is named the “Boris Nemtsov Square.”

“In the light of the latest development in Russia with lots of arrests of peaceful demonstrators, the persecution of journalists and the treatment of Aleksei Navalny and many others we find it important that Kirkenes as a place located near Russia shows its solidarity with the democracy movement in the country,” Sæther underlined in an interpellation.

However, the proposal was strongly criticized by fellow deputies and rejected by the council.

The same Brede Sæther on the 8th of March managed to persuade the local town council to agree on a joint statement that condemns Russia for its invasion.

Kirkenes is located only few kilometers from the border to Russia.

Local town Mayor Lena Norum Bergeng on the 24th of February told the Barents Observer that she condemns Russia’s attack on Ukraine. At the same time she argues that dialogue with the Russian side must continue.

“The dialogue and people-to-people cooperation will now be even more important than before,” she underlines.

The local municipality has two friendships towns across the border. Both of them are home to powerful military bases of the Northern Fleet; Severomorsk and Pechenga.

Severomorsk is the headquarters of the Northern Fleet.

“Severomorsk is our friendship municipality and I will do what I can to continue our people-to-people cooperation with them and maintain our friendship,” Bergeng told the Barents Observer.