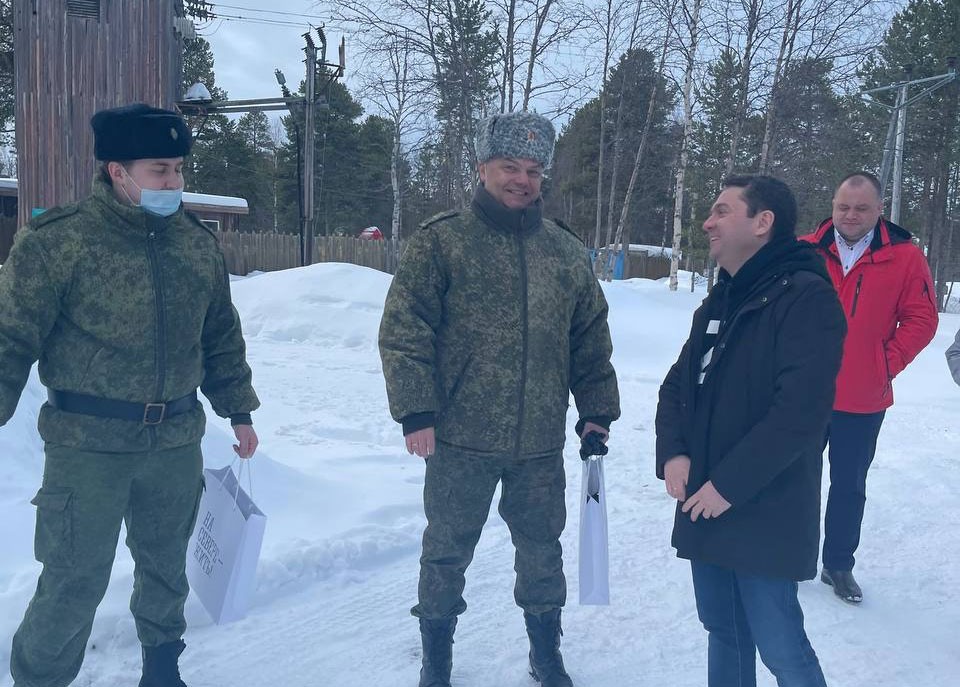 Governor Chibis greets border guards during his visit to village of Rajakoski located on border to Norway and Finland. He wears a sweater with the letter Z. Photo: Chibis on Telegram

Andrei Chibis had put on a shirt with Russia's war-symbol when he this weekend paid a visit to the Pechenga region.
Read in Russian | Читать по-русски
By

The Governor late last week made a tour across the municipality that borders on Norway and Finland. He started in Sputnik and Pechenga, the military towns that house the 61st Naval Infantry Brigade and the 200th Motorized Rifle Brigade.

The visit to the brigades comes as reports indicate that a big number of local soldiers have died during the invasion of Ukraine.

Chibis subsequently proceeded to the towns of Nikel and Zapolyarny. He also paid a visit to Rayakoski, the small village that is located along the Pasvik River, few hundred meters from Norway and Finland.

On photos from site, Chibis is seen wearing a sweater with a big Z, the letter that has a become symbol of his country’s war with Ukraine. During the visit he chatted with border guards that reportedly underlined they “have a fighting spirit.”

“I have great respect for their work to protect the borders of our Zapolyarie [polar areas],” the governor underlined on Telegram and used the letter Z in his spelling of Zapolyarie.

The letter Z does not exist in the cyrillic alphabet and many Russians have been baffled by its use in the war offensive. Many see it as a resemblance of the Nazi swastika.

The Z is painted on the tanks, armored vehicles and other military hardware that now is being used in Russia’s massive war crimes in Ukraine.

Andrei Chibis is far from the only regional leader that now actively promotes the Z in his work. Governors across the country line up in support of the Kremlin’s offensive and the Z appears to be practically everywhere.

Also the other prominent political leaders in Murmansk are highlighting their support to the so-called “special operation.”

Speaker of the regional Duma Sergei Dubovoy on his VK page underlines that “the bravery of Russian soldiers in the special operation against the Nazis in Ukraine will be written into the history as true examples of patriotism.” He actively shares war propaganda films and adds the slogans ZaRossiya and ZaNashikh (for our kin).

Also politicians that previously were considered moderate and partly liberal now express their support for the war.

“Russia has never been an aggressor, and the Russian solider has always been the symbol of peace and creativity, and not destruction,” says Yevgeny Nikora, the former city Mayor, now Deputy Speaker in the regional Duma.

The same position is expressed by town mayors and municipal leaders across the region. Among them is Mayor of the Pechenga Rayon Andrei Kuznetsov. Photos shared at his VK page shows the municipal leader driving around in a car decorated with large letters Z.

Meanwhile, federal representative of the Murmansk region in the State Duma, Tatyana Kusayko, argues that the new Western sanctions against Russia include plenty of opportunities for Russia.

“The West has cast a big challenge to the Russian economy, business and science, but in this situation Russia can mobilize all its capacities and become truly a country of opportunity,” she writes on her VK page.

Kusaylo and all her colleagues in the State Duma are now on the EU sanctions list. That also applies to the members of the Federation Council.

The Murmansk region’s representative in the Federation Council Tatiana Sakharova appears not to worry. “I fully support our president,” she underlines. “And I will relax in the Crimea,” she says in a comment.

Furthermore, she says that she is “confident that […] the people of Ukraine soon will feel calm, safe and that they will live under a peaceful sky.”