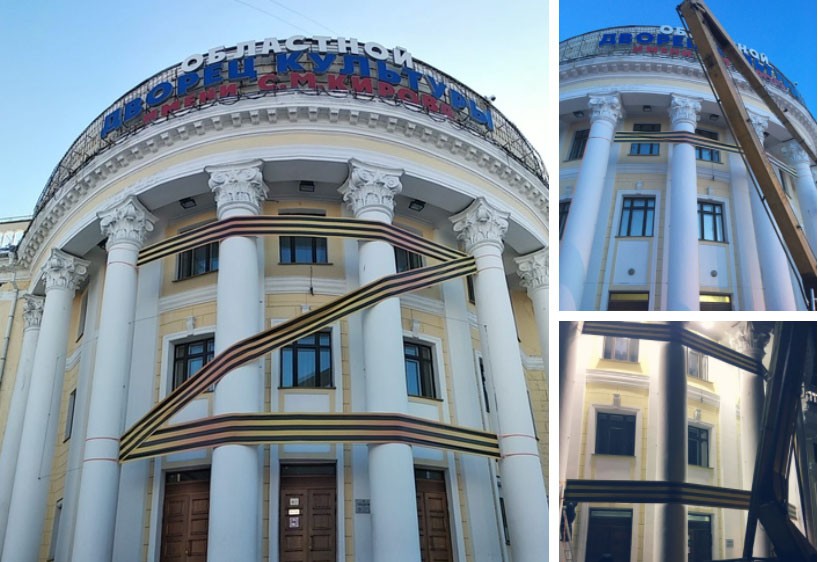 The Culture Palace in Murmansk

It is supposed to stage fine pieces of Russian art. But the cultural institution in the far northern city now first of all displays support to barbarian war.
Read in Russian | Читать по-русски
By

Through its history , the Cultural Palace in Murmansk has put on display many of Russia’s finest and most eloquent expressions of culture. Theater plays by world renown writers, music by its composers, dance and ballet, children’s songs, opera and poetry.
But for many, the Culture Palace will never be the same.
Across its majestic entrance now hangs a big orange and black banner in the shape of a “Z.”
It was put on the facade of the building on the 4th of April and the managers of the institution appear proud over their contribution to the ruthless and bloody war against an innocent neighbor.
As the banner was attached to the wall of the Cultural Palace, Russian soldiers, many of them from the Kola Peninsula, committed massive war crimes, killings and deliberate attempts to wipe out a nation.
“The Murmansk regional palace of culture and folk art named after S.M Kirov along with many other cultural institutions join the campaign to place the symbol of solidarity and support to our soldiers on its facade,” a post on the institution’s VK page reads.
To the post is added the letter Z in the slogans “Za Presidenta” (for the president), “Za Mir” (for peace) and “Zapolyarie” (the North).
And the Cultural Palace is far from the only cultural institution in the Murmansk region that has promoted war propaganda. On the web pages and social media of several  institutions are copied and reposted propaganda videos and photos.
Among them is the Severomorsk Culture Center that has posted war propaganda videos on its pages.
Similar cases can be found across the country. In Karelia, the region that borders on Finland, the Petrozavodsk Philharmonia has attached a similar banner with the “Z.” However, in that town someone soon stained the war symbol with red paint, resembling blood.
Murmansk has since Russia launched its massive invasion on the 24th of February promoted itself as a region that strongly supports the onslaught. Governor Andrei Chibis has traveled across the region wearing a sweater with a large Z, and also held meetings with federal ministers in the same sweater.
Chibis is a close associate of Vladimir Medinsky, the Russian presidential adviser and chief negotiator in the talks with Ukraine. Medinsky is also former minister of culture and by many considered an ultra-radical hardliner and nationalist. The two men met the day before the attack on Ukraine, and also after the start of the war.

The region’s Culture Palace is owned by the Murmansk region and funded by its regional Ministry of Culture. Since the start of the invasion, the government body has repeatedly expressed its support for the war action. On its social media, the ministry has repeatedly posted the “Z” and linked up various patriotic information and war propaganda. Among the latter is a  post by Nikolai Ivanov, chairman of Russia’s Union of Writers. According to Ivanov, who himself has military background, the Z has “given the whole world a lesson.”

“Z - this is  main strike against recklessness and the desire of our “dear partners” to rule over our minds and territories, research and production, laws and psychology, over our youth and our future,” he writes.

According to Ivanov, the Z has “from now on and for ever changed the psychology of war, when the soldiers that undertake the special operation sacrifice themselves for the preservation of the lives of others.”

The Z symbolizes a unity of the armed forces, people and power in a way that was unthinkable yesterday, the Chairman of the Writers’ Union says.

Meanwhile, for others the Z symbolizes nothing but Russia’s bloody and cruel war and bears resemblance of the Nazi swastika.