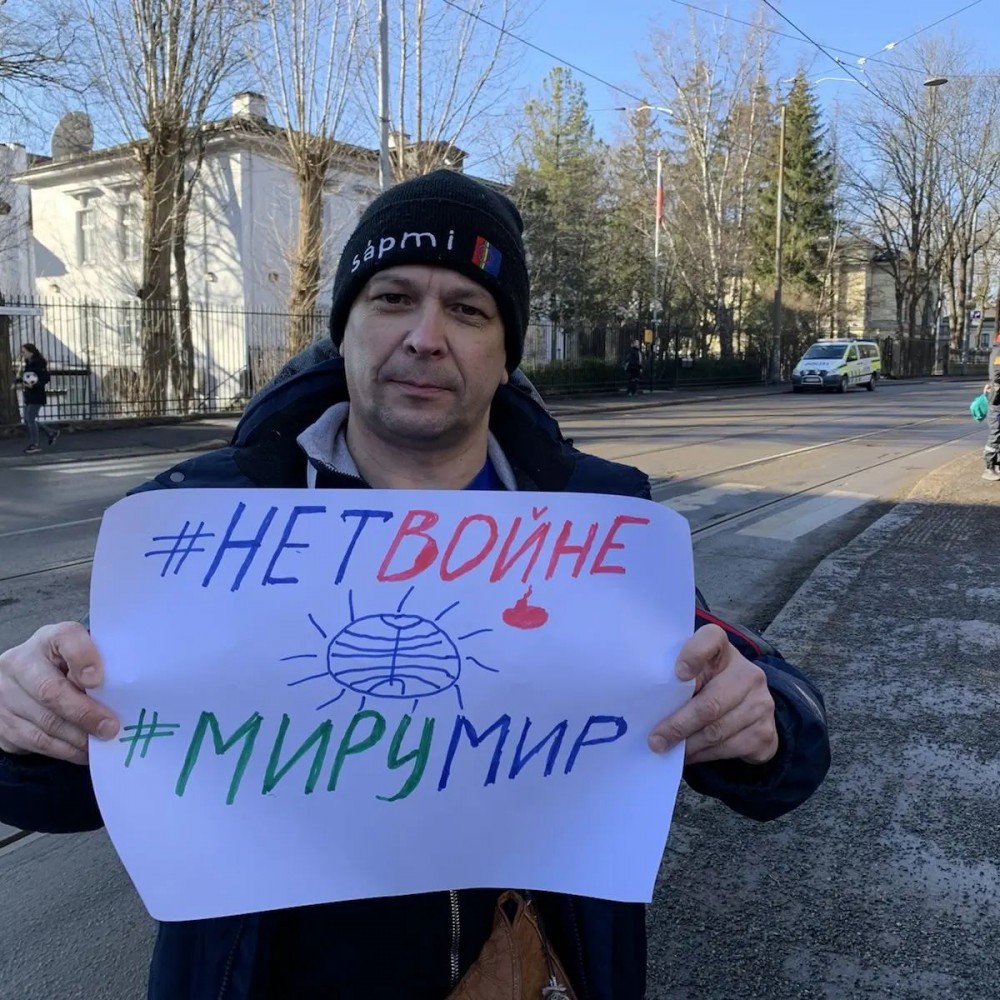 Andrei Danilov, a Kildin Sami activist from the Kola Peninsula protesting the war against Ukraine outside Russia's Embassy in Oslo. Photo: Private

“I can never return to Russia before the genocide regime is changed,” says Andrei Danilov, a Kildin Sámi from Olenegorsk on the Kola Peninsula.
Read in Russian | Читать по-русски
By

Danilov is a well-known Sámi politician and member of the Sámi Council’s Culture Committee. The Council represents the Sámi across the borders in Russia, Finland, Norway and Sweden.

A few days after Putin launched Kremlin’s bloody war on Ukraine, Andrei posted a photo of himself holding an anti-war poster in front of Russia’s Embassy in Oslo “No War - Peace on Earth”.

“My decision is to seek political asylum,” he says to the Barents Observer.

“In Norway, I can freely and safely speak the truth and fight for the rights of indigenous peoples,” Danilov argues.

While Andrei Danilov in Norway can voice his opinion against the war and freely debate challenges for indigenous peoples in the Arctic, the space for debate inside Russia is of another kind.

Both the Chairman of the Council of Indigenous Minorities under the Government of the Murmansk Oblast and a representative for the Association of the Kola Sámi participated in the war support rally on the anniversary day of Crimea annexation. The propaganda show was headed by Governor Andrei Chibis who stood on stage wearing a hooded sweater with a “Z” on the chest.

In Lovozero, the main Sámi settlement on the Kola Peninsula, supporters placed the “Z” on reindeer, echoing Kremlin’s narrative on the Russian army’s so-called denazification of Ukraine.

NRK Sápmi was first to report about the event and posted a video from the staged support.

Andrei Danilov is not the first representative of Russia’s Arctic minorities to flee the country for political reasons. Exile indigenous peoples representatives have on several occasions voiced their protest against environmental problems caused by mining and industrial pollution. The protests from abroad, like after the big oil spill near Norilsk in Siberia, are often met by counterarguments by indigenous peoples in Russia.

So also when it comes to the ongoing war in Ukraine.

RAIPON says these “figures” living abroad that signed the appeal against the war in Ukraine have “lost contact with their native land” and “have no moral and factual right to speak on behalf of and express the opinion of our peoples.”

The statement says Russia is not responsible for the ongoing tragedy of killing civilians, illegal occupations of Crimea, or violating the rights of indigenous peoples of Ukraine.

“Indigenous peoples of our country have been living and developing as part of the Russian state for more than a thousand years,” RAIPON argues. The header to the statement consists of a new indigenous peoples art symbol with the text ZaRossiyu (For Russia) written with the “Z”.

The exile indigenous community’s statement is “strongly condemning Putin’s war against Ukraine and demands respect for human rights abroad as well as at home.”

In Norway, Andrei Danilov says he will continue fighting for Sámi rights. “I have not left my homeland, but moved to another area in Sámi-land,” he underlines.

President of the Norwegian Sámi Parliament, Silje Karine Muotka, says to NRK Sápmi that she supports Danilov’s right to get asylum.

“The Sámi is one people in four counties. Our traditional areas of living are in Russia, Norway, Finland and Sweden.”

Muotka notes that also after national borders were drawn the Sámi have lived as one people with the same cultural heritage and affiliation to Sámi areas.