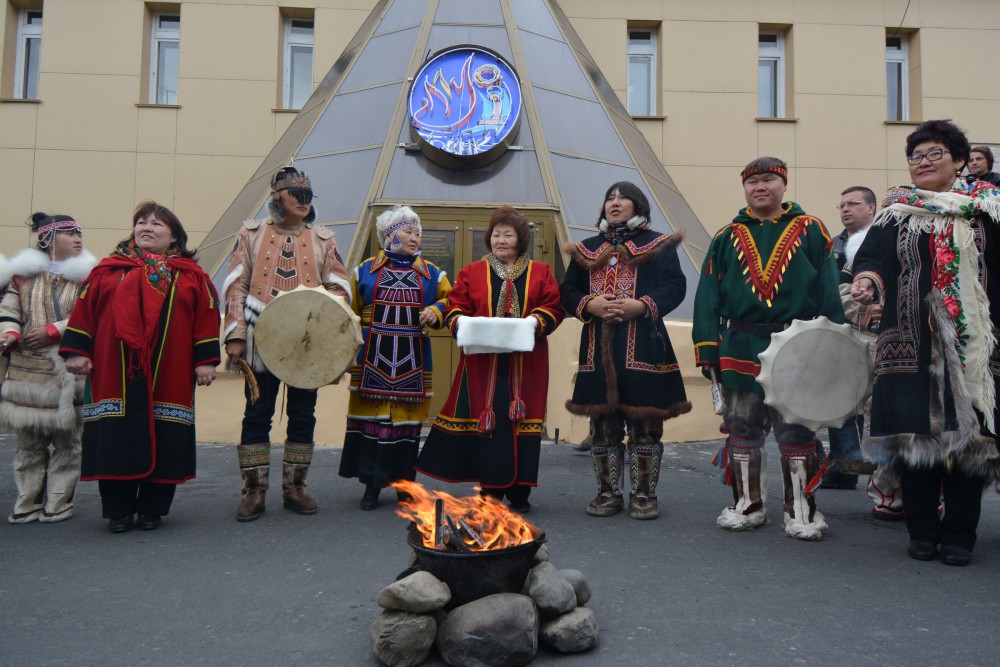 Representatives from several of the indigenous peoples living on the Taimyr Peninsula gathered in the town of Dudinka by the Yenisei river where Norilsk-Nickel is shipping out metals. Photo: Thomas Nilsen

After the oil spill, we see positive changes in policy and approaches to interaction with the indigenous minorities, says Grigory Dyukarev, head of the Association of Indigenous Peoples of the North on the Taimyr Peninsula.
Read in Russian | Читать по-русски
By

A year has passed since a fuel tank owned by a subsidiary of Nornickel ruptured, causing more than 20 thousand tons of diesel to leak into soil and waterways near Norilsk in the Russian Arctic.

The ecological disaster made worldwide headlines and the mining metallurgical giant had to pay a record 146 billion rubles (€1,62 billion) fine to cover environmental damages caused by the spill.

For Nornickel, a company controlled by some of Russia’s richest oligarchs, the spill became a serious wake-up call.

They have entered agreements with associations of indigenous peoples of Russia, says Grigory Dyukarev to the Barents Observer.

“Together with the communities and our organization Nornickel has developed a five-year development program for 2 billion rubles (€22,1 million), which includes funds for the construction of new houses in the villages, for transport means, developments of community crafts, and for assessment of commercial resources, fish and deer,” explains Dyukarev.

He underlines that all these obligations by Nornickel are agreed upon not only with his organizations but also three other indigenous peoples organizations in the Russian north.

A coordination Council headed by Nornickel will monitor and determine how efficiently the allocated funds will be used.

“We expect to plan development of the community economy and the infrastructure of the villages in team with the company,” says Grigory Dyukarev.

Nornickel confirms in a statement it will involve indigenous northern minorities directly when making the project list.

He lists several initiatives in settlements on the Taimyr Peninsula, like reindeer meat processing facilities, freezers, equipment for skin souvenir production and studies of fishery resources.

“All these projects are joint initiatives whose success depends on close contact with the communities and families of indigenous northern minorities,” Grachev said in a statement posted on the company’s portal.

Nornickel has already paid 177 million rubles (€2 million) in direct compensations to 51 communities, farms and families that fish in the Pyasina, the river severely polluted after the diesel-tank leak last spring.

There are some 10,000 indigenous peoples living on the Taimyr Peninsula, including Nenets, Dolgans, Nganasans and Enets. The peninsula, which forms the northernmost part of mainland Eurasia, is twice the size of Norway and lies between the great Yenisei river flowing out to the Kara Sea and the Khatanga Bay of the Laptev Sea.

Norilsk, infamous for its massive air pollution, is the largest city with about 175,000 inhabitants.

“The relationship with Nornickel, with which we have lived and worked for 85 years, did not always suit us,” says Grigory Dyukarev. “There were problems,” he admits, but adds “we solved them together.”

Dykarev considers it natural for the native people to cooperate with big business for the sake of preserving the culture, languages, crafts and traditional nature management.

“Funding by a large company of projects for the development of everyday life, crafts and culture of the indigenous peoples and payment of compensation is a generally accepted world practice,” he explains.

“This does not mean that someone buys someone else’s loyalty or soul,” Dyukarev underlines.

The Barents Observer has previously interviewed Pavel Sulyandziga, president of the Batani Foundation, an exile group working for the rights of indigenous peoples in the Russian north.

He said Nornickel is used to dictate conditions to everyone in Russia. “In Taimyr, Nornickel is the Tsar and the God at the same time,” he claimed.

Sulyandziga claimed Nornickel brings in only those indigenous peoples who can paint a “beautiful picture” of the company’s activities.

“Those who ask inconvenient questions, about various violations and problems, are simply excluded,” he added.

The Batani Foundation was by the Russian government declared as a “foreign agent” in 2016 and two years later, the organization was liquidated by the Moscow city court after a demand from the Ministry of Justice.

Since then, the group has worked in exile, with staff members asking for asylum in the United States, Norway and Sweden.

The shut down of an advocacy group that on behalf of indigenous peoples talked about human rights, cultural preservation and environmental protection follows a pattern of clampdown on voices criticizing authorities, explained Dmitry Berezhkov, the former vice president of RAIPON, the Russian Association of Indigenous Peoples of the North, Siberia and the Far East in a previous interview with the Barents Observer.

Berezhkov, who now lives in Norway after fleeing Russia, said he believes it was important for Moscow to clear the room and remove critical voices ahead of its Arctic Council chairmanship.

Russia takes over the chair of the Arctic Council at the ministerial in Reykjavik on May 20 for the next two-year period.

Meanwhile, on the Taimyr Peninsula, Grigory Dyukarev with the regional indigenous peoples association strongly disagrees with the head of the Batani Foundation that Nornickel only talks with loyal organizations.

“We consider Mr. Sulyandziga’s accusations as offensive against the indigenous peoples of Taimyr that some companies bribe us, pay for loyalty and force us to paint a rosy picture,” Dyukarev says.

“We are sure that he should not make public statements about Taimyr and the indigenous residents of the area without knowing us and not communicating with us,” Grigory Dyukarev states.