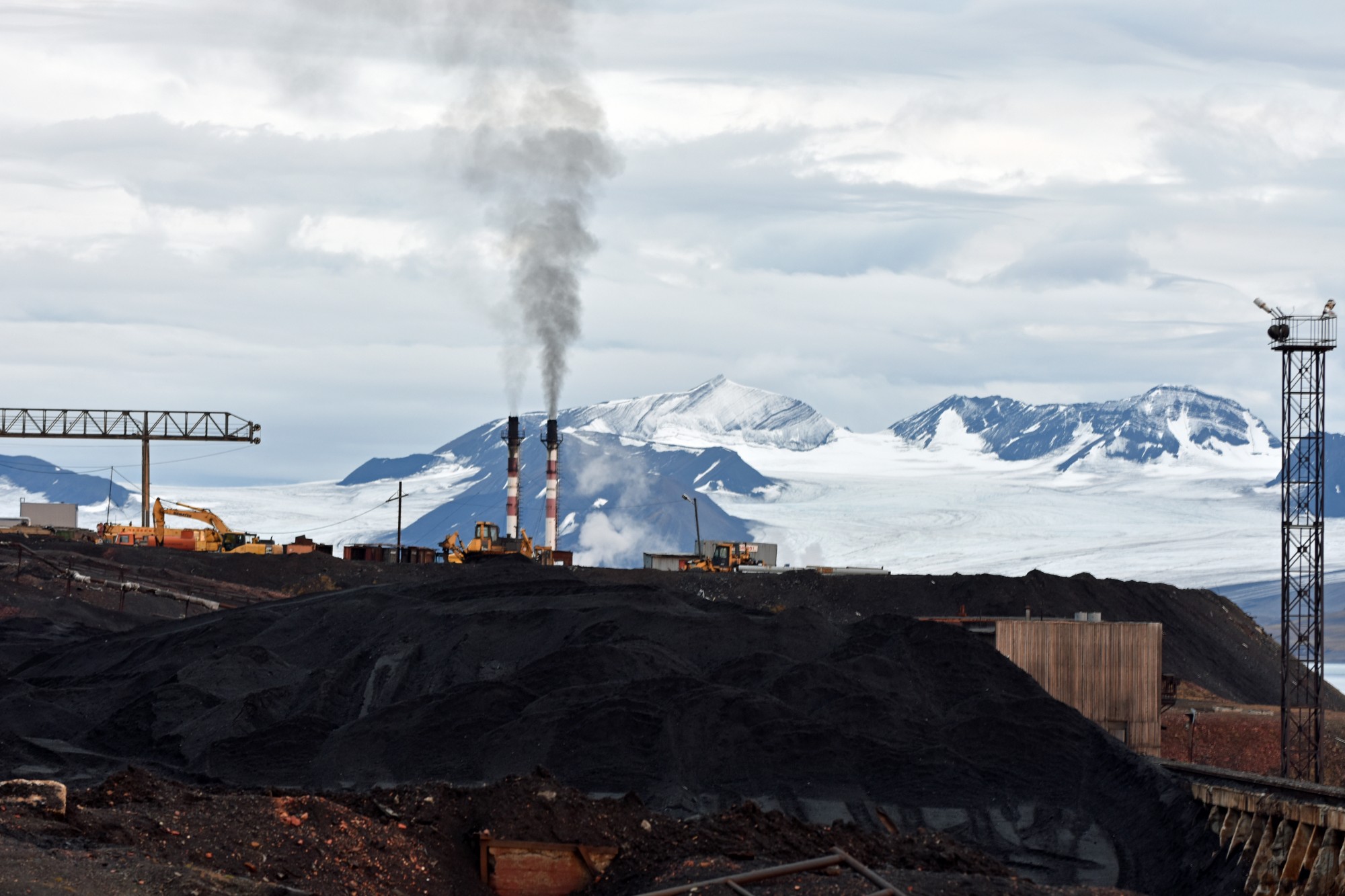 For visitors, the Russian town on Norway’s Svalbard archipelago combines the contrasts of pristine Arctic beauty and Soviet style industry. Nowadays, however, Barentsburg is reshaping its business-focus to become a modern Russian hub for explorer travellers.
Read in Russian | Читать по-русскиRead in Chinese | 阅读中文版

Walking the wooden, steep stairway from the port to new hotel is a ten minutes tour-de-divergence. If you look north, the midnight sunset colours the fjord and the glacier in the horizon in Arctic bright orange. Look south, and the far-away glacier is partly hidden by smoke stacks polluting the horizon with the same blackish colour as the coal piles covering the permafrost.

In times of climate changes, the view couldn’t be more contradictory; a coalmine with a smoky coal power plant in front of a melting glacier. In recent years, the Arctic, and especially Svalbard, has warmed twice as much as the rest of the planet. Presumably owing to warming, most of the glacier retreat rates on Svalbard have increased several folds in recent decades. That includes the Grønfjord glacier just south of Barentsburg.

Barentsburg is the only remaining Russian permanent settlement on Spitsbergen, the largest island on the archipelago. Svalbard is under full Norwegian sovereignty, but according to a 1925 treaty, all signatory countries are granted non-discriminatory rights to fishing, hunting and exploring mineral resources. For Russia, that means coal mining.

The Svalbard Treaty says no military bases should be established, but still, the cold coasts here on the northern edge of the Barents Sea are of huge geopolitical importance. Both during the Cold War, and nowadays with increased militarization of the Arctic, Svalbard plays a potentially important role in case of conflict. The one controlling Svalbard is likely to control voyages in the Barents Sea, the main route for Russia’s nuclear submarines and surface warships based on the Kola Peninsula.

Being present with activity at Svalbard is key for both Moscow and Oslo. For Norway, whose coal mining activity in Svea is being shut down, science and tourism have risen as two new pillars to maintain Longyearbyen settlement with a population of more than 2,000 people.

Like for the Norwegians, coal mining is not either profitable in Barentsburg. Last year, 140,000 tons of coal were taken out from beneath the permafrost, more than a kilometre down below sea level. 30,000 tons were burned at the local coal power plant, providing heat and electricity to the settlement. The rest was shipped to Great Britain. About 150 people, mainly Ukrainians, work in the state-owned mining company Trust Arcticugol (Arctic Coal).

With about 450 inhabitants, this is a company town by all means. Consequently, it is Trust Arcticugol that now has initiated a tourism leg of its organization.

Branded GoArctica, 18 employees are fulltime occupied with tourism. A new hotel with room for 90 is established and a hostel gives roof and bed for more. The port is renovated and a handicraft centre is opened. In short, buildings in Barentsburg have undergone a significant facelift the last few years. A souvenir shop is opened and signs in English direct foreign visitors to the various sights. “But, we needed something special to draw attention,” says Ivan Velichenko, one of the all-rounders and enthusiasts working with GoArctica.

“So we decided to established a brewery,” Ivan says with a smile. The town’s old laundry house was reconstructed and in moved both the brewery and a combined bar and restaurant. The Red Bear Pub & Brewery proved to be a success.

We needed something special to draw attention. So we decided to establish a brewery, the world’s northernmost.

“It is actually the northernmost brewery in the world,” Velichenko proudly announces. But well, together with Longyearbyen, most things up here at 78°N are the world’s northernmost. Like the school, culture house, sport hall, swimming pool, museum and library.

Except passengers arriving on cruise ships, all visitors to Barentsburg have to come in via Longyearbyen where the only airport with flights to mainland Norway is located. In winter, snowmobile tours to Barentsburg are popular. During summer, many of the Norwegian tour operators sail to different destinations along Isfjorden, including Barentsburg. GoArctica has its own boat, painted blue and yellow, the colours of the Ukrainian flag. 60% of the inhabitants in Barentsburg are from Ukraine.

Arild Moe, a senior research fellow with the Fridtjof Nansens Institute has for decades studied Russian Arctic policy. He says it is hard to anticipate the potential for tourism in Barentsburg. “Russia wants to maintain a presence at Svalbard. That will still be centred to Barentsburg where it over the last years has been invested significantly in buildings and infrastructure. But how big this presence should be is likely also a discussion in Russia,” Arild Moe says.

“Our first real efforts to serve tourism came in 2013 and a dedicated branch of Trust Arcticugol was established in 2015,” tells Ivan Velichenko. “Today, we have guides, drivers, bartenders and others.” He explains how they want Barentsburg to image itself as a modern Russian society in the Arctic, rather than a preserved Soviet-style industrial town.

We will make Barentsburg a centre for the Russian Arctic.

“We will make Barentsburg a centre for the Russian Arctic,” Velichenko proclaims. He says the Soviet-style nostalgia will still be kept in Pyramiden, another Russian coal mining settlement on Spitsbergen that was closed down in 1998. At Pyramiden, GoArctica organizes guided tours, runs a small hotel with a bar and has removed tons of industrial waste and garbage over the last years. “The comrade will remain in Pyramiden,” Ivan Velichenko smiles, thinking about the bust of Lenin that stands on top of the ghost town’s main street in front of the once proudly cultural palace.

For now, a bust of Lenin is also still highly visible in Barentsburg as well. Behind Lenin, and in front of Svalbard’s first multi-storey residential building, reads a huge slogan “Our goal is communism.” Another well-known Soviet slogan, “Peace to the world”, decorates the mountain behind.

“We plan to erect a statue of William Barentsz,” Velichenko tells. The Dutch explorer from the 16th century is the one the town is named after. It was also the Dutch that first started to dig for coal in Barentsburg before the mines were bought by the Soviet Union in 1932.

Although being optimistic about future growth for tourism, Ivan Velichenko admits that there are big challenges ahead. “We have too little supply of fresh fruit and vegetables and of course the mining brings pollution that does not look good for visitors.”

Being the same company that operates the mines, the tourism branch of Trust Arcticugol and the miners have agreed to take advantage of the rare atmosphere down deep. Tourists can buy a guided tour into the mountain, walking the same entrance tunnels as the coal miners themselves. Dress up in protection clothes and experience how temperatures inside the permafrost is colder than the Arctic frontier summer outdoor.

It is unclear for how long the mine can continue. The miners are working deeper and deeper. For now, it takes more than an hour to get down to the tunnels where coal is extracted. Also, coal mining is dangerous with several fatal accidents over the years. That brings fear to a small community like Barentsburg.

In 2013, following three serious accidents, two causing death and one when a man lost his leg, Norwegian authorties closed the mines temporarily due to low safety standards. Safety was improved and production was re-started the year after. Even though being operated by the Russians, it is Norwegian law that apply all activities at Svalbard, including safety rules.

“Russian-organized tourism is no exception. Planes and helicopter transport are nothing anyone can easily do, more than what is needed for the mining activities. The Russians have protested this,” tells Arild Moe. “However, they must also, like others, obtain permission from Norwegian authorities whenever they want to use helicopter to transport tourists.”

In 2018, a helicopter crashed at sea killing all eight on board. Another helicopter is based at the helipad station at Kap Heer just north of Barentsburg, mainly flying passengers to and from Longyearbyen airport.

For GoArctica, the airport in Longyearbyen is gateway for incoming tourists. “There are charter-flights from Moscow bringing in coal miners. From this year, we have started to include tourists as passengers on these flights in one direction,” tells Ivan Velichenko. Longyearbyen is about 55 kilometres from Barentsburg. That is an hour and a half by boat depending on vessel and weather.

Since Svalbard is open for citizens of all signature countries to the treaty, Schengen visa-rules do not apply. But since most flights go to Oslo or Tromsø, a Schengen-visa is needed. More direct flights from cities like Moscow or Murmansk, either charter or regular scheduled, could boost number of Russian tourists. Norwegian aviation authorities, however, are not very eager to grant new scheduled flights permission to land in Longyearbyen. In 2016, Finnair was refused to operate a summer route from Helsinki.

Additional to receiving tourists in Barentsburg, GoArctica organizes expedition tours to other sights. Like to Grumant, another abandoned Soviet settlement on the coast to Isfjorden. Here, the houses can still be used for overnight stays. Grumant is the old name Russian pomors gave to Svalbard hundreds of years ago.

“Last year we had 32,000 visitors to Barentsburg and Pyramiden. That generated a income of 120 million rubles,” Velichenko says. “Even though only 600 of those were Russians, they stood for 40 percent of the turnover because they go for longer tours, maybe 4-5 days.”

“Barentsburg is a great entrance to the Russian Arctic,” Ivan Velichenko explains. Cruise liners can sail directly from Svalbard to Franz Josef Land, like Poseidon Expedition did several times this summer. “We have a Russian Consulate General here in Barentsburg, which can issue Russian visas. That is great.”

Barentsburg could be the tourist gateway to the Russian Arctic.

In April 2018, tourism development was on the agenda as a Russian government commission met on Svalbard. An action plan for tourism development is to be elaborated, the Commission decided. The plan will includes ways to boost the use of Murmansk and Arkhangelsk sea ports in transporting tourists to Svalbard, a government press relase said after the meeting.

Meanwhile, the mining company’s tourist business is moving forward step by step. Plans includes another new hotel, maybe within the next few years. A supermarket will come and GoArctica will be around 100 employees, Velichenko predicts.

“Tourism will grow while mining is likely to decrease.”

Click on the gallery below to see more photos from Barentsburg.