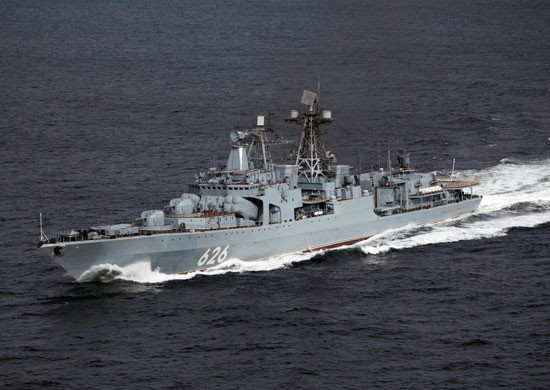 «It is another step in our development of the region», Fleet Commander Nikolay Yevmenov says.
Read in Russian | Читать по-русски
By

The Northern Fleet destroyer «Vice Admiral Kulakov» was greeted as it on Friday returned to home base Severomorsk after more than five weeks along the Russian Arctic coast.

Along with several other vessels, among them the new weapon transportation ship “Akademik Kovalyov”, the destroyer has visited four of Russia’s archipelagos, the New Siberian Islands, the Northern Islands, Franz Josef Land and the Novaya Zemlya.

It is the first time that all the archipelagos have been visited during one mission, Northern Fleet Head Commander Nikolay Yevmenov said in a speech to the returning sailors.

«With this mission, the Northern Fleet has made another important step in its development of the Arctic», Yevmenov underlined.

The mission was also the first ever in Arctic waters with participation of ships from both the Northern and Pacific Fleets, a press release from the Navy reads.

The operation, which stretched over 40 days and included about 9,000 miles of sailing, was conducted under the leadership of Captain Ildar Akhmerov.

During the voyage, the sailors engaged in combat training along the coast of Kotelny, the New Siberian Islands. In the Alexandra island in Franz Josef Land, elite soldiers from the Arctic Brigade conducted a landing operation.

Solders also conducted landing operations on Cape Chelyuskin in the Taymyr Peninsula and on the island of Golomyanny at Northern Island.

According to the Northern Fleet, the vessels encountered «difficult sailing conditions» in the Vilkitsky  Strait and in the Laptev Sea and were escorted by nuclear icebreaker «50 Let Pobedy».