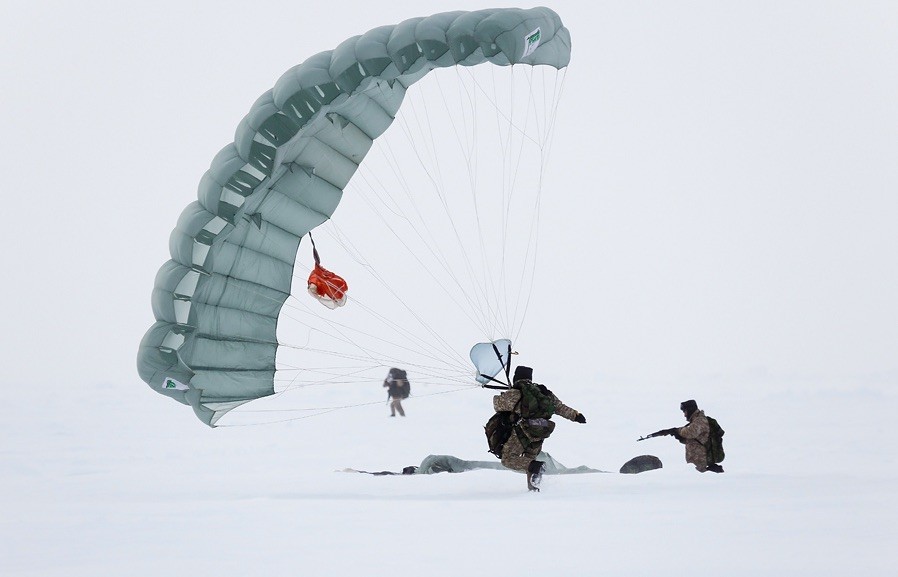 We now have a whole battalion of paratroopers trained in Arctic operations, the Russian Military says.
Read in Russian | Читать по-русски
By

In the period between 2014-2016, the Russian Air-Borne Forces has trained more than a battalion of troops in operations on the North Pole and the extreme Arctic, the Armed Forces press service informs.

In total, more than 300 troops made three landings on drifting ice. They all applied the «Arbalet-2» parachutes, which are designed for extreme conditions.

The troops were given more than 600 hours of training in landing, as well as emergency and rescue operations. Involved were paratroopers from the airborne units of Ivanovo, Tula and Pskov.

The last paratrooper expedition to the North Pole took place in April 2016 and almost triggered a diplomatic scandal in relations between Russia in Norway, as the Russian troops and their equipment used Svalbard as transit point.

The Svalbard Treaty of 1920 prohibits naval bases and fortifications and also the use of the archipelago for war-like purposes.

In April 2015, nearly 100 paratroopers from Ivanovo and Pskov together with soldiers from Belarus and Tajikistan landed at 89° north after jumping from planes in -60°C. In cooperation with the Russian Geographic Society´s Expedition Center they established a camp close to Barneo, where they for several days conducted drills on setting up camps in case of emergency situations with vessels on the Northern Sea Route or with planes on transpolar air flights.

In April 2014 more than 90 paratroopers from the Ivanovo-based 98th Airborne Division jumped from an Ilyushin Il-76 airplane onto the Barneo base near the North Pole point.