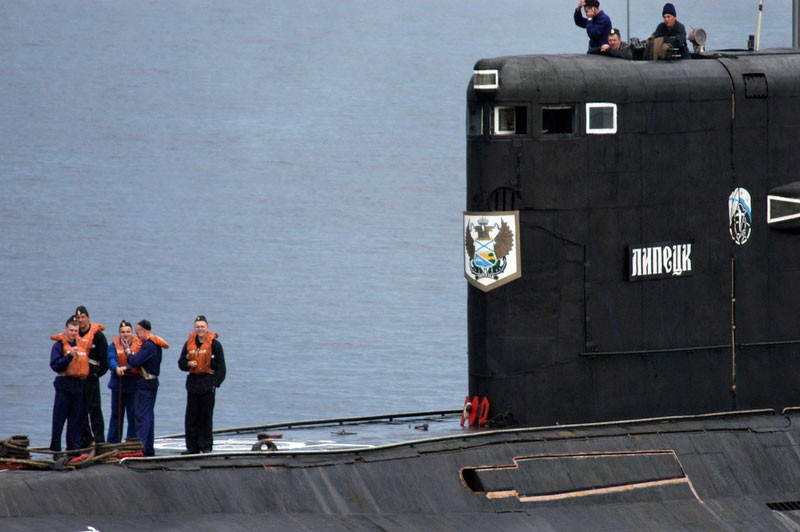 Crew members on board a Russian Kilo-class submarine sailing for the Northern Fleet. Photo: Thomas Nilsen

On the eve of Victory Day May 9th, more than 20 vessels sail out for combat training in the Barents Sea at the same time as NATO vessels are on exercise outside Northern Norway.
Read in Russian | Читать по-русски
By

All over Russia, Victory Day has been celebrated. With parades on the Red Square in Moscow, along Prospekt Lenina in Murmansk, and most other cities across the country. In Severomorsk, the Headquarters of the Northern Fleet, navy vessels have been lined up at piers and in the waters outside.

By noon Tuesday, the Russian Ministry of Defense announced that more than 20 vessels from the Kola flotilla, both surface warships and submarines, will sail out in the Barents Sea Tuesday evening for combat training.

The training will continue until the end of May, according to the ministry.

Also, aircrafts and helicopters from the Northern Fleet and the Air Force and air defense units from the fleet will participate.

The exercise starts simultaneously as NATO vessels from Norway, Germany and the United States conduct the exercise EASTLANT 17 in the waters outside Troms and Finnmark in Northern Norway, as reported by the Barents Observer last Friday.

The NATO vessels include both Norwegian and German submarines as well as surface vessels and «will be conducted in the coming weeks,» Commander (SG) Per Rostad, Chief Public Affairs officer with the Royal Norwegian Navy told the Barents Observer.

«The aim of the exercise is to train participating units in warfare,» he said.

Also in March, when Norway had 8,000 soldiers on winter exercise in Finnmark, the Russian Northern Fleet kick-started a naval exercise in the Barents Sea. Russian submarines then demonstrated underwater stealth technology in a cat-and-mouse game. Both British and American soldiers participated in the Norwegian exercise.

Despite “colder” political climate between Norway and Russia over the last few years, there are still a lot of positive practical cooperation in northern waters, including fisheries management and Search- and Rescue cooperation involving both the Norwegian and Russian coast guards.

On May 31st, a joint Norwegian-Russian exercise involving the coastal administration, coast guards, port authorities and environmental agencies will take place in the waters outside the Kola Peninsula. The exercise, named «Exercise Barents» is one of very few arenas where vessels from a NATO country will sail side-by-side with Russian military vessels.

The scenario for the exercise this year is search and rescue of people in distress at sea, as well as prevention of oil pollution from Arctic waters.