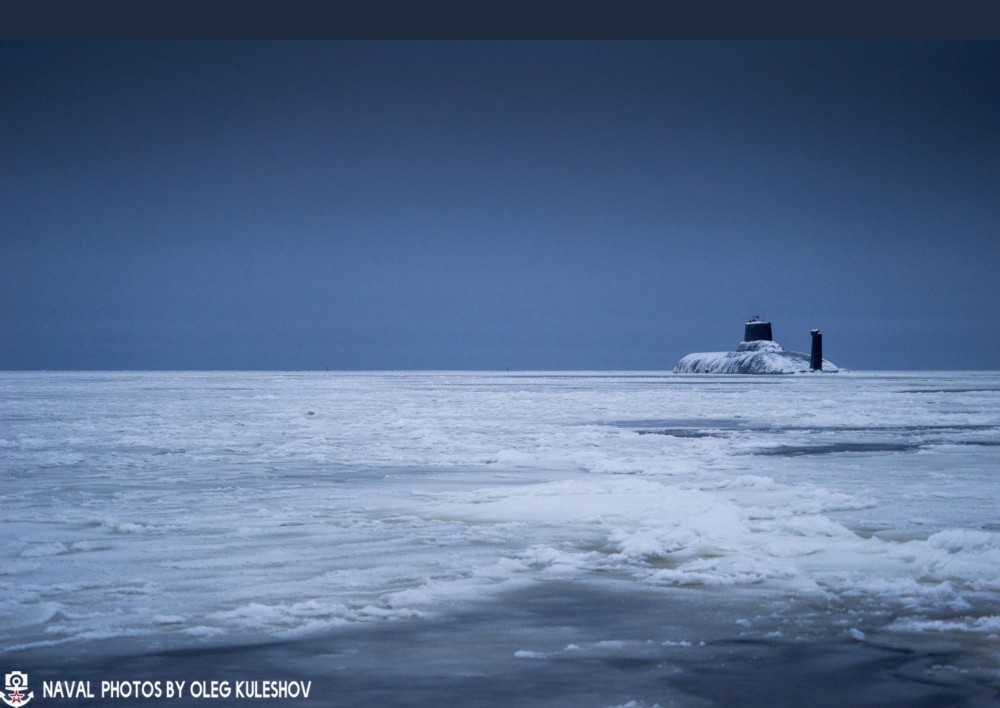 Mid-winter voyage for «Dmitry Donskoy» on her way through the ice in the White Sea. Photo: Oleg Kuleshov

Earlier this week, the Severodvinsk-based naval photographer Oleg Kuleshov captured Russia’s only still operating giant Typhoon submarine, the TK-208 «Dmitry Donskoy» sailing out from Belomorskaya Naval Base in Severodvinsk on the coast of the White Sea.

What mission the giant submarine is up to is not know to the public. On Thursday, Oleg Kuleshov captured another nuclear missile submarine breaking the mid-winter ice out from Severodvinsk.

Kuleshov runs a comprehensive blog-site with news and photos of naval vessels and yards in Russia and has granted permission to the Barents Observer to republish the images.

«Dmitry Donskoy» was the launch vessel of the Typhoon class and entered service armed with 20 nuclear missiles in February 1982. Unlike the five other Typhoon submarines, she still sails, but no longer armed with nuclear missiles on alert. Since 2005, the submarine has served as a test platform for new weapons, most known is the Bulava missile now placed on the newest ballistic missile submarines of the Russian navy; the Borei-class.

The 175 meter long submarine is powered by two 190 MWh nuclear reactors and became well-known to the public in Scandinavia last summer when sailing from Severdovinsk, via naval bases on the Kola Peninsula to St. Petersburg participating in the celebration of the Russian Navy Day.

The submarine on Kuleshov’s photo from Thursday this week is «Tula» - a  Delta-IV class ballistic missile carrier.

The Russian Northern Fleet operates six vessels of the class, each holding 16 nuclear missiles. The Delta-IV class submarines are all normally based in Gadzhiyevo on the Kola Peninsula, but are in for overhaul and repair at the Zvezdockha yard in Severodvinsk.

«Tula» has been at the yard for large-scale overhaul since December 2014 and is now likely to sail to her homeport on the Barents Sea coast. The submarine is 30-years old.

Oleg Kuleshov writes on his blog that the final tests of the submarine were done in December and all the vessel’s operational systems are reported to be in line with the scheduled tasks.

Next Delta-IV submarine in line for upgrades after «Tula» is «Bryansk» the Barents Observer reported earlier this year.   The submarine is likely not to be docked at Zvezdockha before March 2018, the blog-site Flotprom.ru reports. With the round of large-scale upgrades, the fleet of Delta-IV submarines will be operational till the late 2020s.