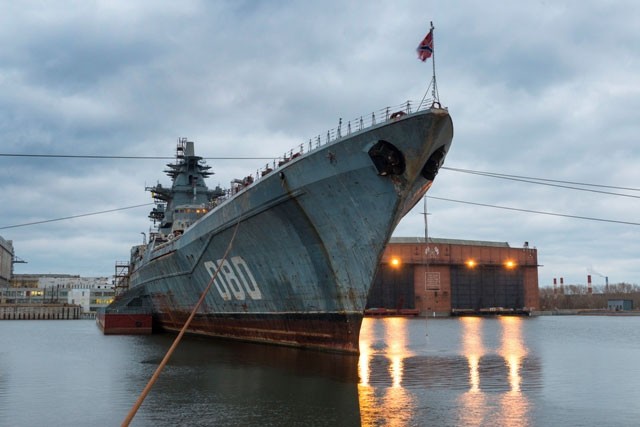 And there will be more. Representatives of the shipyard hint that there is still a long way to go with Russia’s nuclear missile cruiser «Admiral Nakhimov».
By

The 251 meter long vessel in July 1997 sailed through the Barents Sea and into the Northern Dvina river to Navy city Severodvinsk. Since then, the nuclear-powered ship has laid docked at shipyard Sevmash.

Officially, reconstruction started in 1999 and the ship of the Kirov-class was to return to active duty few years later. Then the plan was revised, not once and twice, but numerously.

In 2015, shipyard Sevmash said that 1,000 workers were involved in the reconstruction and that the work staff would soon be increased to 3,000. The ship was to be completed in 2018.

Then, in 2017, it became clear that the vessel would be completed only in year 2021. But also that might be too optimistic.

Leader of the United Shipbuilding Corporation Aleksey Rakhimov now says that the Ministry of Defence has made additional changes in its plan for the ship’s reconstruction and upgrade.

That will lead to additional work, he makes clear.

«The reconstruction work proceeded according to schedule. [But] with regard to the comprehensive changes made in the technical assignment by the Ministry of Defence, we probably either have to amend our contract or sign an additional agreement,» Rakhimov told Interfax.

The leader of the state-owned Shipbuilding Corporation maintains that the end date of the reconstruction remains 2021-2022, but that «details remain to be clarified».

The ship, originally built in 1986, will become the most powerful vessel in the Northern Fleet when reconstruction is completed.

Rakhimov underlines that the «Admiral Nakhimov» will be «armed to the teeth» and that Russia with the ship will «unpleasantly surprise its «partners» with the number of vessels on board.

Among the armament will be the cruise missile Kalibr and the new missile system Poliment-Redut.

The «Admiral Nakhimov» was included in the Soviet Navy in 1988. It was the third battle cruiser of the Kirov-class.

Russia today operates one Kirov-class vessel, the “Pyotr Veliky”, which is expected to dock in Sevmash for modernisation as soon as the «Admiral Nakhimov» comes back in duty.